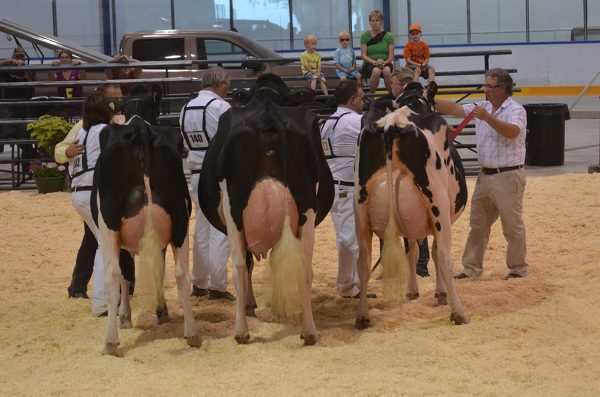 MAXVILLE — Pierre Boulet knows how to pick a winner. The Quebec dairy farmer put just four cows in the ring — including one he’d had only a few short months — but walked away with the grand and reserve champions at the Maxville Holstein Show.

“It’s tough to complain when you have just four cows and you have the reserve and grand,” said Boulet, who co-owns the reserve champion, Cobequid Goldwyn Leno and the grand champion, Cavanaleck Dempsey Bozica, who had a string of admirers stopping by her stall ahead of the show. “Everybody came to see her. They really like that cow.”

Boulet, who owns Bozica with Ferme Yvon Sicard of St-Justin, Que., snapped up the senior three-year-old in April, just days before she was tapped as honourable mention intermediate champion at the Ontario Spring Discovery Show. Right away, he liked the well-balanced cow with an impressive udder.

“She’s so perfect in her udder. I expect a lot from her,” said Boulet, who runs Ferme Pierre Boulet Inc. in Montmagny, Que., about 80 kilometres east of Quebec City, with his girlfriend, Katie Coates.

The champ is judge Pat Conroy’s kind of cow.

“As soon as I saw her in the ring, I thought to myself, ‘it’s going to be hard to beat this cow.’ She’s built to last,” said the cattle judge from Angola, Ind., praising her as wide chested with a great spring and openness to her rib and a tremendous udder. “She was the total package. There won’t be too many that are near as balanced or as correct from end-to-end as her.”

Conroy critiqued 129 head in all, giving the edge to square, balanced cows with strength and noting the great udders at the top end of the classes.

He was wowed by the udders on the cows shown by the premier breeder and exhibitor, perennial winners, Simon Lalande and Kim Côté of Ferme Blondin.

“They’re awesome uddered cows and they’re cows that look like they milk.”