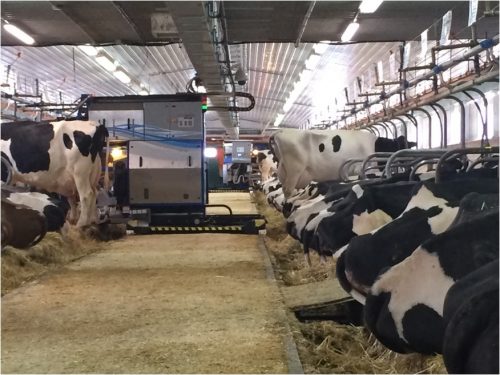 SAINTE-MONIQUE, Quebec — Milkomax, which calls itself the only global manufacturer of milking robots for tie-stall farms, just launched its second-generation milking robot called the ROBOMAX.

The ROBOMAX’s Fleximax software permits the farmer to select a cow’s milking frequency between one to four times a day. Milk analysis happens in real time and the Herd Management Interface gives access to data including milk production, lactation curves, and cleaning. Automatic repeat after a failed milking can be enabled.

Fullwood Packo technologies allow the farmer to manage both tie-stall and free-stall cows on the same farm with the one robot. The ROBOMAX moves down the centre aisle from stall to stall, milking one cow at a time.

Tie-stall barns still account for 67.2 per cent of Ontario dairy barns and 90.6 per cent of Quebec dairy barns, according to Agriculture Canada’s 2020 report.

Milkomax has been designing, manufacturing, and distributing milking robots specifically for tie-stall farms for over a decade. The second-generation robot was developed by a specialized Milkomax team of designers and technicians during 2019-2020.

Milkomax obtained a contract with Japan to deliver the ROBOMAX to the nation’s farmers. The distribution agreement will last until 2024 and will have direct spinoffs of more than $8 million. It will help nearly 10,500 Japanese family dairy farms automate their milking process “counter the threat of their disappearing due to the lack of succession and a lack of manpower,” said a Dec. 1 press release.

“We are proud to be able to actively participate in the growth of a Quebec-Canadian company that designs and manufactures products that are unique in the world in the field of milking robotics,” said general manager Gary Desmarais.