PALMERSTON — Given the demand for grain storage in the province, industry sources suggest that six southwestern Ontario elevator facilities slated for closure should be able to land new ownership.

Ontario Grain will exit the market and shut its remaining operational elevators in Shetland, Staples, Talbotville, Princeton, Becher and Palmerston, as announced last month by majority shareholder Sollio Agriculture (formerly La  Coop fédérée).The firm will seek buyers and honour existing contracts during an “orderly wind down” this harvest season, according to a statement from the Quebec-based owner.

Sollio says Ontario Grain is “unsustainable” amid “financial challenges in the grain sector” — an eyebrow-raising claim in some quarters. 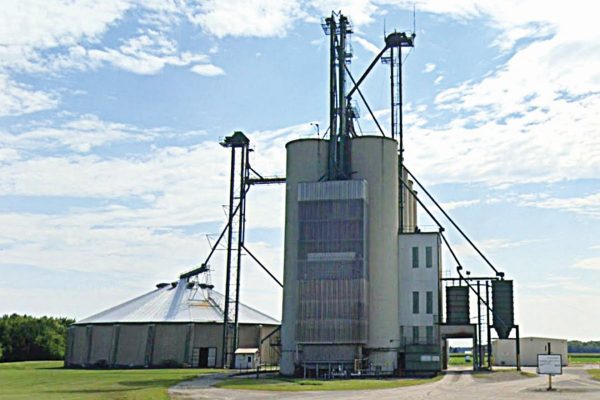 A source with knowledge of the province’s grain-handling industry speculated that Sollio’s move stems from the fertilizer side of the co-op’s business. “Last year, all of these high prices and tariffs came into place (on fertilizer), and a lot of companies suffered on that if they didn’t make the right move. I think that low-end grain division … was going to take the hit.”

The same source expressed confidence that new ownership would be found to keep the sites operating. “There’s not enough storage in southwestern Ontario to handle that loss,” he said, noting the targeted facilities are not old or rundown. “One of them is almost brand new, so it doesn’t make any sense.

“I would expect somebody will pick them up to operate…. There’s a lot of opportunity down there.”

A similar industry source told Farmers Forum that they agreed such an outcome was likely, given the market demand for grain storage in Ontario.

Ontario Grain already closed two other aging elevators, in Melbourne in Rutherford, last February, as Sollio entered “a phase of consolidating its acquisitions and optimizing its assets.”

It was only four years ago that Sollio acquired Ontario Grain’s assets as part of a national growth strategy.

On the most  recent move, Sollio Cooperative Group CEO Casper Kaastra explained, “The extraordinary events of the past two years causing global economic disruption led to unexpected, significant business challenges and a volatile commodity market. Ontario Grain made this difficult but necessary decision after an exhaustive analysis of all available options.”

The co-op is in its 100th year of operation. “We’re proud of our history and the support we’ve been able to provide for farmers, our members and clients, and the communities where we operate,” Kaastra said. “To continue that vitally important function for another hundred years, we must take actions to address the ever-changing challenges we face in the agriculture industry.”