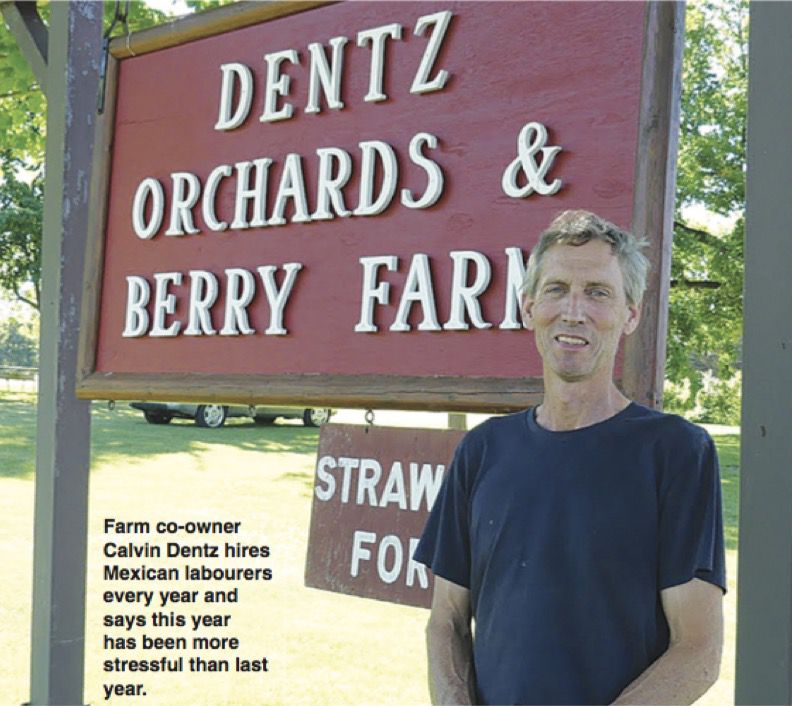 IROQUOIS — Berry farmer Calvin Dentz shakes his head wearily and brings up the subject of hockey, a tone of anger in his voice.

“I couldn’t believe it,” he declares on a bright June 6 afternoon, already several days into a record early strawberry harvest at his family’s Iroquois-based operation.

It wasn’t the Toronto Maple Leafs’ ignominious exit from the Stanley Cup playoffs perplexing the Dentz Orchards and Berry Farm co-owner. No, it was learning that NHL hockey players had been granted a pass on the 14-day quarantine rule so that they could compete in the playoffs. The government granted the waiver, Calvin points out, while three of his farm’s essential agricultural workers from Mexico still sat in mandated self-isolation at a local motel, even though they were vaccinated upon setting foot in Canada.

They were the last of 32 temporary foreign workers from Mexico to arrive at the Dentz farm, which has one of the largest contingents of foreign workers in Eastern Ontario. 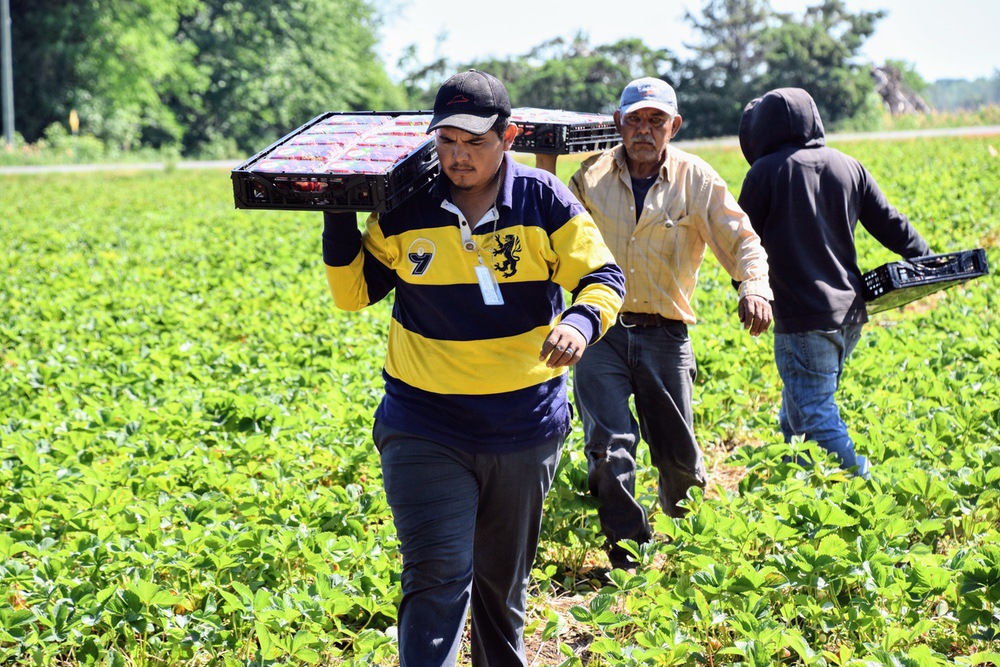 Jorge David Enriquez-Esparaza and Adan Arredondo-Lopez carry trays of strawberries from the field. Picking began May 28th, the earliest ever start date at the Dentz farm.

Every single worker was forced into quarantine for two weeks while Dentz had to pay the workers five hours a day and cover the food and hotel bill. While the federal government offered $1,500 per worker to help defray these costs, the sum “doesn’t go very far when you are paying for wages, food delivery, bunkhouse supplies like laundry soap, toilet paper and cleaning supplies, masks, hotel stays, and transportation to and from Toronto airport,” says Calvin’s wife, Cathy, partner in the operation.

Combine the vagaries of the weather — always a pressure in farming — with the continued uncertainties and logistical challenges of pandemic policies — and it’s a recipe for a mental toll Cathy Dentz said. “Seriously, they talk about farmer mental health. Honestly, the last two years have just been brutal.”

For starters, they’re still short of labour. The farm applied for 38 Mexican workers, but couldn’t get six of them “for various reasons,” she says. 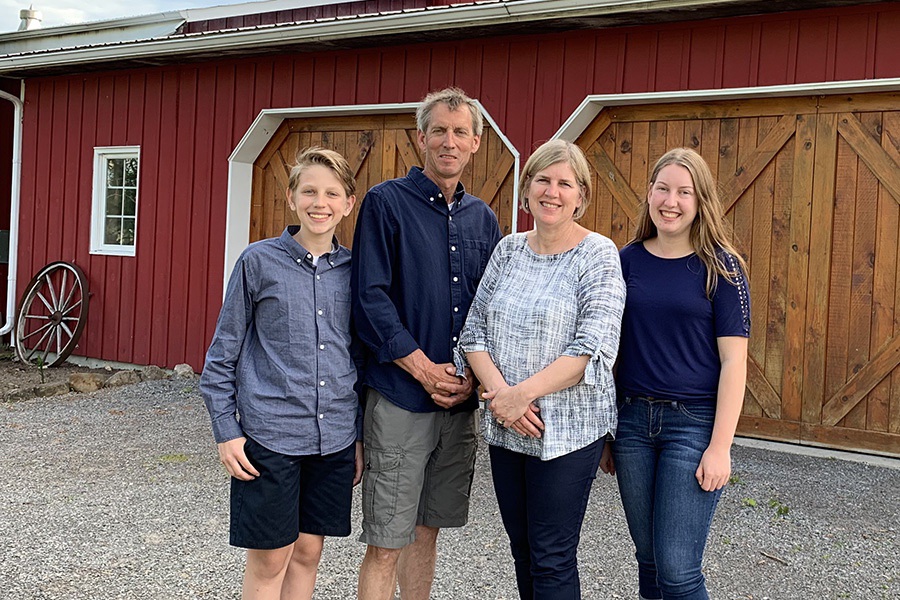 Calvin and Cathy Dentz and their children, Mark and Laura. Courtesy photo

“Housing them, organizing meal delivery, groceries and banking is pretty problematic. And we’ve had to drive to Toronto to pick up the guys — because they can’t fly on a domestic flight to Ottawa,” she says. The farm even hired a local limousine service to pick up the groups — seven of them — as they arrived this spring.

During quarantines, the farm was repeatedly subject to “all the extra paperwork for the Switch Health thing,” she says, referring to the federal quarantine oversight program with its self-administered third test on day eight of each worker’s self-isolation. (The incoming migrants are already tested before boarding in Mexico and again after landing in Canada.)

Preparing to fill out the paperwork an eighth time, she concedes the process has been “tweaked” and made less onerous. “But it took months and lots and lots of complaints from farmers. It’s been really tough on us.”

Calvin says they went back and forth with federal officials and the local health unit for weeks this spring over the capacity of their main bunkhouse. The two-story structure was approved for up to 40 workers before COVID, but the feds insisted it be limited to 14 throughout the season — the same as if used for quarantining the entire time. Finally, he says, a federal official agreed the additional spacing was mandated only “during quarantine” — as written in the regulation. There was no acknowledgment of the enormous stress placed on the farm as they worried about having the capacity to house their workers.

“Last year was bad, but I think this year was even worse,” he says of the uncertainty around sourcing the Mexican labour the farm has relied upon for decades. “Every government agency out there thinks they have to have their finger in the Seasonal Agricultural Worker Program pot and has used the winter to up their game.” 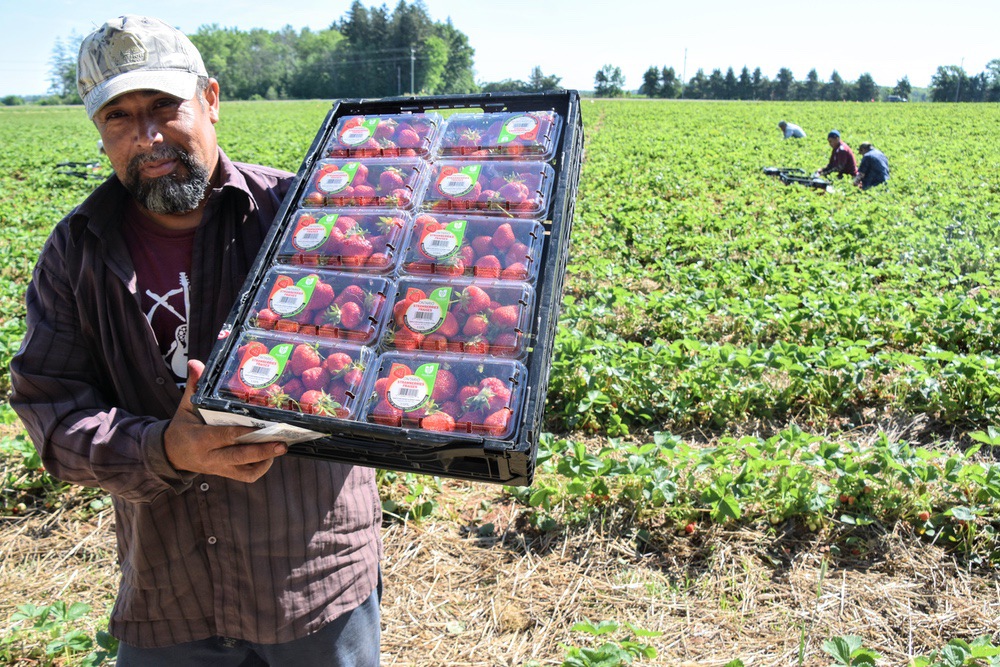 Last year also saw the rise of small but vocal socialist groups crying exploitation of farm workers. However, these men can earn much more in one day on the Dentz farm than in one week working in trades anywhere in Mexico outside Mexico City. At the Dentz farm, they earn more than $20 per hour — including the program’s $14.39 minimum wage plus piece work during crop harvesting. They pay Canadian taxes when they’re here and receive OHIP coverage in the event of required medical care. They and their employer also contribute to the Canada Pension Plan, making them eligible to collect from this country when they retire.

The workers also willingly return year after year. Three of them at the Dentz farm have been coming back for more than 20 years.

The temporary foreign worker program is a great program, Dentz says, despite media scrutiny last year when three Ontario workers died of COVID-19. “It’s the best foreign aid program going. It’s not a handout, the men are working for their wages.” 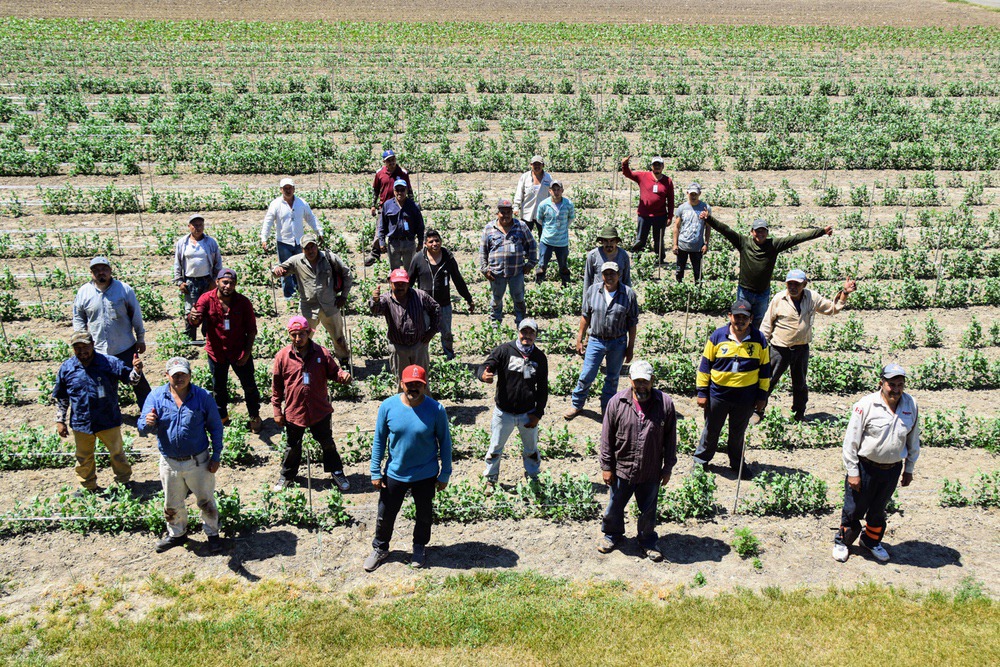 Some of this year’s workers at Dentz Orchards and Berry Farm. Nelson Zandbergen photo, Farmers Forum