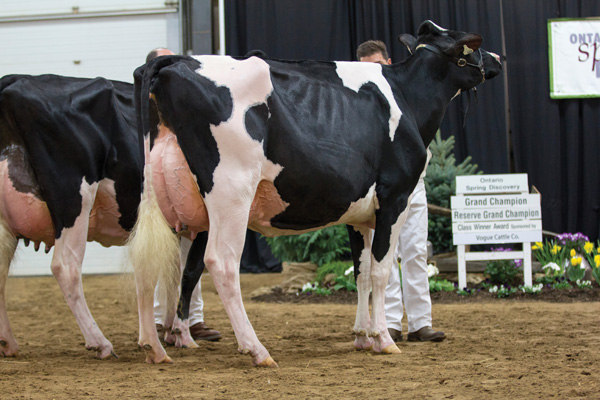 ANCASTER — Bosdale Gold Luster came primed for the ring, casting off any doubt that a cow milking almost 10 months could come out on top.

“She was in excellent form. When they’ve been milking that long, it’s always more challenging when competing against cows that are in their wedding clothes, so to speak,” says Woodbridge dairy farmer Ari Ekstein, who co-owns Luster, the grand champion Holstein cow tapped by judge Jamie Black of Constable, N.Y. at the Ontario Spring Discovery Show on April 23 in Ancaster.

Extremely balanced and dairy with a fantastic udder at first calving, Luster caught Ekstein’s eye on a visit to Bosdale Farms Inc. in Cambridge. Worth a second look, he bought the nearly faultless cow last September with partners Glen Beckett of Beckridge Holsteins in Keswick, Oscar and Eric Dupasquier of Dupasquier Holsteins in Guelph, and Francesco Bertola of Agriber Societa Agricola SRL in Italy.

Since then, Luster has put together a string of wins, including reserve grand champion at Autumn Opportunity and honourable mention intermediate champion at the Royal Agricultural Winter Fair.

Repeating last year’s one-two finish, Ekstein also showed the reserve champion and earned premier exhibitor honours along with the rest of the team at Quality Farms Inc., his father Paul, farm manager Don Schwartz, and Manuel Gutierrez, who looks after the show cows.

“It’s about passion, drive to succeed, and hard work,” he says.