PUBLIC COMMISSION: Why was the Emergencies Act needed to quash non-violence? 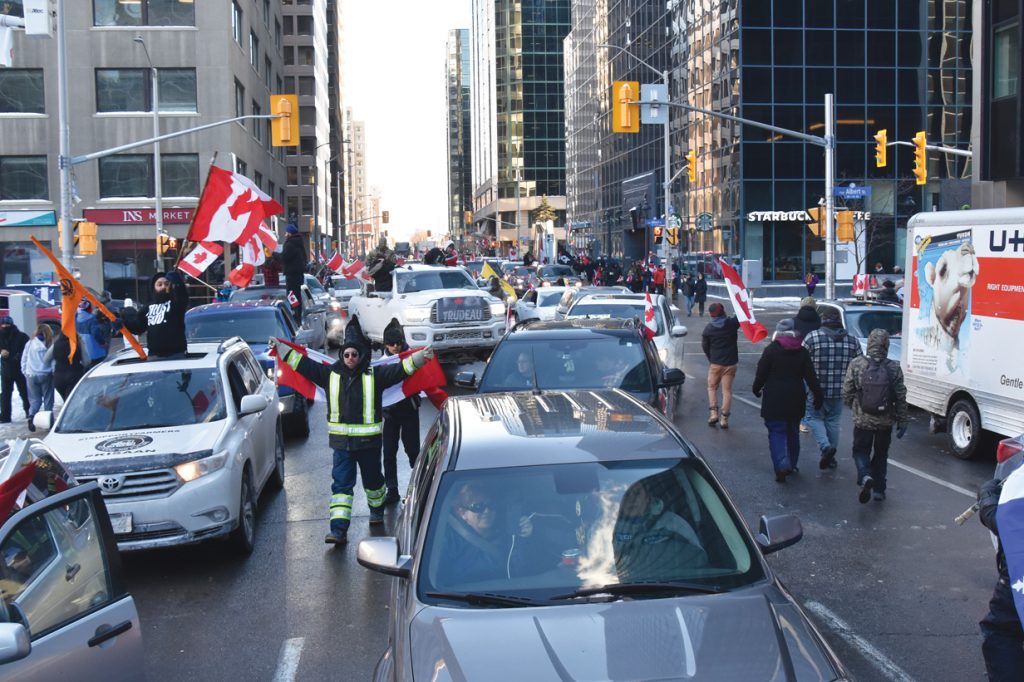 According to his own testimony at the Public Order Emergency Commission, Bell didn’t say that the protest was violent but that he “felt” violence. What?

Chief Bell, please explain. “It was the trauma that the community felt,” Bell told the commission on Oct. 24. “It was the extreme circumstances that they were exposed to.”

“Not the criminal code definition” of violence, he clarified, “But the violence by the incessant horns blaring. By having trucks run 24/7. By having people intimidate them and follow them and by having people rip masks off their head. By feeling sheltered in their homes.”

“It’s 300 to 500 trucks simultaneously for 24 hours a day, seven days a week. It’s not tooting a little horn. It’s the incessant noise pollution that is being inflicted on people.”

It’s a bit rich to talk about honking as “violence,” especially when long after it ended, the police responded with clubs, the back-end of a rifle, horses and anti-riot tanks.

People’s lives were not hanging by a thread. There was no need for the government to pull-out a war-time act to assault peaceful, unarmed protestors whose biggest crime was turning about eight blocks into a parking lot celebration.  Surely, the crime data tells the story. The two weeks from the beginning of the protest to when the emergency hammer to fight terrorism and war came down, how many police charges of violent crime were laid? Five.

It’s more dangerous in Ottawa’s Byward Market or after a Panda game, the annual student football game between the two city university teams.

The protest morphed into a freedom festival that attracted families to the city centre for bouncy castles and barbeques. My own children wanted to go every night. We went many times. One of my kids made muffins for the truckers and farmers. There were pigs on a spit, hot dogs and burgers, fresh popcorn and dance parties at four or more intersections every weekend. There were outside prayer meetings and services every Sunday. People loved it. There was so much food and so many group hugs that a young farmer, who drove up from Seaforth, told me: “I haven’t felt this good in years.”

Superintendent Patrick Morris, commander of the Intelligence Bureau of Ontario Provincial Police, testified October 19 that the convoy was very peaceful. “The lack of violent crime was shocking,” he said. City staff reported no violence and protestors moved trucks to ensure there were necessary emergency lanes. The city manager testified that he had reached an agreement with the protestors to move more trucks to increase traffic flow and they began moving vehicles the day before the prime minister invoked the Emergencies Act.

I wouldn’t have taken my children to the Freedom Convoy protest if I thought there was a remote chance of being harmed. To suggest that the Emergencies Act was needed to end the most peace-loving happy-faced protest I have ever seen is one of the most egregious lies I have ever heard. This is Canada’s most disgraceful moment.

The real violence started when the Emergencies Act was invoked and the police went after those who stood up for the rest of us to pressure governments to end vaccine mandates, lockdowns and restrictions to our constitutional freedoms of movement. On the final protest weekend in front of the Chateau Laurier Hotel, masked police officers began beating up protestors.

When the children left, police unleashed the horses. Bell should know all about that. It’s his city. He must be well aware of the tank-like armed vehicles, the police officers in dark green and black riot gear with thick batons, hard helmets with visers, long guns and hard boots, pulling people out of the crowd. Now that’s violence. I saw police pound one guy who disappeared under their fists. My 17-year-old daughter saw a police officer hit a man with the back-end of his rifle. She was pepper sprayed for watching. I later spoke to a young Quebecois man who was weeping in his truck. “They beat us like Gestapo,” he cried. “Our own people. Some ladies. Some old men got beat up.”

I interviewed a lot of people. A man who witnessed the horses, said they “would charge right onto the people. It was a disgrace, disgusting. It’s amazing how they can do that on peaceful protestors.”

That same day a Nova Scotia man was arrested. “The police have become violent,” he told me, explaining that he was dragged from the crowd, locked up in a transport vehicle and dumped three kilometres from downtown. He was not charged. Freedom Convoy lawyer Brendan Miller said the police essentially kidnapped protestors and dropped them outside the city centre.

If Bell were really concerned about the “violence” of the protestors, then somebody should have taken his hand and walked him to a “safe space.”  The truth of the matter is that the Trudeau government was embarrassed and the Emergencies Act was his temper tantrum response. A chat with the protestors could have ended the protest. Instead he called his police henchmen and in one weekend destroyed the reputation of police officers as the good guys.

Our government encouraged banks to seize personal bank accounts. Now the level of distrust of government has never been higher and our prime minister has himself to blame.

On the last day of the police assault on the freedom convoy a Newfoundland fisherman sat stunned in his car on Kent Street. “They’re not negotiating, they’re just jack-booting everybody to the ground,” he told me. “They’re smashing windows, dragging people out, pepper spraying people. It’s insane.”

His wife began crying next to him as he added: “We drove all the way from Newfoundland to make our voices heard and no matter what happened, no matter what they threw at us. Every time they pushed back, every time the horses engaged, every time the tear gas was used, nobody responded with violence. They just sang O Canada, until they were knocked to the ground and dragged away.”

The problem with trying to tar the freedom convoy as violent is obvious: there were far too many witnesses.

(Note: All interviews have been video recorded and can be viewed at farmersforum.com.)