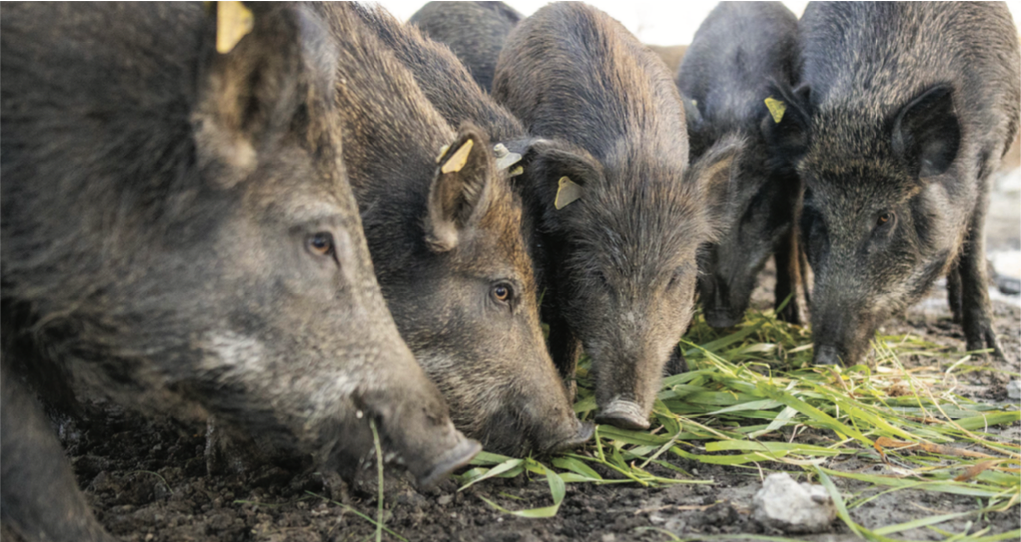 ONTARIO — Ontario’s proposed ban on raising wild boar threatens to chop the revenues of a small number of farmers supplying this specialty meat to markets and restaurants.

The “Eurasian” wild boar is the granddaddy of all domestic pig breeds, none of which are native to North America. But it’s the keeping of wild boar alone that’s been caught up in recent concern over an emerging “wild pig” population in Ontario — an interbreeding mix of escaped conventional pigs, pot-bellied pet pigs, as well as actual wild boar.

The owners of Trillium Meadows Red Deer and Wild Boar Farm say they were blindsided this spring when the Ministry of Natural Resources and Forestry placed wild boar on a proposed list of 13 newly recognized invasive species — and proposed a ban on raising the presumed porcine invader as part of a wild pig control strategy. The prohibition, if passed, will be phased over two years.

“It means I will have to close down,” says Hans Lindenmann, who keeps a captive herd of about 70 to 100 wild boar behind double fences, near Vankleek Hill, along with 100 red deer. He and his wife, Marianne, have been selling wild boar meat to a variety of farmers’ markets for over 20 years.

Along with sales of deer meat, it’s their primary source of income. Lindenmann, who spoke with Farmers Forum June 10, says he only became aware of the proposed ban a week earlier. “One of my cus- tomers called me up … and I had no idea.”

A 7-week public comment period closed June 7 via Ontario’s Environmental Registry. Lindenmann says he just managed to get a letter in by deadline. As niche players, they don’t have an industry association tracking these things on their behalf, he explains.

Lindenmann says they’ve been gearing up for their presumed best season ever — given surging demand for local food and huge popularity of farmers’ markets amid the pandemic. “But then, to get this other news, is kind of devastating.”

He’s been trying to raise awareness by distributing yers at farmers’ markets about the possible disappearance of the popular product from Trillium Meadows. “People were not happy when they saw that,” he says. He added that his farm is known especially for sau- sages made from a combination of deer and boar meat.

Concern looms, however, over wild pigs spreading disease and parasites to the hog and pork industry. Producers fear they could even become a roaming repository for African Swine Flu if that bug arrives in Canada.

Banning Eurasian wild boar production “is a proactive approach to protect animals and crops,” Ash says in an email to Farmers Forum. Distinguishing them from domesticated pig breeds, she notes that wild boar possess “characteristics that make them highly adaptable in the wild, and escaped or released animals have caused signi cant damage to crops and farmland in other jurisdictions.”

Ontario Pork, she says, is calling on the province to compensate or buy out producers required to shut down their Eurasian wild boar production under the proposed changes to the Invasive Species Act.

Various types of feral pigs in the wild (not just wild boar) have been observed 51 times in the province over the last two years, based on stats published by iNaturalist, an amateur ecology website where Ontarians can report sightings.

Near Sebringville, Perth Pork Products co-owner Fred de Martines says his customers appreciate the flavour, finer texture and leaner nature of his wild boar pork. Though the operation raises a variety of swine, including heritage breeds, offering actual wild boar gives them “an edge,” he says.

It makes no sense, de Martines adds, to go after farmers who have captive animals when the problem is hogs already free in the wild. “They’ve come up with the solution that you’ve got to get rid of all the farms that aren’t the problem,” he scoffs. “To tell me that I am causing something that I am not causing is ridiculous.”

The next “logical step” to the current line of thinking, he suggests, is an eventual ban on pasturing any kind of pig outdoors, followed by elk and deer.  He would rather the province, through OMAFRA, develop best standards and production protocols for raising wild boar.

Noting he’s no fan of wild pigs free on the landscape, either, he asserts: “I want them gone, too, because I don’t want them standing on the other side of the fence looking in at my pigs. Those are the ones you should get rid of.”

Both de Martines and Lindenmann point out that some of the actual observed wild boar population in Ontario could be the result of animals migrating here from the western provinces, where the species is more established.

If domestic producers are forced out of the Ontario market, expect wild boar meat from outside the province to fill the void, says de Martines, noting that Quebec and Manitoba producers will remain in the business if their Ontario counterparts are forced out.