Police raid farm of former raw milk seller Michael Schmidt who says he is obeying law; among three farms hit by crackdown in 2021

Schmidt and his wife Elise Vander Hout operate Glencolton Farms near Durham in Grey County and were surprised by a pre-dawn raid on Oct. 27.

Schmidt, who has championed raw milk for decades, said a team of police and health inspectors showed up at his farm at his Grey County farm at 5 a.m armed with a search warrant. But two months later, Schmidt said he is still waiting to see if he will be charged and there has been no follow-up from anyone.

“They blocked off the whole concession,” said Schmidt, of the on-farm raid. “It looked like the entire West Grey Police Force was involved. People were quite upset that police were involved in something like that.” 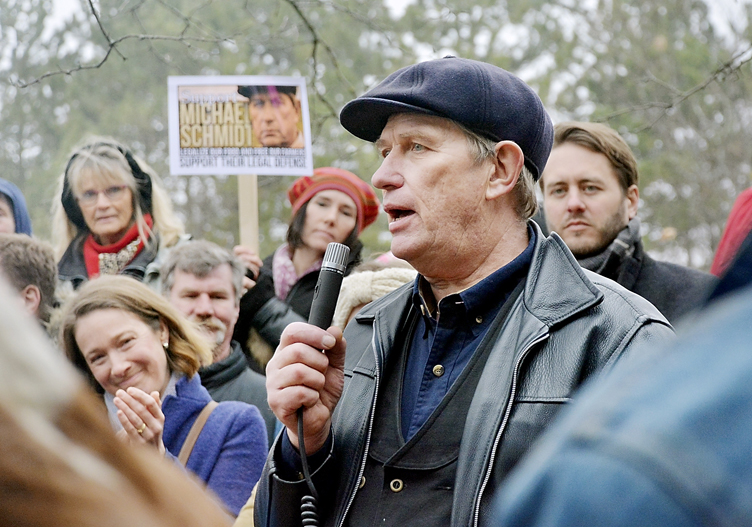 Vander Hout was presented with a search warrant to seize computers and records but she refused to allow police to enter the house. Schmidt said the police and officials broke into the locked dairy barn and seized some dairy products and other materials and left after two hours.

Glencolton Farms was the scene of a standoff in 2015, when about 70 protesters blocked provincial officials from removing equipment and evidence from the farm. Schmidt was charged and convicted following that incident and sentenced to two months in jail to be served on weekends but that was later reduced to one month of house arrest.

Schmidt said the large police presence was likely in response to the 2015 incident but he said it was unnecessary.
“There is always the possibility for dialogue, to talk about things. But this was a demonstration of force, with an army of investigators backed up by police,” he said.

In 2018 a judge ordered an injunction prohibiting Glencolton Farms from distributing raw milk. Schmidt insists he is obeying the injunction. He said the farm has shifted to other operations including pigs, horses, chickens and a bed and breakfast business. He said the raid may have been prompted by his efforts to breed and sell cows specific to the needs of homesteading families who want to be self-sufficient.

On April 13, officials raided Echo Valley Farms near Moorefield in Wellington County and later charged the owners Brad and Donna Martin under the Milk Act related to the alleged production of raw milk for clientele participating in a cow-share arrangement.
Donna Martin said an on-line court hearing is scheduled for this month.

Martin said the renewed enforcement could drive the raw market farther underground. “There is still a huge demand for raw milk,” Martin said.

She said the couple is considering switching to water buffalo milk production because it is not regulated under the Milk Act.“If they don’t want us milking cows, we will look into something else,” she said.

Shortly after the raid on the Echo Valley Farm, officials raided the farm of Steve Martin near the community of Clifford. When contacted, Martin confirmed an enforcement action had taken place on his farm but declined further comment.

Mike Elgert, a Renfrew County farmer who stopped distributing raw milk after a crackdown in 2018 said he is not aware of any recent enforcement actions in eastern Ontario. But he said raw milk producers in British Columbia are trying to negotiate a deal with the provincial government to distribute raw milk after it has been thoroughly tested for pathogens.

The Ministry of Agriculture, Food and Rural Affairs regulates the production and marketing of cow and goat milk in Ontario but a ministry spokesperson noted local public health units are responsible for compliance in their communities.

The ministry would not release information about enforcement actions in Wellington and Grey Counties but media officer Stacey Langdon-Edwards issued a statement saying the crackdown on raw milk sales was necessary to maintain “a strong food safety system.”

She also said that “unpasteurized milk may contain harmful bacteria, including campylobacter, E. coli, salmonella, and listeria, which can lead to serious health conditions. That is why in Ontario and Canada, the sale or distribution of unpasteurized milk and milk products, and the operation of a dairy plant without a licence is prohibited.”