Police escort 200 people from closed farm as some steal pumpkins 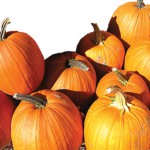 By Tom Collins
MARKHAM — Some visitors had trouble with the word “closed” at Reesor Farm Market on the Thanksgiving Monday.
Despite signs stating the farm was closed, York Regional Police had to be called in when 200 people descended onto the farm in Markham, north of Toronto, some to take pictures and others who turned pick-your-own into pinch-a-pumpkin.
Some visitors bragged on social media about looting the pumpkins, but farm owner Jay Reesor believes the majority of people just didn’t realize the farm was closed. From his version of events, a few people stopped by to take photos on Oct. 12, knowing the farm was closed, but wanting photos in beautiful autumn weather. Others drove by and saw the photographers in the field and assumed the farm was open. They parked on the side of the road to visit. Other drivers saw a crowd and also stopped, escalating the cycle of events.
A few visitors wanted to buy pumpkins and left money for what they took. Others, thinking the farm was open, may have been frustrated they couldn’t find staff to give money to and walked away with the pumpkins, Reesor said.
“Even though we had a rope across the driveway and a sign clearly stating that we were closed, I believe that many people who were there really did not know that we were totally closed because of the mass of people that were there,” wrote Reesor in a Facebook post.
Farm staff eventually arrived, and two York Regional Police officers showed up to herd people off the property.
Reesor and the police are asking people who took pumpkins to come back and pay for them. The police are investigating the thefts and are treating it like store shoplifting, said police officer Laura Nicolle, who added this is the biggest theft of pumpkins she’s encountered.