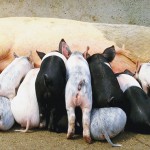 LISTOWEL —There were two thefts of pigs in Western Ontario recently. The OPP are looking for 569 stolen pigs and are confident that the little piggies didn’t go to market.

Sometime between June 28 and 29, 69 pigs were stolen from a farm on Krauter Line at Ethel, west of Listowel, after someone entered the barn through an insecure back door. The pigs’ value is estimated around $3,000.

Police say the pigs were stolen using a large truck and trailer and that due to set schedules at local sale barns and processing plants, it is unlikely the pigs were sold there without someone finding out.

Walter Petheram, secretary-treasurer of the Haldimand-Norfolk Pork Producers, told the Simcoe Reformer that a theft of this size would require someone experienced with pigs.

“You would have to know what you’re doing and you would need more than one person,” he told the newspaper. “I can’t see how they would get very far with 500 pigs. They’re bound to get caught wherever they go.”

Pig rustling is not uncommon. Recent cases include:

• 23 pigs stolen from Blue Sky Farms in Saskatchewan on Aug. 26.

• Two men were charged on Feb. 2 after stealing $25,000 in cattle and hogs and selling them at sale barns in Iowa.

• Last October, a Pennsylvania man stole 70 piglets, sold them for $10 each to another man, who would then sell them to farmers for $25 each.

• An Iowa man was sentenced to a month in jail and two years probation in 2014 after selling 195 pigs that belonged to the owner of the farm he worked at.