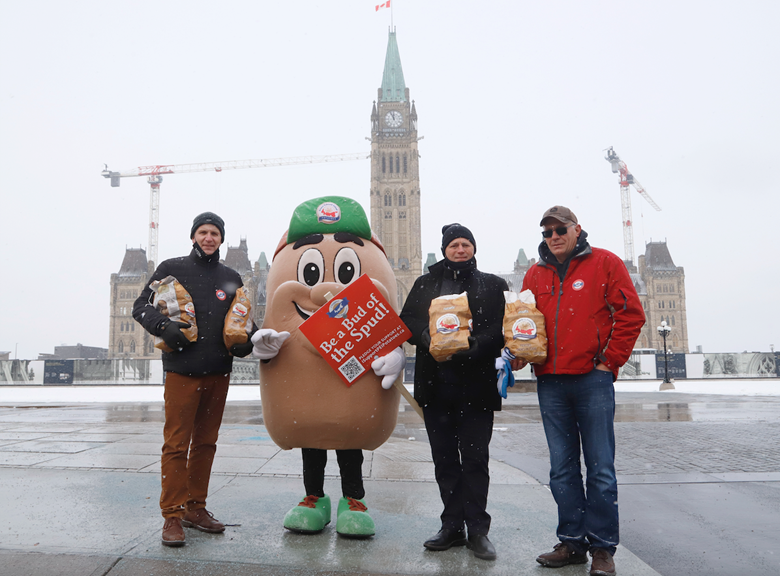 Members of the PEI Potato Board, Greg Donald (left) and Island potato farmer John Visser (right), are joined by Tate the Tater and PEI Premier Dennis King, Wed., Dec. 8, in front of Parliament, to help distribute 6,000 bags of fresh table PEI potatoes to passersby — and support Island farmers in their quest for renewed access to their loyal customers in the U.S.

OTTAWA – With an export ban choking their industry, hard-hit potato growers from Prince Edward Island were joined by their premier, Dennis King, while handing out sacks of the stranded spuds to 6,000 passersby off Wellington Street at Parliament Hill.

The small group of islanders took part in the Dec. 8 event to draw attention to PEI’s plight. They want a reversal of the sudden ban that has barred shipments of PEI potatoes to the U.S. since Nov. 22 — cutting off a vital, $120-million market for the sector. 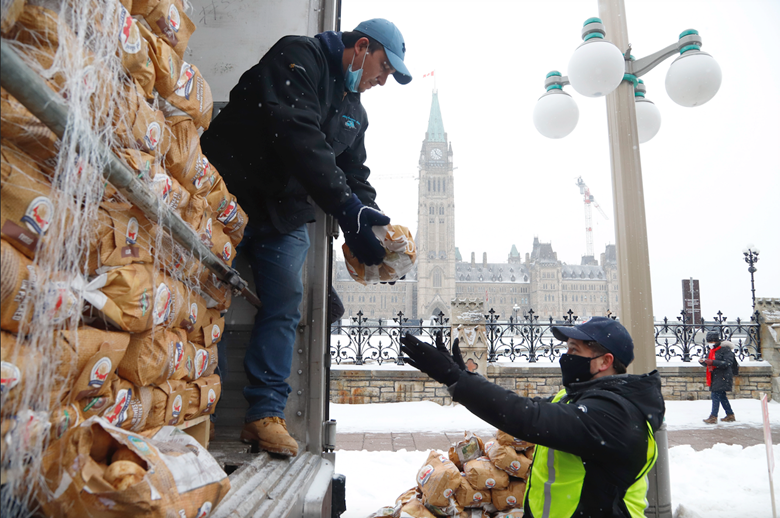 Spuds in the snow: A group of PEI potato industry representatives travelled more than 1,300 kilometres to distribute fresh PEI potatoes to passerby in front of Canada’s Parliament, Wed., Dec. 8, 2021.

The PEI Potato Board estimates some 16 million pounds of potatoes, worth more than $4.8 million, was lost just in the three weeks after the ban’s imposition.

“Losing a large part of your loyal and regular customer base, so suddenly and at this time of the year, is a huge defeat and, quite frankly, a catastrophe for our family farmers,” says Greg Donald, general manager of the PEI Potato Board, an organization representing more than 175 potato farmers in Canada’s smallest province. “If there’s any consolation it’s that people on both sides of the border seem to care deeply about our wellbeing and would like to see a return to normal and friendly trade relations. People appreciate our potatoes and don’t see a reason to penalize our farmers in this way.”

Representatives from national organizations such as the Canadian Federation of Agriculture, the Canadian Cattlemen’s Association and the Ontario Potato Board also attended to show their support.

“Even with the cold and snow, the good people of Ottawa that we met were all smiles, which is what we like to see when we’re trading in potatoes,” said John Visser, a third-generation farmer from Victoria, PEI, who joined the group.

King’s provincial government on Dec. 10 announced a new loan program for Island potato farmers as well as a new wage reimbursement program for the potato and trucking industries.