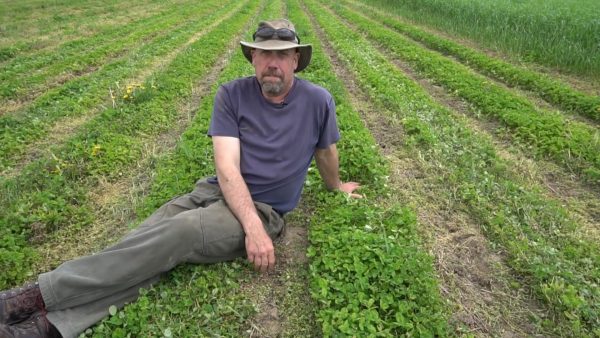 CHATHAM-KENT – For the last 10 years, Laurent (Woody) Van Arkel has farmed with three goals in mind: disturb the soil as little as possible, leave the ground covered as much as possible, and keep a living root system in the soil as much as possible. He strip-tills corn and sugar beets and no-tills wheat, soybeans, and sunflowers at his cropping and hog-finishing operation south of Dresden.

His efforts were recognized last month by the Ontario Soil and Crop Improvement Association (OSCIA), which presented him with its 2022 Soil Champion Award. The award is given annually to a strong soil advocate.

Beyond his goals of the last decade, the recipient has been looking at ways to reduce tillage and feed the soil biology at his farm for close to 40 years.

Today, manure from his pigs is applied after winter wheat, followed by a cover crop. For the last three years, he’s been using perennial cover crops between row crops as part of one of Agriculture and Agri-Food Canada’s Living Lab projects. The approach sees him plant corn (or other commodity crops) between pre-existing, perennial strips of clover. He employs a special multi-row mower to keep the clover (or another cover crop) short while the main crop grows.

The resulting corn yield “still isn’t where I want it to be” but in 2021 “got much closer than in previous years,” he said in a recent video released by the Innovative Farmers of Ontario, an organization he serves as past president. The strip-till system offers “pretty decent weed control” with just two passes of the mower and no herbicides, he said.

Van Arkel’s “passion for soil health and his drive to continually look for new and better ways of doing things make him a worthy recipient of the … Soil Champion Award,” OSCIA President Warren Schneckenburger said. “Through his willingness to share his soil health experiences openly, he has become a valuable source of information for other farmers who are working to improve soil sustainability on their own farms too.”

Van Arkel also volunteers with the Ontario Soil Network and frequently speaks at meetings and events in Canada and the United States. He also showcases his farming experiences on Twitter, where he has almost 6,500 followers.