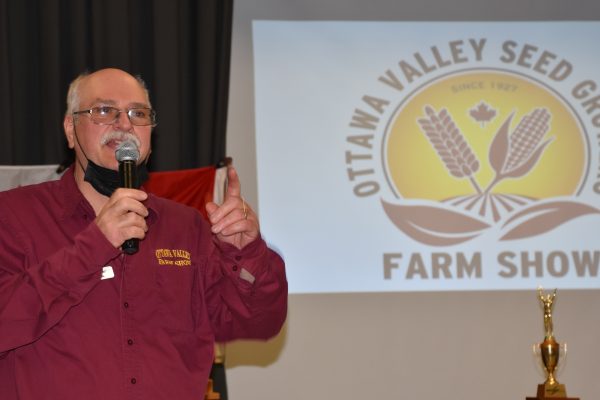 The 30th annual Pedigreed Seed Auction generated $25,450 for the Children’s Hospital of Eastern Ontario, including $14,735 fetched through online bidding on 53 donated items. The tally is well ahead of the $17,000 raised the last time the sale took place as an in-person only event at the last Ottawa Valley Farm Show in 2019.

In addition to bags of seed from nine seed companies, the lots on the virtual block ran the gamut from a tractor seat to artwork and baked goods. The auction’s conclusion coincided with the first banquet in years celebrating the seed and forages competition. No equivalent meal gathering of trophy winners has taken place since the Farm Show moved out of Lansdowne Park 10 years ago.

This year’s sale total was bumped up by CHEO bear centrepieces that went for $600 at the March 19 banquet at the Greely Community Centre.. OVSGA President Jeff Waldroff served as impromptu auctioneer.