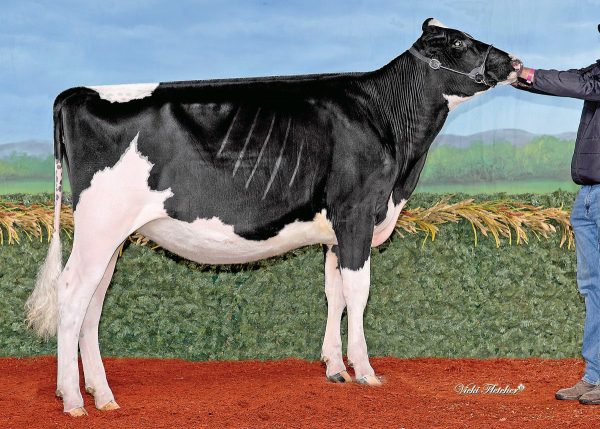 OSGOODE — For her owner, there was the sentimental echo of another great animal when Velthuis Doc Happy Dance pranced away as Champion Fall Yearling at the recent Quebec Spring Holstein Show. Happy Dance is a direct descendent of R-E-W Happy Go Lucky, a dearly departed cow Steven Velthuis bought — twice — to build up the herd at Velthuis Farms in Osgoode.

Velthuis recalled his $50,000 U.S. purchase of Happy Go Lucky as a heifer in Madison, Wisconsin, and how she fetched $200,000 from an American buyer about a year later. But he wasn’t done with Happy Go Lucky just yet. Eight years later, the Eastern Ontario dairy farmer bought the aging animal back — out of Iowa — for just $2,500 “to make a few more calves from her,” he said.

He highlighted her story when talking generally about show-ring success through the years. “Some of my show winners in the heifer classes are from old cows that were favourites on the farm here,” explained Velthuis, who runs the operation with his brother Paul.

Velthuis Farms’ biggest win at the recent Victoriaville, Quebec, show came with Kingsway Alligator A Tix — top winter yearling and Junior Champion overall. Seven of nine Velthuis animals placed at least in the top five of their categories. Among them was Velthuis Doorman Fanta, the fourth place winter yearling. “She’ll calve out early next year, and she’s got a lot of upside coming,” Velthuis observed.

Steven Velthuis conceded that Holstein breeding and showing is an expensive endeavour, but one that’s been a lot of fun since he and his brother got into that side of the industry about 20 years ago. Still, a top-placing show animal can yield $100,000 in embryo sales, said Velthuis, who runs his own on-farm embryo-flushing and IVF lab.