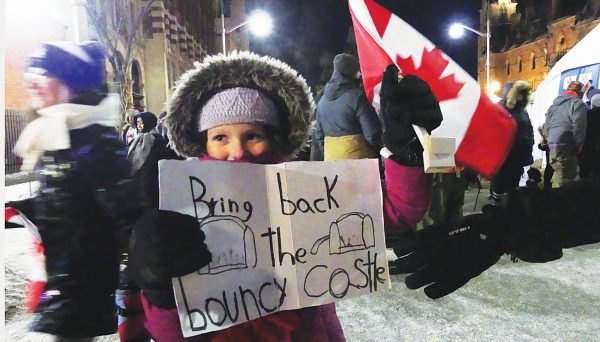 After the short-lived Emergencies Act came to the rescue police used force – sometimes tear gas, sticks to the face, the end of a rifle and horses – to move the truckers out of Ottawa and set up ongoing police checkpoints on the downtown sidewalks and streets.

Was the Emergencies Act necessary? The Act can only be used if there is a threat to the security of the country. It must be a national emergency with critical threat to life and health of the citizens. Yet, families flocked to the protest epicenter on weekends and the vast majority of Ottawa residents could live their lives not knowing that there had been a trucker protest downtown.

No matter, the Liberal Party and NDP voted together to suspend basic human rights on Feb. 21, two days after the Freedom Convoy left town. The Liberal Party argued that the suspension of rights (including the right to your own bank account and vehicle insurance) as far away as the Yukon was necessary because the truckers might be back.

What was so threatening about these truckers? There was no threat when hundreds of them parked downtown. In fact, it was easier to find parking. As a reporter, I was downtown every day talking with farmers and truckers to survey the situation for myself. Knowing how big media agencies spin stories to fit agendas, I wanted to know what was really happening on the ground. And it was not what you see on the CBC. This was an incredibly peaceful movement. For once, Canadians have something to teach Americans. Canadians can peacefully protest, and do it legally, even when intimidated by police marching against them in riot gear.

The protestors allowed for free movement of vehicles by opening one lane on Wellington Street in front of Parliament Hill. It was easier in these three weeks for an ambulance to drive down Wellington Street during the day than at any other time in recent memory. Horns did not blare all night because even truckers have to sleep. The protestors shoveled the snow from the streets and cleaned up garbage. Supporters opened tented kitchens with barbecues and offered everyone, including the homeless, free meals. They organized a children’s area with bouncy castles, freshly-popped popcorn and candy floss. They played hockey in the street. There was a hot tub and every weekend there were music parties at six different intersections. It attracted thousands of people because the truckers offered them their first big party in two years. They held church services on Sundays. I often saw groups of men huddled in prayer. By all of the posted online cellphone video, the movement for freedom was supported by hundreds of thousands, if not millions of people.

The truckers even planned their parking spots with the help of Ottawa police to allow for necessary travel east and west through the downtown core. So, other than parking infractions, it was not even clear that there was anything illegal about it. According to veteran protestor and crop farmer John Vanderspank: “It becomes illegal when it embarrasses the government.”

The protestors had glowing words of kindness for the police. “They’re on our side,” said farmer Lloyd Crowe, of Picton. Grown men hugged. “Love you brother,” was a common phrase. “God bless you” was another. After the first week of anger directed at the prime minister, the number of f*** Trudeau flags diminished.

When asked about the emergency when it was first announced by the city, many truckers and farmers laughed. “Everybody is still in love with everybody down here,” said a Quebec trucker who brought his entire family. “A guy dropped off a big box of donuts this morning from a church.”

Walk down there any night with your kids and you were offered hotdogs and hot chocolate, a fire by which to warm yourself and good music. It was wonderful to see people smiling again. Said a man who drove 10 hours to get there: “I haven’t felt this good in years.”

Protestors were courteous and friendly. They did not break anything. No crimes were committed. There were no fights, not drunken altercations, no over turned cars. So, the entire three weeks wasn’t even close to being as worrisome as Canadian hockey fans after one Stanley Cup game.

So what was the emergency?

The emergency, surprise, surprise, was a fabrication. Since most people learn about the world from big media networks, politicians used them to paint hardworking people, oppressed for two years, as the racist fringe of society in a lawless illegal occupation, uprising and insurrection. It was politics at its ugliest.

Even the Canadian Civil Liberties Association was shocked. In a statement the civil liberties group said: “The federal government has not met the threshold necessary to invoke the Emergencies Act. This law creates a high and clear standard for good reason: the Act allows government to bypass ordinary democratic processes.”

Interestingly, when terrorist group Hamas launched 3,500 missiles into Israel last year, Israel did not declare a state of emergency and Trudeau issued a statement calling for Israeli “restraint.” During eight months of Black Lives Matter rioting in the U.S. Businesses were burned to the ground and at least 30 people killed. Trudeau bended a knee in deference to BLM. No emergency there.
But damn those bouncy castles.