OPINION: Sometimes a dog can be a bird’s best friend

Our day-old turkey poults arrived in the middle of June, another step to self sufficiency (aka spending as little at the grocery store as possible).

We haven’t raised any chicks or poults for many years and the 10 foot by 10 foot log building we had built for them was now in the way. A cement pad was poured and the building lifted off the slabs it was on and moved to its new location. A large outside run will be made so they can graze and eat bugs as well as prepared food.

We quit raising birds as we found that they grew too fast, got too big and their hearts and legs couldn’t keep up. Now, with a new breed to try (White Classic) which mature at about 17 lb., plus allowing them to graze, we have high hopes.

Moving them into the turkey house set up with a cardboard ring for a week, with feeders, waterers and a heat lamp, we discovered we had an eager helper.

Our five-year-old Australian Shepherd dog, Mike, has never seen chicks of any sort and he was intrigued. Actually in the building, he was sniffing them, gently pushing them around and even licking them! This Aussie is one that several regular visitors to the farm are petrified of, some even calling ahead and asking  us to “put that dog away” before they arrive. Yes he is big, a merle coated dog with one blue eye and one brown and very loud. With our four legged door bell, no one arrives unannounced but if they looked at his rear end they would see his whole backside wagging from side to side! 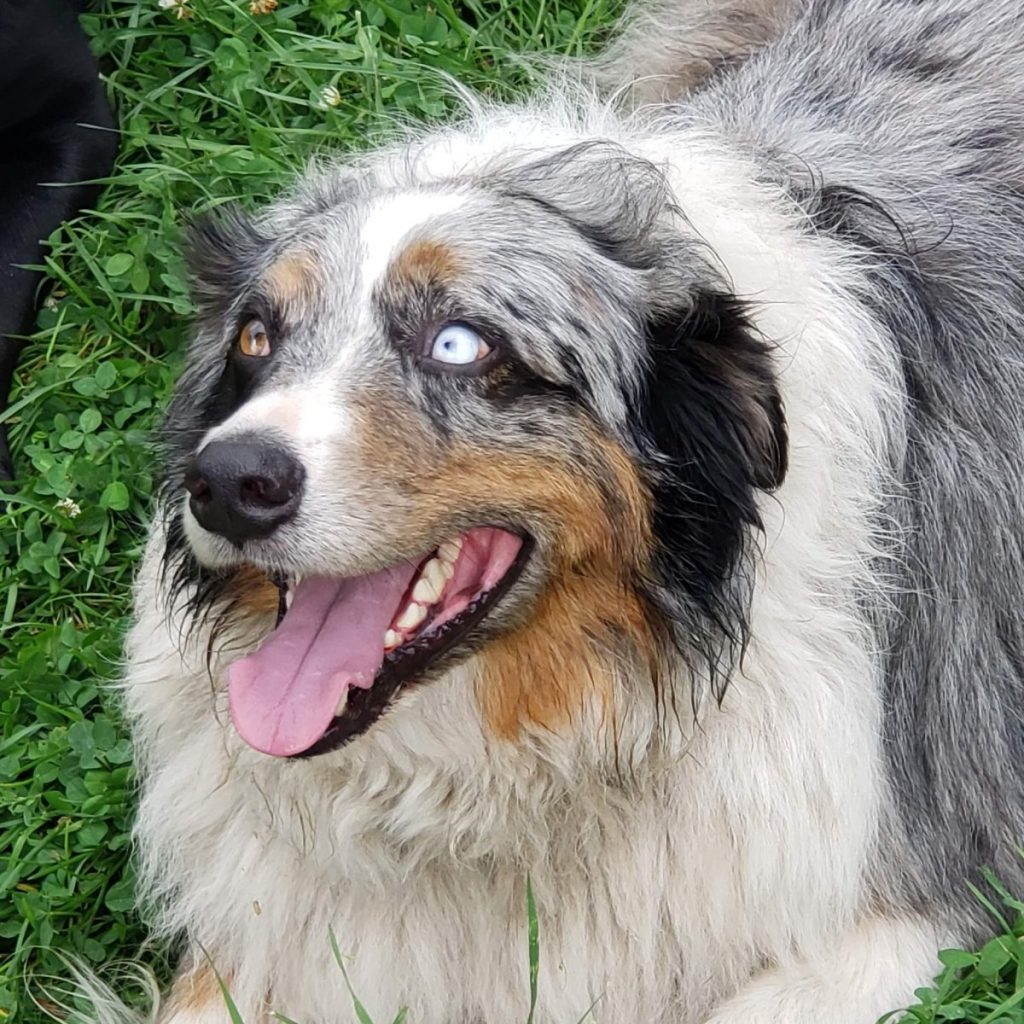 Mike, a five-year-old Australian Shepherd, seems happy with the addition of turkey poults to the farm.

Now, when I come out of the house and head to the backyard, he trots along in front of me, turning to watch what I am doing. Once he has determined that I am not going to the vegetable garden or the greenhouse, he is off like a shot and waiting at the turkey house for me. Given the opportunity, I believe he would spend all day watching the poults.

This reminded us of our first Border Collie, Joy, a tricolour with a distinct love of little birds. At that time we used to brood meat birds in a big steel tank with a welded mesh lid to keep weasels and other critters out. Joy would spend hours on her hind legs, front legs resting on the lid, happily watching the chicks. We would suddenly realize that we hadn’t seen her for a couple of hours and check the brooder where she would be found. The look on her face when she turned to greet you said, “everyone of them is okay!”

Her attraction and devotion to baby birds had one unfortunate side. If she was in a field and discovered a Killdeer nest she would gently pick up a baby and find one of us with it, clearly saying, “One escaped and I found it, now you have to put it back.” Someone would spend the time to locate a Killdeer nest (hopefully, the right one), and return the chick. Another day or two and she would be back with another baby.

Joy protected and herded ducklings too. We kept Muscovy ducks loose around the manure lagoon so they would raise ducklings which feast on the fly eggs and larva. It worked like a dream – chemical free fly control – until they discovered the concrete pad at the milk house and used that as a sunning station. It didn’t take long before we received a call to get rid of the ducks!

One female hatched a large clutch in the flower bed in the middle of our circular lane. During the day she would walk around the yard with them, Joy following behind herding up any stragglers. Early one morning a fox came into the yard and ate every last duckling. Joy got even! She led the men to where the fox had a lair in the stone fence and, although she hated guns, stood by while the men shot it.

Joy’s revenge was sweet, you could tell as she trotted back to the yard.