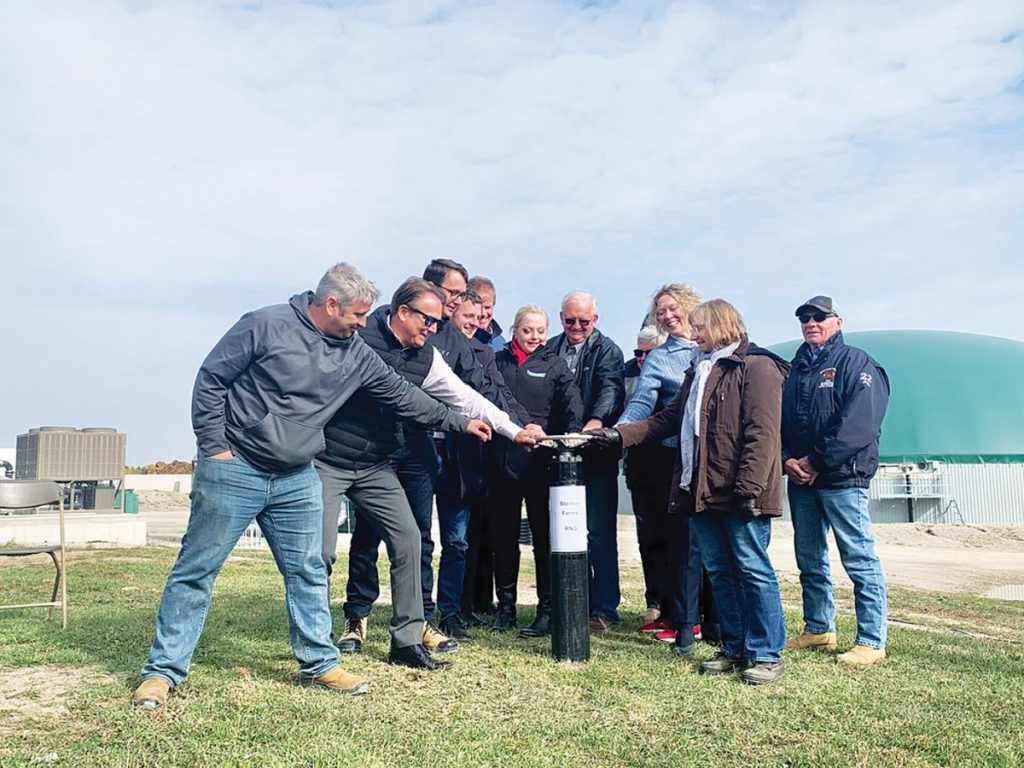 Stanton Farms’ biodigester system officially went online last month as family members and others turn on the valve in front of the biodigester.

They capture cattle gas from manure and produce enough methane to power 1,300 homes — and they sell it all to gas company

ILDERTON — A London-area dairy farm is first in the province to sell methane — produced from cow manure and other waste — directly into the natural gas grid, and enough to supply 1,300 homes.

“As we like to say, we’re helping to power up our community, not just when the wind blows or when the sun shines,” Garry Fortune, a Stanton Farms management employee, told Farmers Forum.

The new, $12-million biodigester unit at the farm has been pumping some amount of methane — also known as renewable natural gas — into Enbridge’s nearby natural-gas line since last fall, according to the owners. But the system only officially went fully online last month.

The farm supplies 3-million cubic meters of methane annually at a paid rate of between $28 and $30 per gigajoule, according to farm owner Laurie Stanton. A gigajoule is about 25.5 cubic meters.

The 3,000-head herd includes 1,000 milking cows. The animals’ manure is mixed at a legislated minimum 50-50 ratio with organic waste from local food- and meat-processing plants, as well as food-service operators, to produce the gas in the one-million-gallon biodigester at the heart of the system.

Biodigesters — specialized manure lagoons that brew and collect methane from decomposing waste — are nothing new in farm country. More than a dozen farm-based units dot the Ontario landscape, according to the Canadian Biogas Association.

For the farms that have them, biodigesters are more commonly used to fuel generators for the electricity grid. But that option disappeared for new projects when the Ford government ended hydro-buying programs in 2018.

That reality led Laurie Stanton to look at selling methane directly to Enbridge and built the farm’s third biodigester.

Stanton said the farm’s very first biodigester — which he likened to a Ford model T  — was abandoned as a failure at considerable expense. The second, however, has been producing almost one megawatt of electricity, under contract with Ontario’s power grid operator, for the last five years.

After that number two unit went into service, the farm still had extra methane, which had to be regularly flared off. “We wanted to get to a spot where that flare wasn’t running because it bothered me to see that gas being burned for no good reason,” he said.

It turned out that Enbridge had recently installed a gas main near the farm entrance, a potential point of access into their system.

“It took quite a bit of negotiating. The renewable people at Enbridge were quite supportive, but I’m not convinced everyone was on side,” he chuckled.

The farm paid for the entire project, though Stanton says they have applied to the federal government for some funding. In any case, payback for the project should be “less than 10 years,” he said.

Making saleable methane from a biodigester is a much more complicated affair than generating electricity. The raw methane must go through expensive equipment to clean it up to the same standard as regular natural gas. Stanton said the farm has partnered with Faromor CNG to handle that aspect of the operation. “I’m not saying you couldn’t do it yourself, but it would be a very steep learning curve,” he said.

The farm’s contract for the methane is with Fortis B.C., he said. That company sells the gas to its customers and is able to claim the carbon credits, based on the conventional gas that is displaced by the output from Stanton Farms.

The actual molecules of methane from the farm “probably don’t make it past Ilderton,” he added.

The same would be true of the electricity produced on the farm 24/7, making Ilderton “one of the most renewable-energy-supplied communities in the country,” Garry Fortune said.

Biodigestion “dramatically reduces” the odour from manure, Laurie Stanton pointed out. “That was really what started it. Our goal was to be a good neighbour and be seen as a positive rather than a negative.”

The farm also employs other sustainable practices such as using water 8 to 10 times before sending it into the lagoon as waste. After the manure is digested, the fibre is removed for reuse as bedding in the main milking barn.

The project is not related to the GET Corp. proposal to establish 310 biodigesters to process most of the manure from Canada’s dairy farms. Stanton said he was aware of that proposal, which has been pitched as a way of getting the sector down to “net zero” carbon output by 2050. He believes the initiative could work, even if it does rely on using manure exclusively without added waste in the digester mix.

The Stanton project alone will eliminate over 11,000 tonnes per year of greenhouse gas emissions, equivalent to over 2,200 passenger vehicles, according to Enbridge. Methane is said to be 29 times more potent than carbon dioxide as a greenhouse gas.

“Biogas has been around for a long, long time,” Gallant also observed, though he noted that relatively few Ontario farms would have access to a gas line.

Enbridge says it’s open for business, and that farmers looking to sell methane are encouraged to visit enbridgegas.com/rng. That web page includes a calculator to see if producing agri-RNG is economically viable on a particular farm.