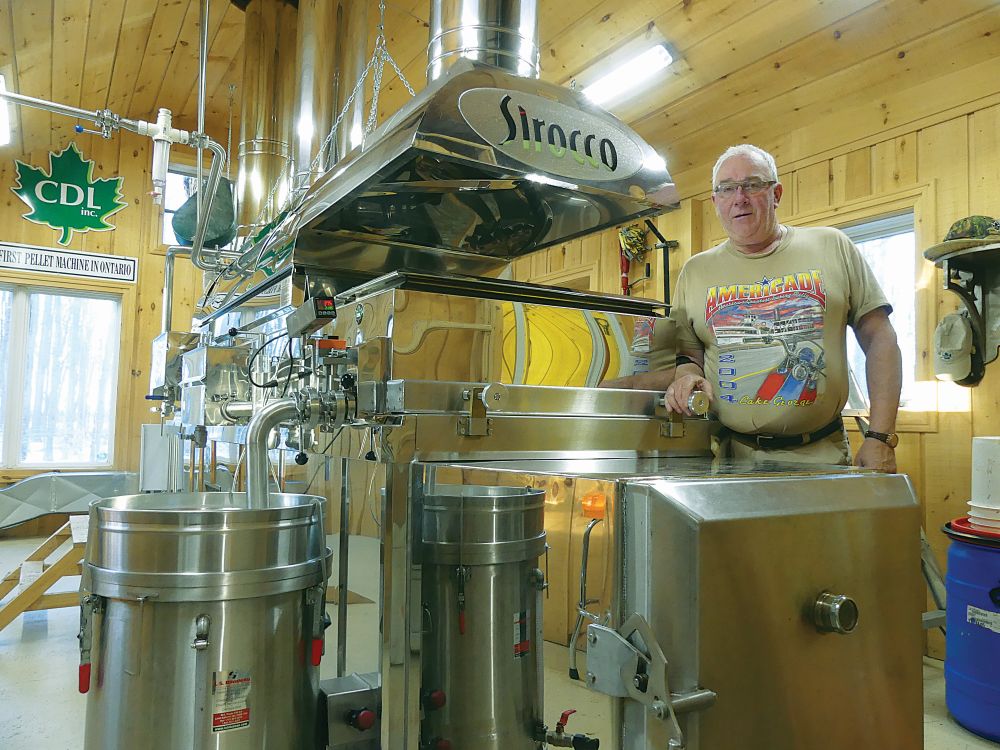 Frank Heerkens at On the Bend Sugar Shack in South Dundas Township in 2017.

CHESTERVILLE — Ontario has the potential to be the largest maple syrup producing region on the planet, surpassing even the global powerhouse Quebec, source of more than 70 per cent of the world’s maple syrup. Ontario, however, has recently dipped to third place nationally in the output of the sweet elixir.

New Brunswick’s 150 sugarbushes are now understood to produce more maple syrup than the 600-plus operators in Ontario, says Ontario Maple Syrup Producers Association president Frank Heerkens. “We need to adjust our focus,” says Heerkens, who is calling for more growth and a revamp of the industry to catch up with the competition. “We need to double the production just to meet the local demand.”

The producers’ association, intends to commission an economic study leading into the organization’s new five-year strategic plan beyond 2023. Some estimates place Ontario’s average annual syrup output as low as 1.6 million litres, shy of the consistent 2 million litres Heerkens envisions as necessary to entice more bottling plants to the province.

“If you produce the syrup, the bottling plants … will come,” he said. “If they know they can get syrup reliably without having to worry from year to year, they would build and export all over the world.” Currently, with smaller-sized producers predominating in Ontario, the supply to wholesale buyers tends to be the first thing cut if the weather produces a less than ideal season, as is the case in 2021.

He explains that Ontario operators are often satisfied to sell out via farmgate sales rather than worry about the wholesale market. The producers’ association also hopes to nail down the number of taps needed to break even at a typical sugarbush.

The figure was 1,800 a decade ago, he reports, suggesting an economically viable business now requires 3,000 taps, a rise compelled by stagnant prices for the final product. Meanwhile, the average number of taps at an Ontario sugarbush still stands at just 570, about one-tenth of the size of the average operation in Quebec.

It’s aggressive Quebec operators — on average 15 years younger than their Ontario counterparts — who have ex- panded into New Brunswick in recent years to increase pro- duction and push that province ahead of Ontario, according to Heerkens, though he’s hopeful Ontario can re-take its traditional number two spot by encouraging younger farmers into the enterprise.

But why not number one? Ontario “has more accessible maple trees” than Quebec, he exclaims. However, Quebec has a tradition of making maple trees available for lease on Crown land. The producers’ group will ask Ontario to make it easier to lease land here.

EASTERN ONTARIO — After back-to-back banner production seasons in 2019 and 2020, this year’s maple syrup production was set to fall well short of the average.

Ontario Maple Syrup Producers Association President Frank Heerkens said he was anticipating about half the output of an average year at On the Bend Sugar Shack at Chesterville as temperatures abruptly rose to balmy levels during the second last week of March.

Nearby Grampie’s Sugar Shack proprietor Oswald Linton confirmed the bad news when he spoke to Farmers Forum on March 31, estimating he was on track for between 50 and 75 per cent of an average season. “It’s not terrible,” he added. “We’re boiling right now, and we might get one more day,” observed Linton, noting a forecast drop in temperature.

Both Heerkens and Linton employ vacuum systems to draw sap from their trees.

But the traditional bucket method is still used at Stanley’s Old Maple Lane Farm in Edwards, where owner Earl Stanley was expecting just 30 percent of the average syrup yield. He attributed some of that lost volume to installing fewer taps in anticipation of a shorter season after taking notice of the minimal ground frost this past winter.

“And we’re still open,” Stanley pointed out, highlighting the “success” his pancake house has at least had with a new deep-fried pancake introduced this season to welcome visitors back to the eatery.