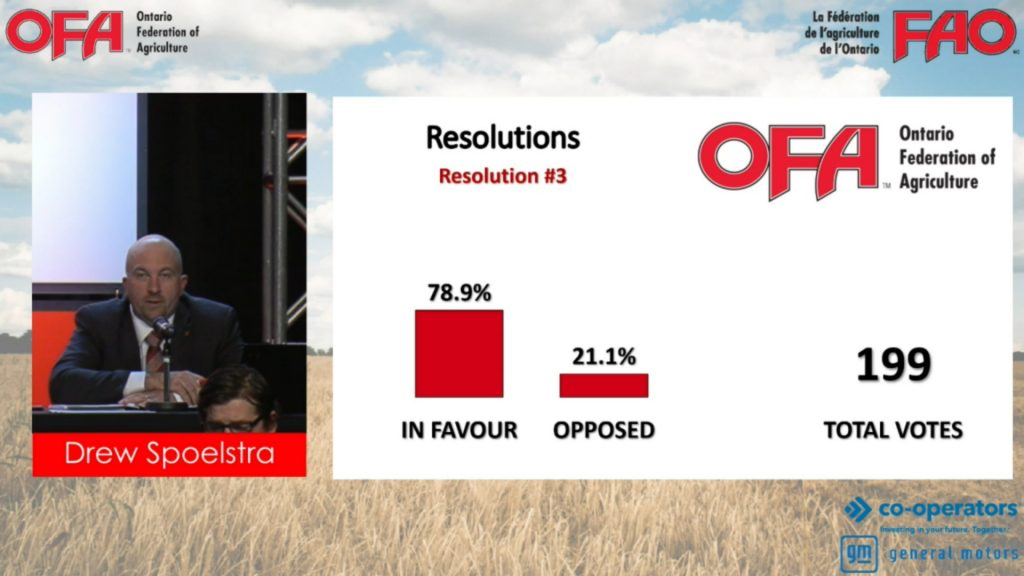 In this screenshot of the virtual 2021 AGM, OFA Vice President Drew Spoelstra presides over the vote on the resolution pertaining to the Co-operators Insurance company.

The Ontario Federation of Agriculture was a founding member of The Cooperators and remains its largest founding shareholder, as pointedly noted in the Leeds County resolution that was supported by nearly 79% of the 199 members who voted at the OFA’s Nov. 22 annual general meeting.

Leeds Federation of Agriculture secretary-treasurer Eleanor Renaud informed the virtual session that the matter came up when her neighbour, a long-time Co-operators customer and “meticulous” dairy farmer, was suddenly denied coverage by the firm.

The local rep and brokerage office “thought everything was fine” only to have “head office” deny coverage, explained Renaud, who moved the resolution. “He was left in the lurch … at the 11th hour, and he really had to get insurance…. Yes, the barn is a little older, but it is in great shape,” she said. “We do believe Cooperators needs to be called out on this.”

In a statement to Farmers Forum, the Co-operators said it is “currently working with the Ontario Federation of Agriculture to bring clarity to this particular situation. It is not accurate to state we no longer insure older daily barns. We make all coverage decisions based on a variety of multiple risk factors that are specific to the individual client.”