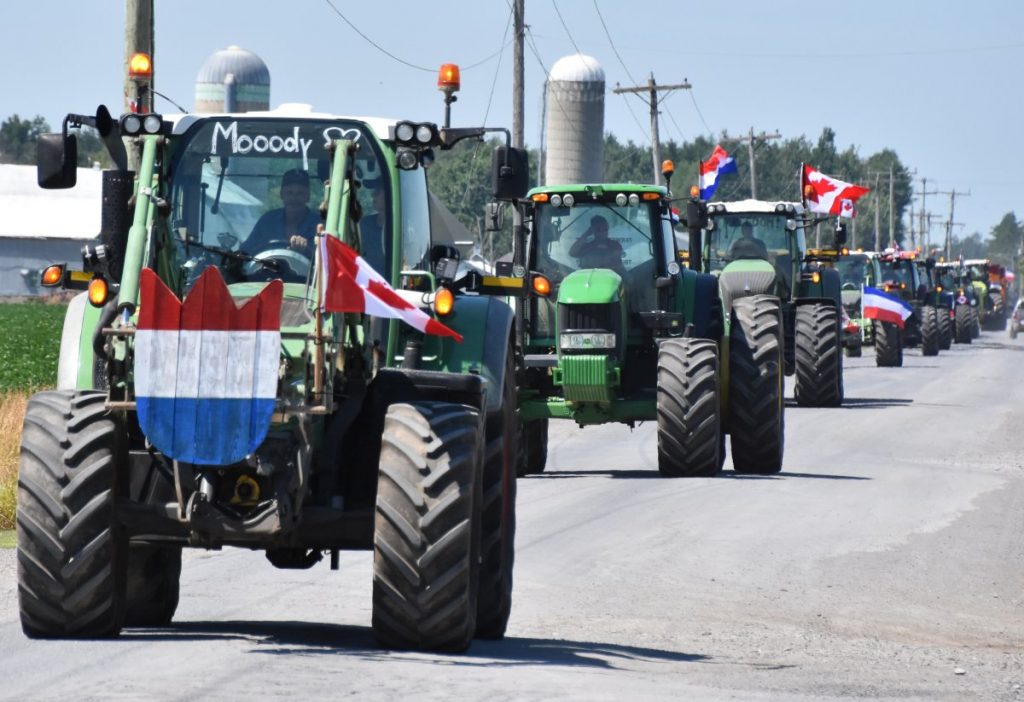 Local farmers fear Canada is next for crippling rules

ONTARIO — Ontario farmers with links to Holland are watching the agricultural unrest in their ancestral homeland with a mixture of sympathy and concern — while thanking their lucky stars to be operating in Canada. Dutch farmers have rolled out tractorcades and tied up the streets of the Netherlands this summer in furious reaction to proposed environmental policies curtailing use of nitrogen fertilizer and cutting herd sizes.

After years of escalating and expensive regulatory requirements, Dutch farmers were like “a rat pushed into a corner” when the Dutch government proposed harsh new greenhouse gas cuts on the ag sector, says Marcel Smellink, an Iroquois-based farm realtor and cash-cropper who speaks daily with farmers in Holland. “This is the straw that broke the camel’s back.”

Weeks of protests that shut down highways drew as many as 40,000 Dutch farmers were sparked when the Dutch government released a plan June 10 that would cut nitrogen fertilizer use 50 per cent by 2030 and almost completely eliminate its use in some cases. Nitrogen is applied to land as manure or as chemical fertilizer, releasing nitrous oxide, which is considered a greenhouse gas and worse than carbon dioxide.

Smellink says some farmers say they will be forced to shut down operations as the expected new rules will drastically reduce yields and compel substantial herd-size reductions.

“Their whole livelihood is threatened and some farms have been in the family for centuries,” he says.

He says he spoke last month with a Dutch farmer eager to immigrate to Canada who regularly participates in tractor blockades in the Gelderland province. The farmers say that the Netherlands must change direction or change governments, Smellink says.

The “craziest thing” about the Dutch nitrogen plan, he adds, is that it’s not even mandated by the European Union. Neighbouring Germany isn’t pursuing the same policy. The Netherlands stands alone.

Smellink also says he communicates regularly with a few Dutch nephews who rolled tractors in protest and he urged them to “keep pushing.”

In disgust, some dairy farmers emptied their bulk tanks into their manure pits. “It would help if they all did it,” adds Smellink. “You’ve got to stand en masse to do this, or it will not be successful.”

Smellink suggests that “what happens in Europe, we will see here in 10 or 20 years.”  Already, Canada’s federal agriculture department has been pushing a proposed initiative to reduce nitrogen use by 30 per cent by 2030.

He suggests no Canadian farmer would put up with even the existing restrictions in Holland. “They would all go nuts,” Smellink declares. “But if you impose it slowly, you get used to it, and you have no choice.”

The Netherlands is the largest food exporter after the United States and home to more dairy cows than in all of Canada.

“I do feel for my farmer buddies there,” Chesterville cash-cropper Willyan DeJong says. “It’s the steady drip.”

The latest policy escalation “was the drop that made the pail run over” for the Dutch protesters, he says.  “I think it’s absolute desperation” for the protesting Dutch farmers.

It can cost hundreds of thousands of dollars to comply with the evolving regulatory burden in Holland, especially around manure storage, only to see the government demand further changes, says DeJong, who immigrated to Canada in 1989 to establish a dairy farm in Sturgeon Falls, near North Bay.

“I know the regulations have come on pretty strong in Canada in the last 10 years,” he adds. “They’ve been dealing with regulations that are never ending in Holland, but neither will they end here (in Canada), either.”

Kornelis Schaafsma recently sold his dairy farm in Friesland, the northern province in the Netherlands, and is looking to buy a farm in Ontario. The regulatory burden was a key reason for his leaving Holland in early May, and that was before the latest development.

Some of his friends in the Netherlands have been told they will have to get rid of 12% of their dairy animals. He knows of two other operations looking at a 47% herd cut. “So the situation is really bad,” says Schaafsma, currently staying in the Tillsonburg area in Western Ontario.

One of the “stupidest” Dutch policies was the meager amount of manure the law allowed him to spread on his fields, he says, “but you were still allowed to use fertilizer.” Now, the government wants to quash fertilizer use as well. “Hopefully, it doesn’t get worse on this side of the ocean, but sometimes I have concerns about that.”

Schaafsma says the mostly urban Dutch population — 17 million in an area smaller than Eastern Ontario — has been growing less hospitable to the small farming minority and “the mind set of the politicians doesn’t really help.” He suggests the Dutch government covets the farmland for its own purposes, especially housing. Farmers may be forced to sell, and possibly at cheaper prices as non-viable farms, he says.

“It’s really about taking land for building houses and stuff, and pushing the farmers out,” agrees Sjaak Kappers, a Listowel dairy farmer who immigrated in 1998. “They’ve been burdening them with all kinds of regulations.  And now … you have to get rid of the farmers, I guess. It’s the same idea of what’s starting to happen here now.”

South Stormont dairy farmer Thomas Booijink says his cousin in Holland was involved in the protests, and that farm is flying a Dutch flag upside down. Their local government and province were also pushing back against the Dutch government, Booijink says.

It seems “messed up” for the Dutch government to be taking this direction at a time of global food insecurity, he adds.

Hammond dairy farmer and Dairy Farmers of Ontario board member Bart Rijke maintains contact with a few Dutch farmers, and says “they’re not happy, and I can see their point.”

Rijke says he feels for them after the way their government has sprung the proposed change on them while paying less attention to the emissions of “airlines and industry and other stuff like that.”

However, Rijke says agriculture in Holland is “a very different situation” and “way more intensive” than the rest of Europe — let alone Ontario or Canada.

Rijke says he’s “very glad” to have left the Netherlands 40 years ago. “If you see what’s going on there now, I’m really glad we’re here.”

Below: Watch Farmers Forum footage of Eastern Ontario farmers rolling a tractorcade out of Casselman, July 23, in solidarity with their Dutch counterparts.