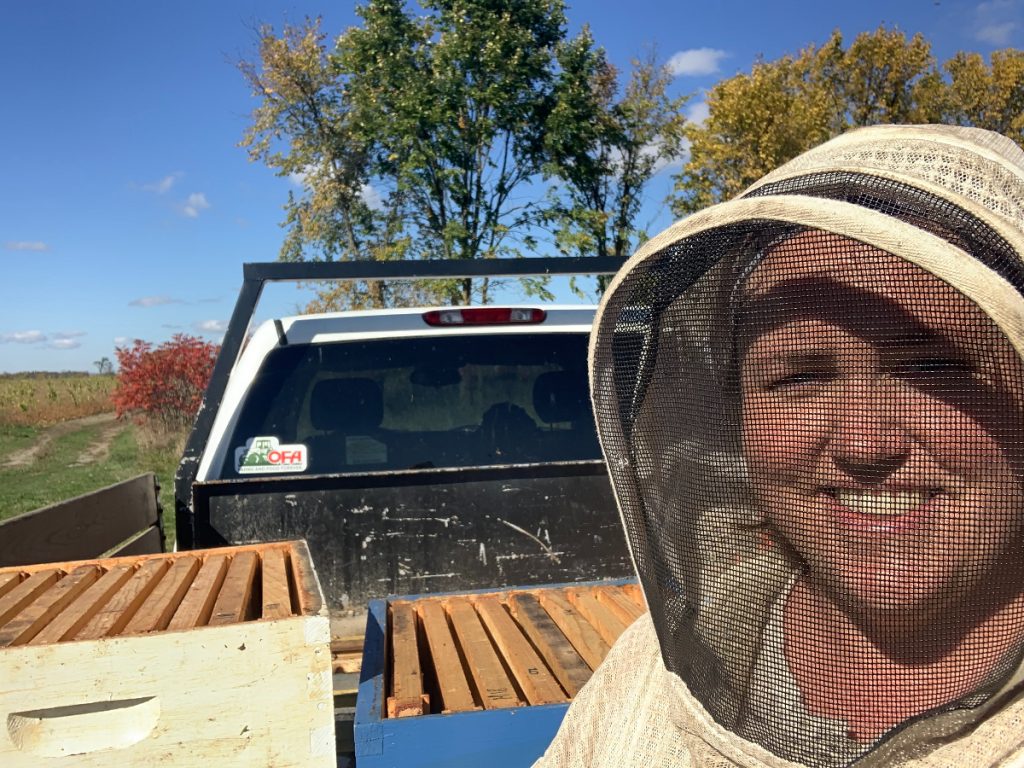 Jennifer Doelman lost 20 of her 25 beehives over the winter — some likely due to colony collapse disorder.

ONTARIO — When beekeepers put their hives away for the winter, they always expect some losses, but not this many.

Renfrew County crop farmer Jennifer Doelman lost 20 of her 25 beehives over the winter. And she’s not the only one — similar losses have been reported across Ontario and in other provinces like Alberta and Manitoba.

“I know quite a few people who are regular beekeepers that have lost everything or they’re only down to a few hives,” Doelman said. In a quarter of the hives Doelman lost, the clusters weren’t large enough to survive the winter and the bees froze. However, some of Doelman’s strongest hives were found empty when opened, which is likely tied to colony collapse disorder — a sign of excessive stress.

One of her hives showed signs of dysentery, likely connected to feed issues, but bees don’t necessarily die from this, and the other hives did not have this issue, she said.

Doelman treated some of her hives with an organic pesticide, but this resulted in some late season queen losses. These stresses made the hives weaker heading into the winter.

“I’m going to attribute it mostly to mite load. I know my mite counts were very high in the fall when I did my fall treatments. It’s quite likely the mites vectored in viruses. When you treat for the mites, you can get rid of the mites, but you can’t get rid of the viruses they’ve already carried to your hives,” Doelman explained.

The only way to know for sure is to have the hives sent for mRNA testing. Doelman has already begun autopsies on some of her hives and hopes to have the provincial bee inspector take some samples soon. Of Doelman’s five remaining hives, “one is weak, two are average, and two are incredibly strong.”

She has treated the bees and started feeding, hoping the genetics that survived will be more resilient. She will still be selling honey this year, but not bees. “I really want to make sure that if I can, I can keep most of these girls. My goal is if I can have eight healthy hives for the fall, I’ll be satisfied. I’m certainly not paying many bills from my bees this year but if all goes well, we can rebound for success again next year,” Doelman said, highlighting the importance of farmers spreading out risk with multiple revenue streams.

There are about 2,900 beekeepers in Ontario.

Some beekeepers have claimed that all these bee losses are caused by pesticides and GMOs, but Doelman warns against such generalizations, saying there is no evidence to show that GMOs are a concern and pesticides are used in hives by the beekeepers themselves to manage mites. “Honeybee management is complex and this is a complex situation. It was a lot of things that worked against us,” Doelman said.

“The losses being reported in Ontario are higher than in years prior,” said Singhampton commercial beekeeper Hugh Simpson. “Last year was a very strong bee season, and when bees are doing well, so are the varroa mites. I am sure that lots of beekeepers just did not keep up with varroa management.”

Guy Anderson, a beekeeper based in Kincardine, lost over 800 of his 1,200 beehives over the winter. And he’s not the only one — similar losses have been reported across Ontario and in Alberta and Manitoba. “Everyone that I know has been doing everything right and putting great effort into it, so it’s been a bit of a surprise,” said Anderson.

Anderson’s business is one of the top 10 largest beekeeping operations in Ontario, selling a variety of honey products in both retail and wholesale, alongside many honeycomb and pollination contracts across Canada.

Now at a 65 per cent loss, Anderson says their operation will be heavily reduced in all fields. “A sustainable loss is in the 25 to 30 per cent range,” said Simpson. “Once it gets beyond 30 and approaches 40 and beyond, then it requires a lot more resources to rebuild.”

After sending 500 of his hives to Quebec for wild blueberry pollination at the end of last year, Anderson noticed “they weren’t as strong as they normally are” and were not producing any honey. “We knew something was a little bit wrong,” he said. Anderson medicated, fed, and wrapped his hives for the winter. When he checked on them in early February, “there was a lot dead.”

He used three different products to treat the bees. “We just don’t know if it was a horrendous blow up of mites, or the treatment wasn’t effective, or just the weather,” said Anderson. He used both oxalic acid and Apivar strips to treat for mites. The mites vectored in vi-ruses that likely killed many of the bees, and the cold winter temperatures and early snowfall didn’t help, said Anderson.

Pesticides sprayed on local fields could have also gotten into the hives and contaminated the colonies, he said. “It might’ve been a little bit of that here and there, who knows. We’ve been trying to think of all the possibilities and there’s no definite answer,” said Anderson.

He is currently awaiting the results of tests conducted on his hives. “I feel kind of lucky because I’ve got 400 hives left. There are people who have 60 hives who lost 59 of them, that type of thing. At least I have some to start building back off of,” he said. “If we really work at it hard, we should hopefully have 800. I’ve got queens coming from California and Chile in a few weeks.”

Of his remaining hives, most are weak, he says. And they have been building up very slowly this spring due to the “lousy weather.” Not many are large enough to split yet. “It’s going to take a while to build it all back,” said Anderson.