EUROPE: Only 50 farmers protest end to quota system for milk 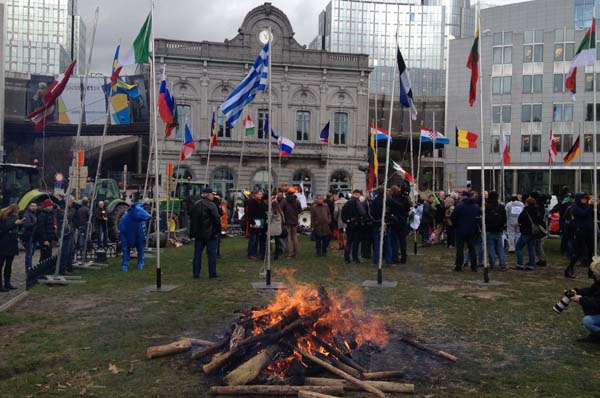 In the European Union, milk quotas were introduced to address oversupply of dairy products in 1984. It was hoped at the time that quota would eliminate the then infamous milk lakes and “butter mountains.” Under the new regime, quota was fixed for each producer or purchaser, and a levy was implemented — called the “superlevy” — which was payable by those who exceeded that quota. Quota only applied to cow’s milk, and did not cover milk produced by sheep or goats.

In its day, quota served its purposed. Gradually, it helped to cap the expansion of production in the EU. However, over time, policy led to a more market-oriented sector. The decision to pull the plug in 2015 was determined back in 2003.

The end of quota was no surprise, says Welsh dairy farmer Mansel Raymond. “We’ve had years to prepare.”

Raymond, like many U.K. farmers, is happy about the end of quota. Like many northern European dairy farmers, his cost of production is quite low. Although he admits that the prospect of operating in a totally free market can be frightening to some, he says that Europe is well placed to compete in the world market.

“There will be casualties; there always is,” he says. “But we can compete. The dynamics are totally different now.”

Raymond isn’t the only farmer who’s happy with the end of quota. Johan Vankelecom, a dairy farmer from Tienen, Belgium, says quota’s end provides his family with an opportunity to expand. The Vankelecoms have plans to expand their herd from 585 head to 1,000 by the end of the year. The dairy family has been producing above quota for quite some time now. Last year alone, they produced 4.2 million litres of milk when they only had quota for 1.35 million litres.

Mere days before quota’s official end on April 1, 2015, Irish dairy farmer Michael Downey tweeted, “Last quota milk being collected here, thank God. Back to normality from now on.” His tweet makes sense. He works in a grass-based system, so his cost of production is much lower than some.

“It’s been very frustrating up until now with cows having to be dried off prematurely . . . and facing a superlevy fine on excess milk,” says Downey. “It is a layer of red tape that I won’t miss.”

German farmer Tobias Volkert also mentions his relief over the end of the superlevy. Quota, he says, wasn’t implemented to guarantee good prices for dairy farmers.

The main reason for ending the milk quota, according to Phil Hogan, European commissioner for agricultural and rural development, was that there had been a considerable increase in the consumption of dairy products in recent years, especially in the world market. Furthermore, demand is expected to increase. The quota regime, he says, was preventing them from responding to that growing demand.

Swiss farmers, who are not part of the EU, lost their quota system in 2009. At that time, says Swiss farmer Martin Haab, if you’d asked farmers if they wanted quota to end, 80 per cent would say yes.

“If you ask the dairy farmers now, I would say 80 per cent would like to go back to a quota system,” says Haab. “Not managed by government — that never worked so well — but managed by farmers and farmers’ associations.”

In the EU, steps were put in place to provide a “soft landing” in the form of a one per cent per year increase on the price of quota. The hope was that this would reduce the value of its purchase price. “But farmers never utilized the extra quota,” says Raymond. “Not in the U.K., anyway.”

Not everyone is happy. One Belgian farmer (who wished to remain anonymous) said he’s worried that production will skyrocket and lower prices, leaving him unable to cover production costs. “My son has given up on the idea of producing milk,” he said, noting they are switching to potatoes. “We have a great farm. It’s a shame for it to go to waste.”

The day before its official end, a small group of about 50 dairy producers represented by the European Milk Board (EMB) protested in front of European Parliament. They parked their tractors in the streets, blocked traffic, lowered and burned the flags of multinational companies which stand to gain from the end of quota.

“Dairy farmers have no reason to celebrate today,” EMB president Romuald Schaber told the unhappy crowd in German. “We know that the chances that we will get cost-covering prices in the market are even lower than before.”