Growers seem to be sticking with their current crop rotation, satisfied that acres occupied by corn or wheat will also generate a good return — if not quite that promised by soybeans.

Lambton County crop farmer Dale Maris said “there won’t be much switching between corn and soybeans” in his area, noting that the gross dollar amount for corn per acre is very good and that the value of rotation has been heavily promoted.

Maris farms on heavy clay and includes winter wheat in the plans. “Guys realize that they need wheat” and this year “the viability of the winter wheat crop is looking pretty good,” he said. 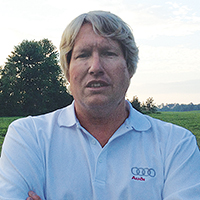 Steve Twynstra of Twilight Acre Farms Ltd. in Ailsa Craig offered that his operation will adhere to its current rotation, and he expects most producers he knows to do the same. “They’re going to be sticking with the plans they made last fall before the real run-up in prices,” said the Essex County Grain Farmers of Ontario director.

“A lot of the seed has been purchased, or booked at least, and the way the spring has gone here, it’s been very conducive to early corn planting, rotation is going to be leading the charge this year.” Corn prices are also strong, he noted, “and haven’t really retreated that much relative to soybeans.”

Twynstra expects that if more soybean acres are grown, it will come at the expense of alfalfa, cereals or possibly edible beans.

He agreed there may be a greater shift toward soybeans next spring as more cash-croppers are exposed to the latest and higher prices for fertilizer and other input costs. Soybeans have a reputation of not requiring as much fertilizer.

The decision to stick with beans was simple for Lambton County grower Robert Johnston, who’s been planting nothing but soybeans on his 250 acres for “many years.”

“I’ve once again taken the lazy farmer’s method, and I’m just no-tilling it all into beans,” quipped Johnston. “I’ve been breaking the rules for a long time growing beans after beans after beans. I can’t remember the last time I grew corn here.”

And with soybeans closing in on $20 per bushel, “I’m not going to change this year,” he added.

Market prognosticators said “we’ll never run out of beans … and now they’re looking into the bottom of an empty bag,” added Johnston, who admits to “getting away with” multiple bean plantings at his farm without the expected problems of rot or sudden die-off. “And I have not put any fertilizer down for many years.”