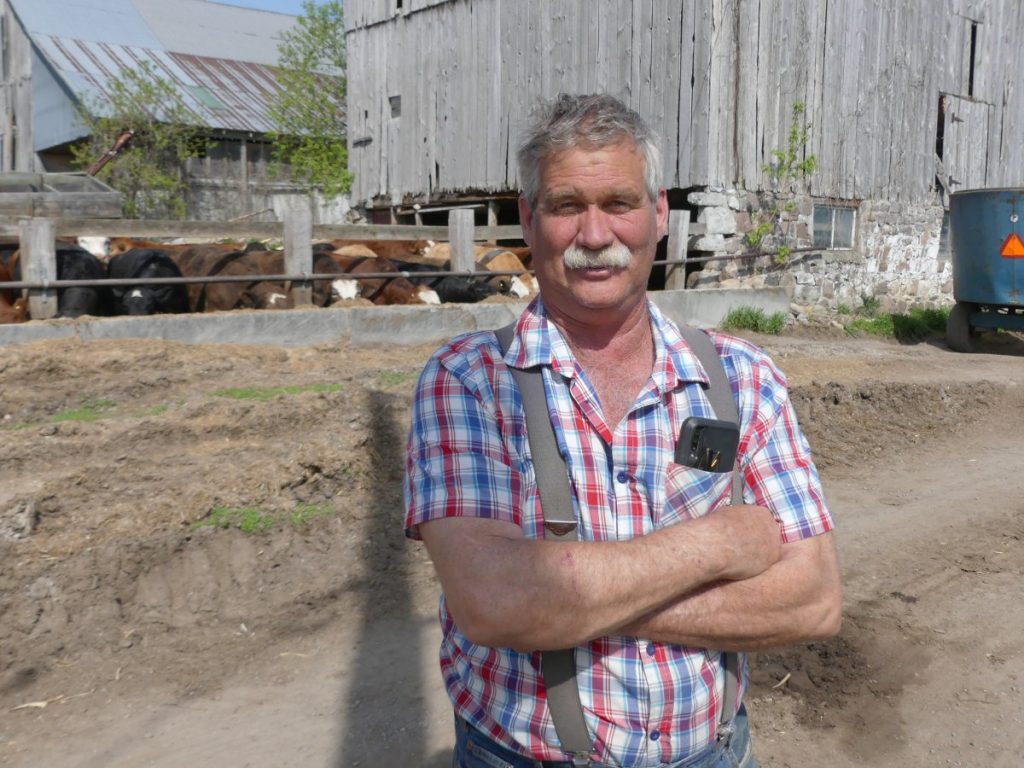 Beef farmer John Lunn believes to make it in beef, “you’ve got to be the best” in terms of the animal brought to the sale barn. (Nelson Zandbergen photo)

NORWOOD — John Lunn loves his cattle and loves farming. He says so and has dedicated his life to it.

The 61-year-old Norwood-area beef farmer brims with pride when talking about decades of supporting himself and his family solely from toiling on the farm where he grew up.

“There is no off-farm income here, so what we do is maybe not what everybody would like to see,” he says, sounding almost apologetic as a robust group of red and black bovines fill up on fresh feed dispensed in a trough beside a vintage barn with weathered wood siding and stone foundation. “But it’s what we can afford to sustain and stay in business,” he adds, smiling in the sunshine of a glorious spring day.

While Lunn sees his self-sufficient operation as increasingly rare but he is far from being alone. A surprising 38 % of Ontario “beef farms” (3,050 out of 7,986) reported no off-farm work in the 2021 Census of Agriculture, according to Statistics Canada.

The census also shows the number of Ontario beef farms rose from 6,786 in 2016 to 7,986 in 2021 — although these figures lump together feedlot operators with the cow-calf sector.

To make it in beef, “you’ve got to be the best” in terms of the animal brought to the sale barn, he says, adding his son has been learning about this strategy.

“He sees the cheque come in … He’s noticing that I only want the best going out of here, and that we then get rewarded.”

But there are fewer beef cattle in the province.  Statcan counted just over 230,000 beef animals in July 2021, substantially lower than any point in the previous decade and down from more than 280,000 in 2012.

Lunn has raised his children by himself since they were 7 and 8 years old. His son is now 15 and his daughter 17. They help on the farm. Sustaining the Lunns are a 150-head beef herd, a small flock of laying hens and 400 acres planted in commodity crops. All told, he owns about 800 acres, including pasture, and lives in the house where he grew up. His parents live in a newer home just across a grassy field from the original farmstead.

It’s a cow-calf farm, but with the occasional stocker bought in — “a cow-calf-to-finishing operation,” Lunn clarifies. The herd features Angus, Angus-Simmental crosses, “and we just went to a Hereford bull,” adds the farmer, who also serves as a Beef Farmers of Ontario advisory counsellor.

He recalls that his father ran the place as a mixed farm while holding down an off-farm job. Lunn himself was following that path by working for an auctioneer as a young man, before taking over the farm and plunging into full-time beef production.

“Whenever I went into all-beef, everybody told me I wouldn’t make it,” he recalls. “Everybody in town, even my parents, said you’ll never make it as a farmer, period, without working off the farm — or having quota.”

Then he chuckled: “I’m still here. The bank calls once in a while.”