Night-lighting to a bigger, better tomato 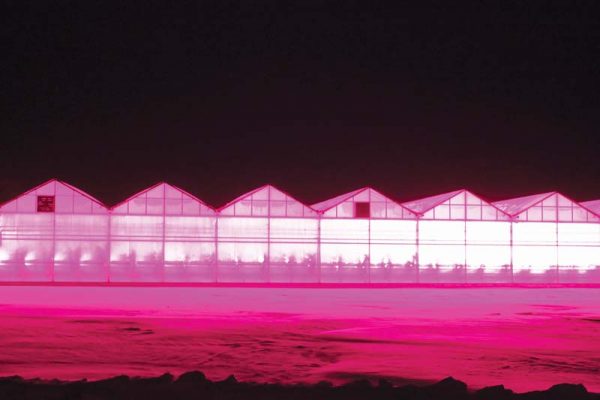 MANOTICK — When the LED lights at SunTech Greenhouses Ltd. flickered on for the first time last January, the bright fuchsia glow in the dead of night had neighbours reaching for the phone and fire trucks rolling in the driveway. Two days later, the fire chief was back, warning there were 13 trucks en route.

“Now he has our phone numbers, just in case,” says Carmen Perez, who runs the Manotick greenhouse, south of Ottawa, with her husband, Bob Mitchell.

No one had seen the LED night lights glow in the sky before. This is the first time an all-LED system has been tried on a commercial scale in Canada for winter production, Perez said. “There is a risk but as Bob always says, ‘In agriculture somebody has to lead.’”

The greenhouse has two strings of red and blue LED lights — shown in research to be best for tomato plant development and production — nestled among each row of plants on just shy of half of its four acres, which house multiple varieties of tomatoes, sweet and hot peppers, cucumbers, green beans, and eggplants.

It’s all about timing. While greenhouse plants can grow in the low sunlight of November, December, and January, they won’t produce. Under the purple glow, which ensures 16 hours of light per day, there will be tomatoes all winter long.

The goal is to move away from traditional peak production periods when producers watch the price go through the floor, says Perez.

Even though production with the LED lights started Jan. 16, a few months later than planned, the first yields saw beefsteak tomatoes 20 per cent larger on average and a 60 per cent increase in cucumbers.

But taste trumps quantity, says Perez, who says they’re still tweaking the temperature and nutrient recipe for the real test next winter. “It’s nice to have bigger volume, but if it has no taste, we’re not interested.”

While they’re pricier to buy upfront, LEDs use about 30 to 40 per cent of the energy of the more commonly used high-pressure sodium lamps, last three to five times longer with a 10-year lifespan, and are easier to dispose of. Emitting less heat, LEDs can be placed very close to the plants to use more light, allowing residual heat to reduce humidity, which may prevent diseases, says Perez.

The end game is to boost business enough that it’s a no-brainer for Mitchell’s son, who sought his fortunes in the Alberta oil industry, to come home, says Perez.

“For him, it was crazy to stay here. Bob’s goal is to make him crazy if he doesn’t take over the business.”