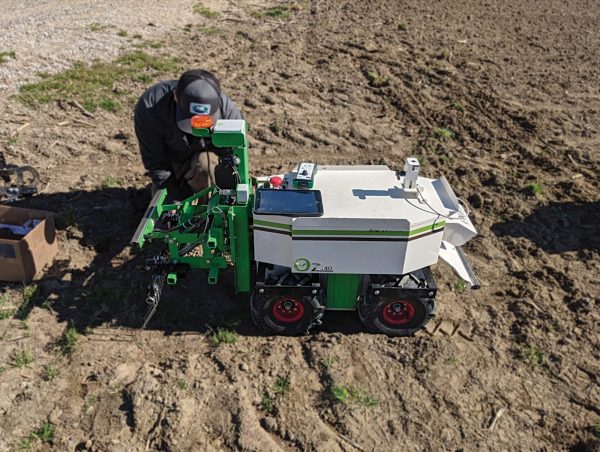 The NAïO Oz robot that can zip through and weed a farmer’s field. (Haggerty AgRobotics photo)

BOTHWELL — There is a surge in interest for robots that help with vegetable crops.

“There’s been an exponential increase in interest in these robots,” said Grant Elgie, agriculture innovation lead at Haggerty AgRobotics, at Bothwell. “We get lots of calls asking about the robots and they’ve been increasing, especially over the last 6-8 months.”

The global agricultural robot market reached a value of US$6.3 billion in 2021 and IMARC, a global market research company, predicts the market to triple by 2027.

Haggerty, the only Ontario dealer of NAïO and Raven robots, received its first NAïO Dino robot last fall and it has already been rented out for the summer. It’s a weeding robot for large-scale vegetable crops, with a real time kinematics (RTK) GPS guidance system that allows it to work autonomously. The robot detects crop rows with cameras and works up to 10 acres per day.

Farmers most often want robots to solve their labour shortage woes, said Elgie. The smaller robots, especially from the NAïO brand, are the most popular, he says.

Haggerty received two NAïO Oz robots this year—the smallest robot they have—and both were sold, so they ordered four more. This robot helps with hoeing, weeding, making furrows, seeding, and transporting. It also contains an RTK GPS guidance system and can weed autonomously for 10 hours straight. The Oz can be rented for $8,000 for a season or purchased for about $57,000, Elgie said.

The larger robots are “more challenging to get,” Elgie said.

Haggerty also has two Raven OMNiPOWER robots, one used by the company for spreading fertilizer for customers and the other rented out for the summer. This robot can interchange farm implements like crop spreaders and sprayers. It follows customizable path plans and detects obstacles with cameras.

“The biggest constraint on buying a robot right now is the time it will take to get here. With COVID, production and shipping are really backed up with these robots, so the ones we’re getting for this summer were ordered last fall,” Elgie said.