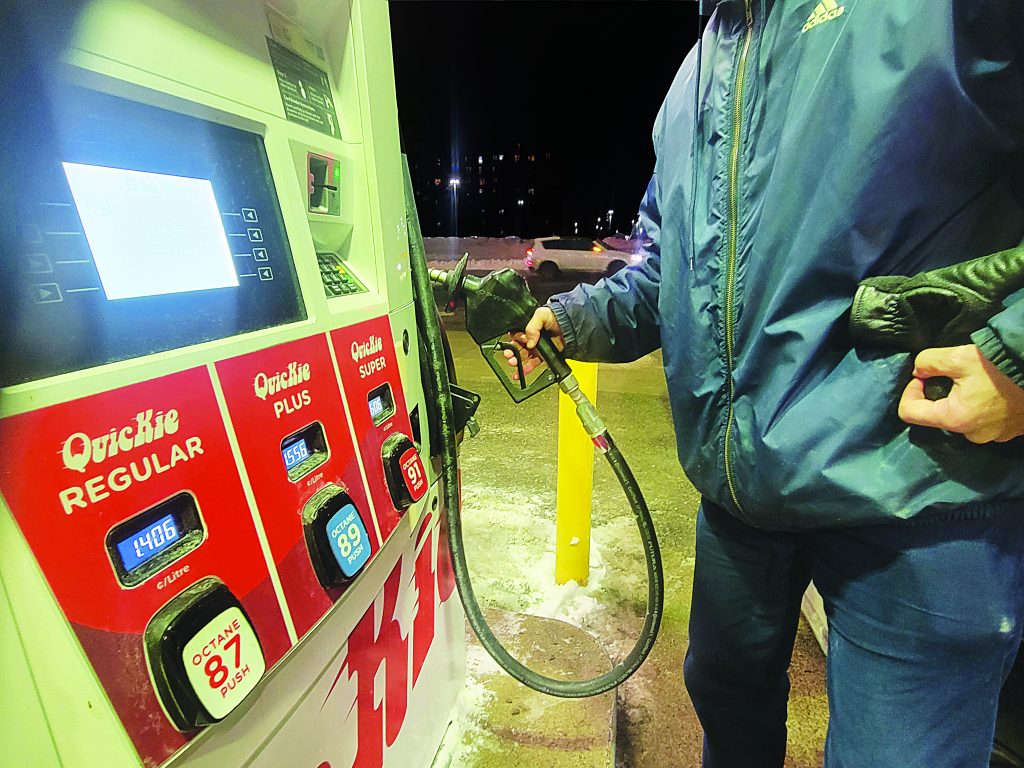 OTTAWA — Canadians have shelled out fuel taxes since 1925. But by the end of last century the tax started to hurt. By January 1990, a litre of gas cost $0.55 and included just under 19 cents in provincial and federal taxes.

More recent hikes at the pump are billed as a virtuous means of changing future weather.

So, if the gas price portion were fixed, tax alone would push a litre of gas by the end of the year to $1.39 per litre and 46 per cent of the price (or 63 cents) would be the portion you pay in taxes.

The punishment will only get worse as both of those taxes are scheduled to notch upward annually for the next several years. In 2023, the carbon tax starts an accelerated pace of 3.26-cent increases until 2030, while the Clean Fuel Standard will hit 16 cents in 4-cent increments, McTeague says. He forecasts gas pump prices could hit $1.65 per litre later this year. 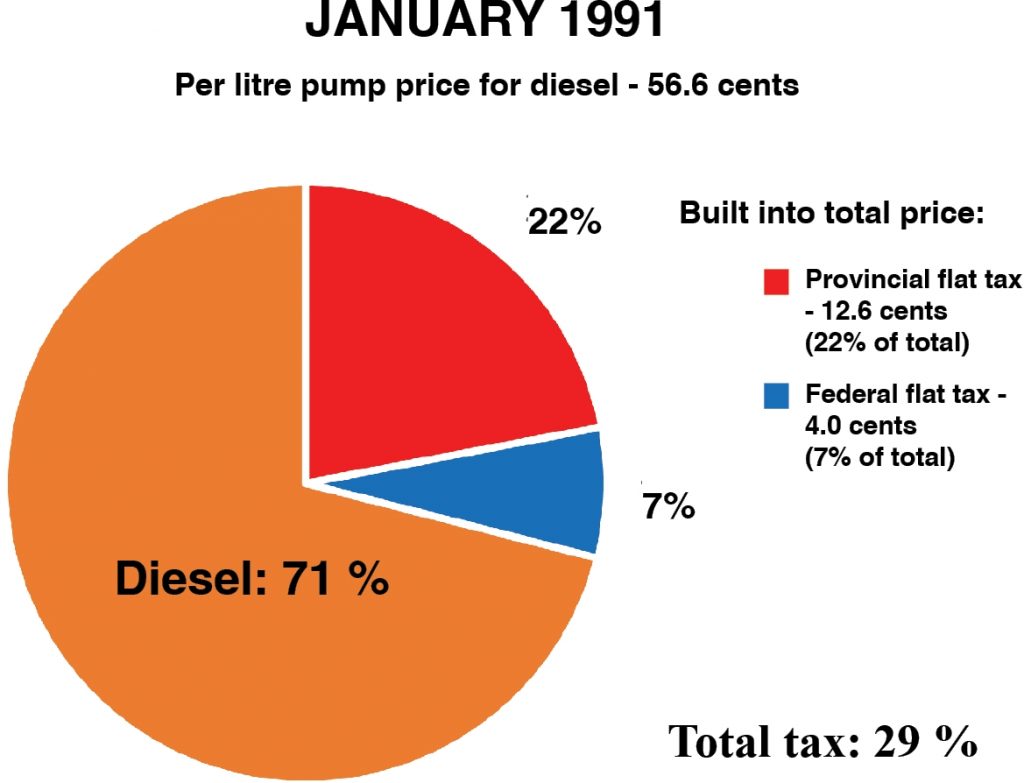 Provincial and federal taxes represented 29% of the cost of diesel fuel in January 1991, when the price was 56.6 cents per litre. A decade later, the price was 76.6 cents per litre, with just under 31% going to provincial and  federal coffers.  (This data gathered from a combination of Kent Group [Kalibrate] numbers, historical tax information supplied by the province of Ontario as well as Dan McTeague of Canadians for Affordable Energy.) 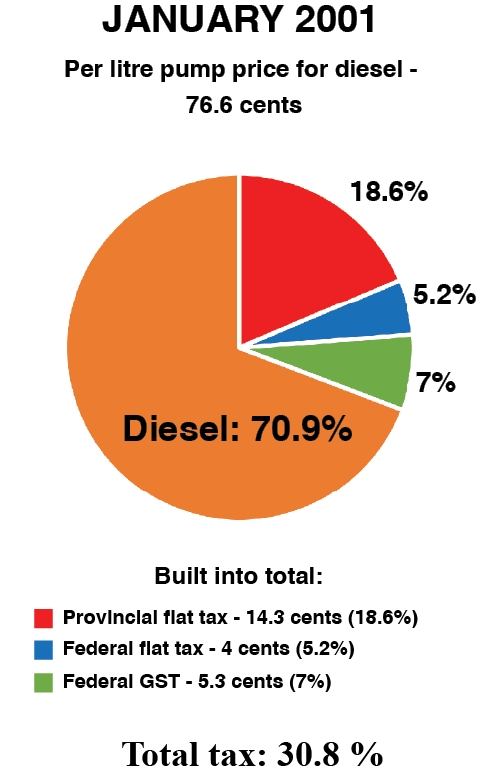 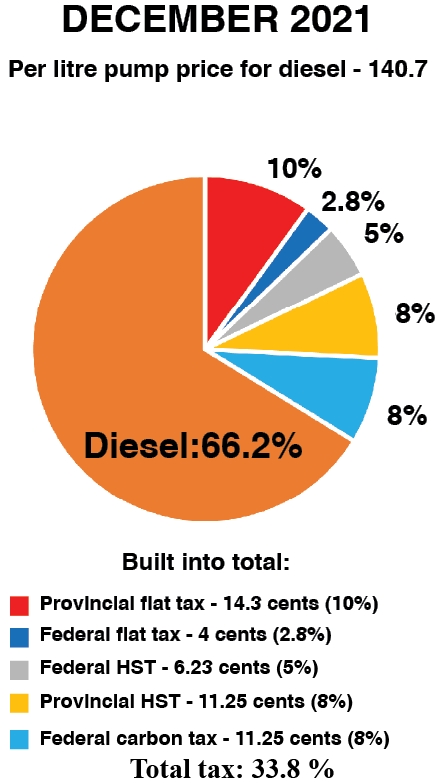 By December 2021, diesel was up to $1.407, of which the provincial and federal share had risen to 33.8% — including 8% allocated to the Trudeau government’s federal carbon tax. (This data gathered from a combination of Kent Group [Kalibrate] numbers, historical tax information supplied by the province of Ontario as well as Dan McTeague of Canadians for Affordable Energy.) 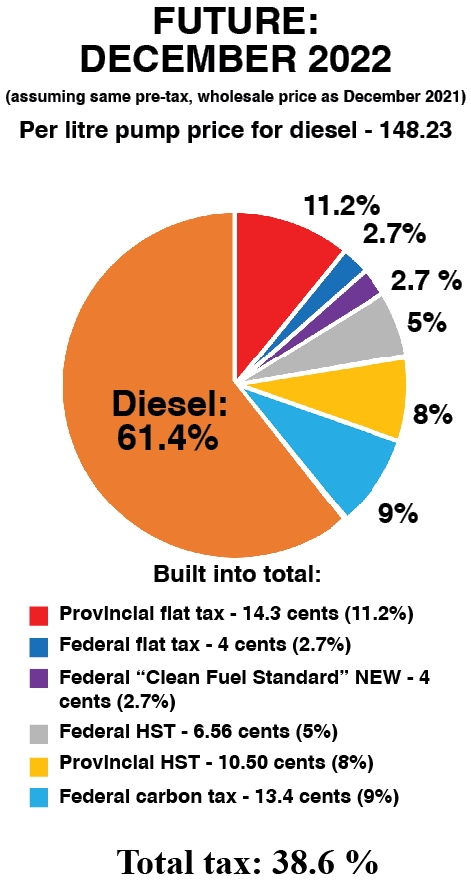 For December 2022, Farmers Forum extrapolated the same basic commodity price for diesel of a year earlier plus the additional tax hikes the Trudeau government has in store this year. Taxation’s share of the diesel pump price — including the impact of a new federal “Clean Fuel Standard” taking effect that month — will hit a combined 38.6%.