Most expensive farm in Eastern Ontario for sale: $4.03 million 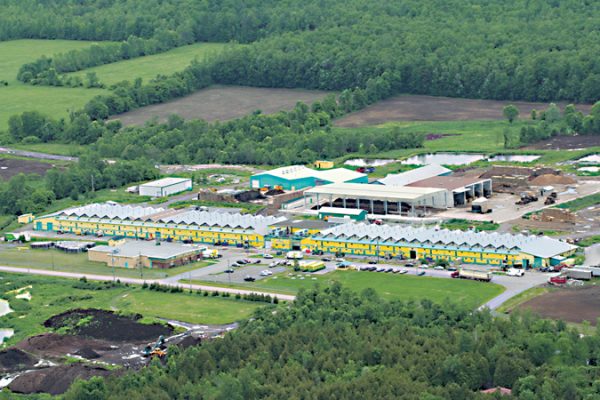 Continental Mushroom, at Osgoode, south of Ottawa, is for sale.

IROQUOIS — Ontario land prices jumped by more than 10 per cent in 2014 and have almost doubled in four years, according to a Farm Credit Canada (FCC) report. But those prices are now starting to level off, say Eastern Ontario realtors.

However, Marcel Smellink, of Smellink Realty in Iroquois, said the market has flatlined for the past six months. While farmers are willing to overpay for a neighbouring farm, the rest of the market has cooled, especially for larger farms of 300-plus acres. Crop prices are down and signs point to an interest rate increase late this year, he said.

Smellink cautions farmers to be wary when they hear of prices through word of mouth. A farm could sell for $15,000 an acre, but might include a house, barn and garage. When you eliminate those factors, that property could end up at $12,000 an acre.

Among the highest-priced farmland in Eastern Ontario last year, several parcels in the Chesterville-area sold for $13,000 to $15,000 per acre, Smellink said.

Allan Earle, of Culligan Real Estate at Brockville, was surprised by the FCC report.

“Last year, with commodity prices lower and the challenging weather, should have been a bit of a reality check,” he said. “It makes you wonder if we can continue to see this type of increase again in 2015.”

While location sets demand and price, Culligan said purchasers are now waiting instead of buying as soon as something goes on the market, which may mean more land on the market than in previous years.

The highest Eastern Ontario prices are currently in Lancaster-Bainsville, South Glengarry, Prescott-Russell, Casselman, St.-Isidore, Winchester and Chesterville, the two real estate agents said. Prices decrease as you head west until you get to Belleville.

The most expensive farm currently for sale in Ontario is located in East Garafraxa, north of Guelph near Orangeville. The 1,054-acre beef farm with a marketing capacity for about 4,700 head of cattle per year is yours for $16.5 million. It comes with two barns, bunk silos, feed bins, two roller mills, an 80-truck scale and five brick homes.

The most expensive Eastern Ontario farm is the 307-acre former Continental Mushroom Farm at Osgoode listed for $4.3 million.

Farmland sold to developers will generally fetch much higher prices. One 82-acre parcel at Vaughan, between Toronto and Newmarket, is listed at $55 million or $670,731 per acre.

The key to selling, said Smellink, is not to get greedy.