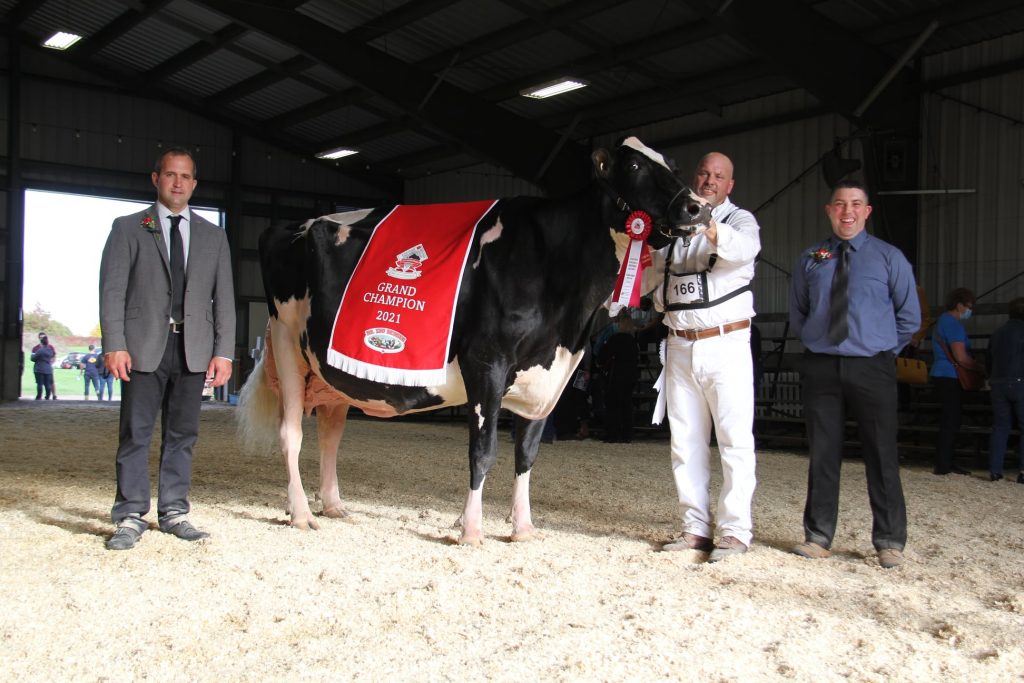 Born in 2013, Jeanlu Stanleycup Alexis — owned by the Farlinger family at Signature Holsteins in Morrisburg — came away as grand champion at the Metcalfe fairgrounds. Also recognized for Best Udder in her class, the well-known Alexis has come off a strong year. She won the Eastern Ontario Invitational this past August, and will compete again at the na- tional Holstein show in Saint-Hyacinthe, Quebec, this month.

Signature Holsteins co-owner Mike Farlinger described her as “quite an individual.”

“She’s a large cow, a big cow with a tremendous openness and capacity to her ribs, and … even at eight years old, moves really, really freely on her feet and legs,” he said.

Farlinger said they bought Alexis from Ferme Blondin about five years ago. At the time, he explained, Signature Holsteins was in the market for young, pedigreed show cow from which they could sell embryos.

Many of her embryos have since gone to Japan, though Signature itself has four of her daughters with another 7 or 8 expected over the next several months as well.

Werry observed that it was great to be back in the ring for the first time since December 2019 when he last presided over a Holstein show in Portugal. The pandemic kiboshed numerous shows, including last year’s Eastern Ontario/Western Quebec Championship Holstein Show. It’s one of the first bigger regional shows to return after a pandemic interruption, the judge acknowledged.

In another highlight, Christoph Uhr of Crysler — Knonaudale Holsteins — was recognized with the Breeder’s Herd pendant. Uhr said he would follow up by entering two or three animals in Saint-Hyacinthe.

When asked about the grand champion at the Metcalfe show, Uhr paid tribute to the way Alexis moves in the ring. “It’s a very complete cow, one of the nicest cows in the breed,” he added.

The 2021 show drew around 145 entries, about the same number as when her great- grandfather competed in 1941, said show announcer Kelly Fawcett-Mathers.