Money talks for 150 St. Isidore landowners who will get their gigantic wind turbines 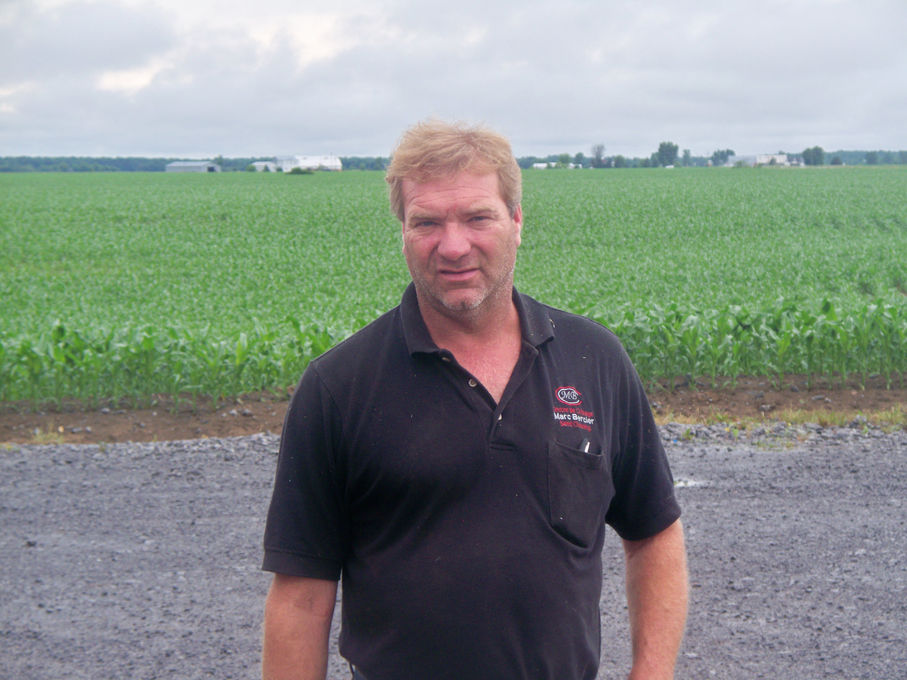 ST. ISIDORE — There will soon be dozens of wind turbines covering 10,000 acres of prime farmland here in Prescott County.

Marc Bercier’s 1,700 acres, just east of this village, will be part of this massive project, according to the 29 pages of documentation and contracts he provided to Farmers Forum.

Potentially, there will be five turbines and one substation on his property. EDF EN, Canada will pay a base price of $15,000 per wind turbine per year, plus incentives and/or compensation when necessary, and $20,000 per year for the substation. That’s $95,000 per year just to look at turbines along the skyline.

Bercier was an opponent of green energy projects when another wind power company was in the area a decade ago and when EDF built the existing solar farm just a few miles down the road. “I was against it,” he said. “It was taking up valuable farmland.”

However, the choice, this time, was stark. “If I didn’t sign, I would see the windmills without revenue.”

His conversion to finally sign in February was caused by “better money than eight years ago,” said Bercier.

Fact finding trips to the European Union, United States and in Ontario showed that original concerns, such as turbines potentially causing stray voltage in livestock, or freezing with ice in the winter, “had been solved by technology,” he said.

While people with cottages, such as on Wolfe Island, have legitimate complaints about seeing turbines, “we have no cottages and rivers here,” said Bercier. The vast swaths of flat land are mainly owned by cash croppers and some livestock producers, he said. There are only three operating wind turbine projects in Eastern Ontario – 86 at Wolfe Island, 10 south of Winchester and five west of Kingston — but others are coming.

Most farmers in Bercier’s area agreed and have signed up. Documentation obtained by Farmers Forum shows that as of March 2015, EDF had approached 165 people and 128 signed on. There were still 37 in discussion.

As of mid-June, nearly every one of those 37 have signed on, Bercier said.

However, one area cash cropper hasn’t signed and won’t. “I think the program is stupid,” he said, speaking on condition he not be identified. “They are Ponzi schemes and you’re buying your own power back. There is no net wealth created.”

Even though he has been “harassed” by EDF for a couple of years to sign, the cash cropper is standing firm in his refusal. “I have 700 acres smack in the middle of it,” he said.

Despite their differences on the issue, the cash cropper remains a good friend, Bercier said. “I respect his opinion. He’s a great businessman who has taught me a lot.”

However, the bottom line remains. “I need revenue and the township needs revenue,” said Bercier.

Bercier said he’s aware that liens have been registered on the land for the project but after “passing it by my lawyer,” he has no concerns that it will affect the farmers’ borrowing status.

But it means little. The municipality has no legal or legislative power to approve or turn down the project, said St. Amour.

On the other hand, 89 Ontario municipalities have passed futile motions that they are “an unwilling host” of green energy projects. “If the companies push for it and farmers want it, there is nothing the municipality can do to stop it,” said St. Amour.

By law, the companies must prove that 70 per cent of the affected residents, who don’t have turbines on their land, are in favour of the project, said Bercier.

Hans Spuehler, who has a shop on 1.5 acres beside his brother’s farm, which will host turbines, has signed on as not opposing the project, he said. “You benefit later by doing this, a one-time payment,” he said.

With an on-farm Hydro bill of $42,000 per year, Bercier is well aware that these green energy projects jack up the price of power for everyone.

“We had an election. The Liberals won,” he said. “People chose to pay more for electricity.”