Milk board policy overhaul could put more quota up for sale 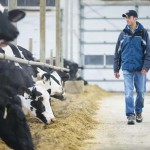 NEW DUNDEE — Keen to fill the barn he built for 100 cows five years ago, Graham Johnston wouldn’t blink an eye at buying double the quota he can his hands on each month — less than a kilogram.

Thanks to a new quota policy reboot, the supply on the exchange may be on the way up.

“This could be what allows us to grow a lot more, but who knows?” says the New Dundee dairy farmer, who milks 65 cows at Heritage Hill Farms with his sister and brother-in-law, Mary Ann and Joe Doré, and his parents, James and Frances.

But he doesn’t expect policies announced last month to put a sudden glut on the market. “I don’t think it’s going to be a big game changer right off the bat. I assume most farmers will keep going with the status quo. We’ll continue to grow bit-by-bit to fill the barn.”

In mid-July, the Dairy Farmers of Ontario (DFO) announced that non-saleable quota — essentially past quota increases that amount to about 10 per cent of holdings — would become saleable as of the August exchange.

As part of a policy review in the P5, which includes milk boards from Ontario, Quebec, Nova Scotia, New Brunswick, and Prince Edward Island, 10 per cent of quota from the sale of an ongoing operation must also be put on the exchange, excluding family transfers.

The hope is that farmers not filling their quota will sell, putting more quota in the hands of farmers primed to ramp up production, says DFO board member Nick Thurler.

“Progressive farmers were getting a little tired of not being able to grow. There are farms out there with barns that are not full and we need to get those barns filled,” he says, adding that some farmers grumbled about the potential lost premium in an ongoing sale.

Demand vastly outweighs supply on the exchange. There were bids for more than 10,000 kilograms of quota on the July exchange but only 442 kilograms available.

• The price cap has been reduced $1,000 to $24,000. But now that now that all quota is saleable, it actually means a price bump of $1,500, says Thurler. With non-saleable quota, farmers were taking an average 10 per cent price hit if they sold off all their quota.

• Farmers can apply for a linked facility — basically a one-time overflow barn, within 10 kilometres of the home farm, where they can expand for a maximum of five years.

• Starting in 2016, quota maximums for new entrants have also increased to 32 kilograms.

• A parent-to-child top-up policy could be unveiled next February, which would allow parents to transfer quota to a child that already has quota.

But quota policy isn’t the hot topic among dairy farmers. The possible ratification of the Trans-Pacific Partnership agreement has farmers worried.

But Johnston isn’t about to get worked up over media speculation.

“I’m not panicking over it. I like to sit back and wait for the dust to settle. At least we know it’s potentially coming. The European agreement caught everybody flat-footed.”