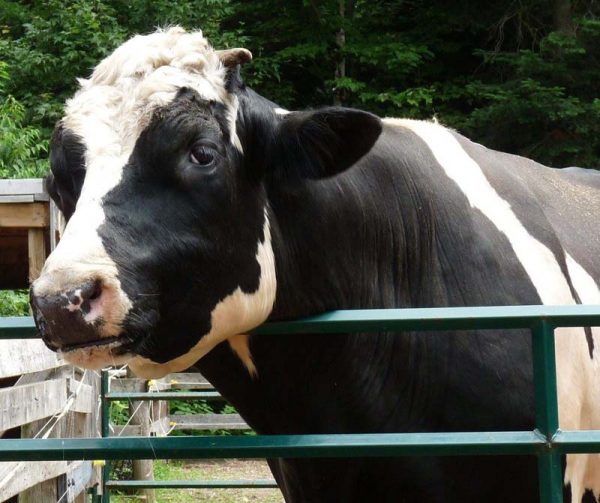 CLOYNE — When Barry Smith first saw Mickey Moo, the bull calf was three days old, couldn’t walk and was on its way from a sale barn to a slaughterhouse.

Smith paid $50 for the animal and carried it to the car.

“He was going to die, no doubt about it,” said the Eastern Ontario farmer. “We brought him home in the back seat of the car with two kids, and he’s been here ever since. He was always so gentle because he was always raised with the two children. He always gave kisses and you could hug him.”

Smith paid for the operation so that the bull calf could walk. But the now-grown bull recently attacked his saviour who might never walk again.

On Family Day in February, Smith had just finished petting Mickey Moo, now a 3,200-lb. 10-year-old bull, and was walking away when he heard a loud noise like a gunshot. The noise was enough to spook the bull, which started jumping around and escaped by somehow opening a gate. He then charged Smith.

“I didn’t even see him coming,” said Smith. “The question is whether the agitation triggered the animal to become aggressive, or whether he thought I was the one making the noise and he was going to make me stop.”

The bull kept attacking, crushing Smith’s ribs by slamming into Smith’s chest. Smith’s 15-year-old daughter, Darian, grabbed a stick and began hitting the bull. When that didn’t work, she fled to the house for help, telling her mom that Mickey had killed her father. Her mother called 911 while Darian ran next door to get a neighbour to help control the bull.

“She thought I was dead,” said Smith. “It was very traumatic for her, because in her mind, at the time, I had already been killed.”

Meanwhile, the bull kept attacking, rolling Smith over on the ground.

“He rolled me over to kind of finish me off,” he said. “As he rolled me closer to the edge of the truck, I reached out and pulled myself under. I had no feeling in my legs.”

The family started looking for Smith but couldn’t see him under the truck. He lay there, going in and out of consciousness and eventually managed to call out. It took an hour for the neighbour to control the bull to allow the emergency crew onto the farm. Smith was lying on the ice in -25 C weather for about 90 minutes. The cold temperatures slowed down the internal bleeding and probably saved his life, he said.

His heart stopped several times in the ambulance and at the hospital in Napanee. He had a broken back, a crushed pelvis, cracked ribs and internal bleeding. X-rays show that his left side, where the leg bone connects to the pelvis, was smashed to pieces. He is recovering at home, in a wheelchair but in high spirits.

“Best-case scenario, on May 20, they say I can start physio and I’ll be somewhat walking,” said the former pilot. “The worst-case scenario, they come back to me and say, you can’t walk again. I’m 65 and I’m a diabetic, so I have a couple of major issues I have to deal with that make it more difficult. If I were 20, I’d be up there dancing already.”

Smith and his family still plan to open the farm this season. The Land O’Lakes Rescue Petting Farm, located at Cloyne, an hour north of Napanee, is a not-for-profit rescue farm for animals and children. “Animals which have trauma themselves help heal children who also have trauma,” he said. “It’s a pretty amazing thing to watch.”

The Smiths are now looking for volunteers to help with cleanup, fence repair, and painting. Those interested can call the farm at 613-336-0330.

Smith said he will never bring home another bull. As for Mickey, he now lives on another farm.