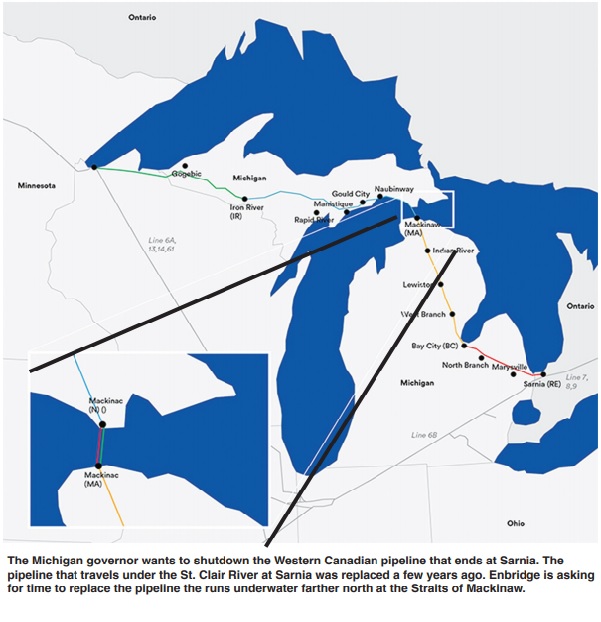 SARNIA — Will Michigan Governor Gretchen Whitmer shut down the vital Enbridge Line 5 pipeline, on which Ontario heavily depends for fuel and propane supplies?

Sarnia Mayor Mike Bradley told Farmers Forum that he still expects the “sun to rise” in May “and many dates afterward” — meaning continued status quo for pipeline operations — despite the governor’s May 12 closure deadline.

“The good governor is not saying much in the Michigan media about Line 5 or about her trip to Florida after asking everyone else to stay at home,” the mayor observed. “It’s good to see politicians can be just as stupid on both sides of the border.”

With a huge flare-up of COVID cases, “Right now COVID-19 is the issue in Michigan,” he said.

Enbridge is fighting to preserve Line 5 operations in state court until it can replace the pipeline section running through the Straits of Mackinac, between Lake Huron and Lake Michigan, a $500-million project the company has agreed to undertake. The pipeline carries Western Canadian oil over Michigan land to get to refineries in Sarnia.

The company maintains that Whitmer “doesn’t have legal authority to shut down the line,” said a knowledgeable source at Enbridge. “That’s what’s at issue in the courts right now, and that issue won’t be resolved by May 12.”

Fearing the pipeline could leak if struck by a ship’s anchor, Whitmer last year revoked Line 5’s 1953 state easement in the Straits.

Industry sources have warned that turning off Line 5 would put some 3,000 Sarnia jobs at direct risk and send the price of fuel and propane spiking upward in Ontario and Quebec. Canadian roads would be loaded down with hundreds of additional fuel trucks and railways everyday with more tanker cars to try and fill the void, according to Bradley, who has pointed out that Michigan itself depends on the line for half of its propane needs and the jet fuel consumed at the Detroit airport.

Farmers are concerned that the pipeline closure would prompt a propane shortage just as they’re trying to dry their crops this fall.