I never heard of fires being started by overheated bearings and causing a fire in the days when grain was threshed by threshing mills. I never heard or saw pictures of a fire at a threshing mill that burnt down the farm buildings. It probably happened somewhere but not in my neck of the woods.

In my youth, I did read about fires at sawmills and grist and our mills that destroyed the mills. Lots of mills were burnt to the ground. Probably because they were running steady and even operating night shifts while the threshing mills were only going two months of the year and not every day.

But if there ever was a fire hazard it was with the threshing mills — the chaff, the dry straw, pulleys and belts running and men smoking.

I thought about that the other day when I watched a 30-minute National Film Board program Country Threshing online. The black and white film is made by Wolf Koenig, a Canadian film director. It takes place on August 28,1958, and features the MacNaughton family and their neighbours threshing a 40-acre eld of oats near Huntingdon, Quebec, about 50 miles southwest of Montreal. 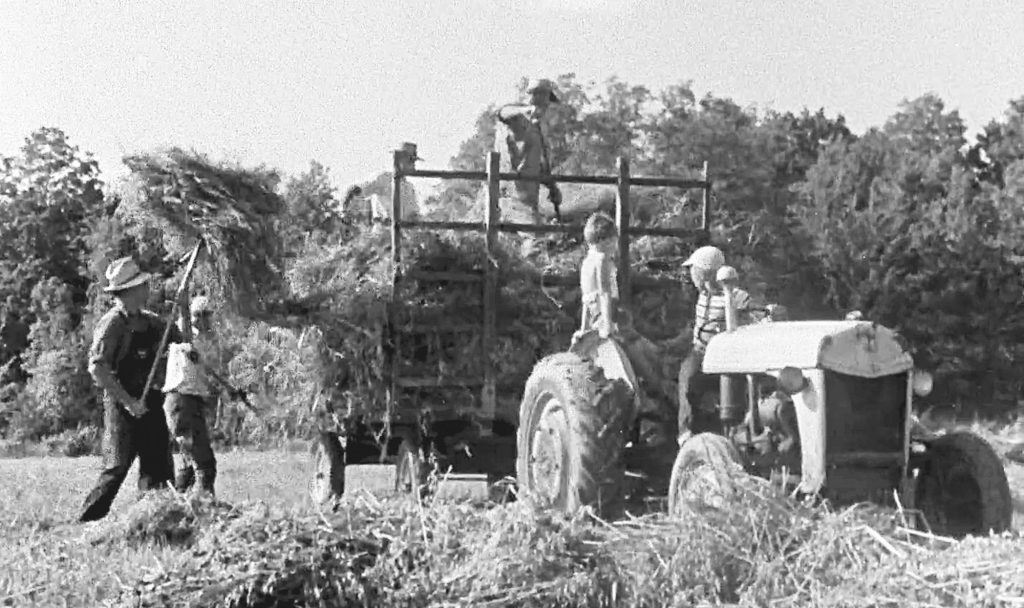 It’s all hands on deck in this scene from the documentary Country Threshing produced by the National Film Board.

He’s the boss man and gives a bad example. His father, Angus, is there too but is only referred to as grandpa. He might be the one sitting on the other end of the dinner table — who is also a heavy smoker. Some men wear bib coveralls and suspenders and are dressed as if it’s a cold day in November while others are in short sleeve shirts.

It had been a wet summer and the grain sheaves are long and awfully messy as they are forked into the jaws of the threshing mill. Not the neat sheaves I grew up with but then we had dry summers and the grain was usually short.

The narrator says that the 15 men, who gathered for the threshing, eat a real man’s meal at 12-noon sharp. Women in the kitchen prepare the big meal. The grandmother works the electric and wood stove and keeps an eye on every aspect of the food.

I thought I also saw two lemon pies go into the oven.

When the men come to the house for the “real man’s meal” they wash their hands and face in big washbowls that are lined up on a table outside. They cup their hands in the washbowl and bring it up to their face. Someone with a pail of water fills the bowls when needed. 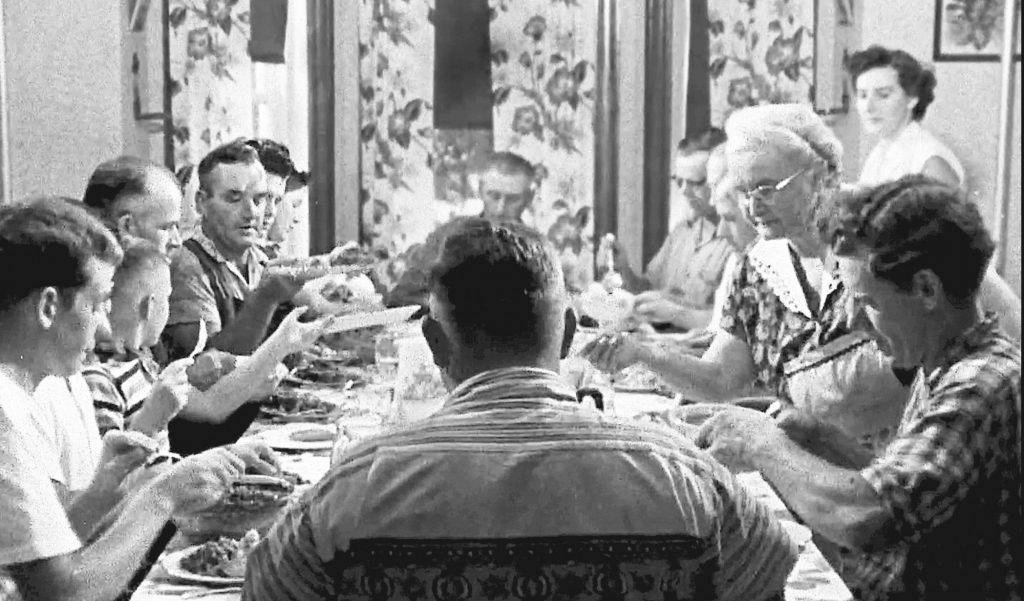 The women put on a huge spread for the workers in this lunch scene from the film Country Threshing.

The narrator says: “After lunch the men have half an hour to relax and chew the fat while the women clean up and do the dishes.” The men’s conversation is interesting to listen to as they sit outside in the shade. One man says the hydrogen bombs are disturbing the air currents and that is a affecting the weather. But another man says that we had that kind of weather before they started with the bombs. “We had snow here in June. I remember my grandfather said the cows were covered in snow in the morning.”

They discuss a possible moon landing. The man talking about snow in June said there is such a pull from the moon if they gure a way to get there and land on it, they can never make it back — there is such a pull. “It’s just a one-way trip. You’re getting pretty close to God, I’m afraid,” he says.

Country Threshing is a fast moving film that you can watch on-line for free. Just type in “Country Threshing” and you’re there. (If not, go to www.nfb.ca and search for it).

Maynard van der Galien is a Renfrew- area farmer and a long-time columnist.