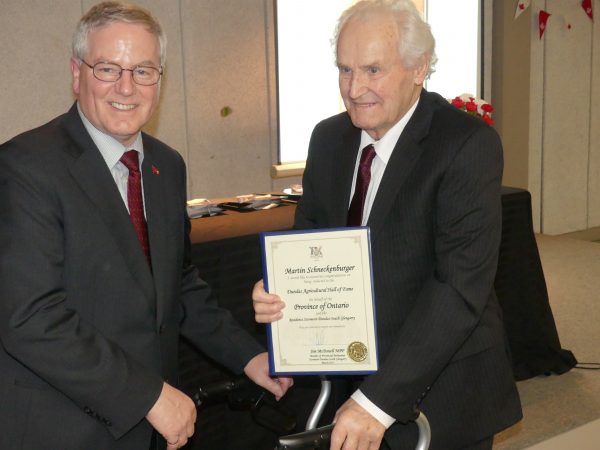 MORRISBURG — In 1956, German immigrants Martin Schneckenburger and his wife, Evelyn, purchased a 160-acre dairy farm in the Morrisburg area. It was the foundation of today’s multi-generation Cedar Lodge Farms, now much bigger and specializing in crop production exclusively.

And when he died peacefully March 15 at the age of 93, Martin Schneckenburger, one of five founding members of the Ontario Corn Growers’ Association and first treasurer of that organization, was long established as a regional and provincial farming leader and mentor.

The Dundas County Agricultural Hall of Fame, which inducted Schneckenburger during its inaugural 2017 ceremony, recounted some of his previous successes. He won the Award of Merit in the 1960 Dundas Pasture competition. That same decade, he bolstered his reputation as a Jersey breeder, receiving the Canadian Jersey Club certification annually from 1962 to 1969. He was Dundas Soil and Crop Improvement Association Farmer of the Year in 1967. He served as a director and president of the Dundas Federation of Agriculture for 10 years.

After he switched to beef cattle production in 1971, the local Cattlemen’s association in 1977 recognized him for promoting improvement in the Dundas beef herd.

The Ontario Institute of Agrologists recognized his accomplishments by granting him an Honourary Life Membership in 1996.
Scheckenburger arrived in Canada in 1951, working on a Toronto area farm and then at Canada Packers. He also worked as a school photographer and as a Fuller Brush salesman.

He met his lifelong love, Evelyn, also from Germany, while in the Oshawa area. At the time, Evelyn was employed as a dog-walker for the wealthy heiress of one of the large auto companies. She was out for a stroll with the owner’s two little dogs when her future husband heard her speaking his native language as he picked stones in a neighbouring farm field.
They were married in 1955 and her employer helped with the purchase of their Eastern Ontario farm.

They lived in their own residence until 11 months ago, when they moved into a care home together.

He passed away at Symphony Senior Living in Kanata. His wife of more than 66 years survives him. He’s also survived by: sons Andrew (Antonietta) of Markham, Arden (Rhonda) of Morrisburg and Steven of Burlington; grandchildren Warren Schneckenburger (Christine), Dayna Schneckenburger, Leslie Smith (Patrick), and Stella Schneckenburger; and great-grandchildren LiliAnne, Emilia and Catherine. He was predeceased by a sister and two brothers.