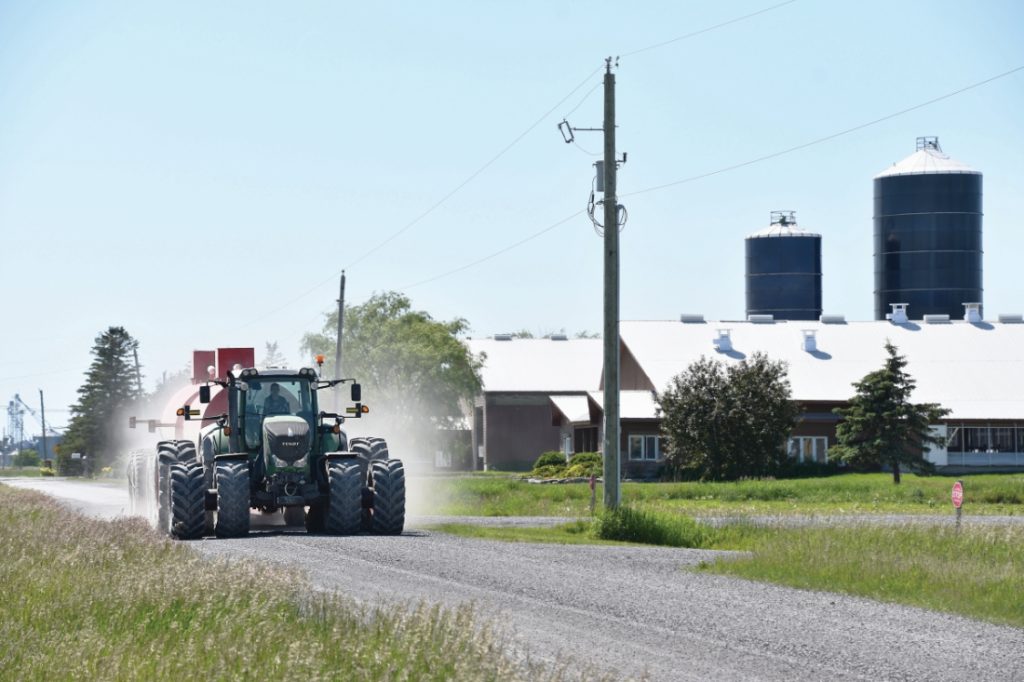 Canadian farmers are paying the price for Canada’s 35% tariff on Russian and Belarusan fertilizers.

JARVIS — Just as feared, farmers are often being asked to eat those new fertilizer tariffs this spring.

Matt Bergman, partner in County Line Custom Farming, a 3,000-acre organic and conventional cash-cropping operation at Jarvis, said he was retroactively charged the tariff by his supplier. The 35% back-charge was imposed despite pre-booking his fertilizer at a locked-in price of $1,060 per tonne for urea last fall — months in advance of the Trudeau government abruptly slapping the penalty on Russian fertilizer after that country’s February invasion of Ukraine.

The 35 % tariff applies to Russian and Belarusan fertilizer that wasn’t already “in transit” by March 2. To meet that definition and escape the tariff, incoming ships had to be within Canadian waters by that deadline, Grain Farmers of Ontario Chair Brendan Byrne has previously told Farmers Forum.

Costs are being passed along to farmers in many — though apparently not all — instances, despite a protracted lobbying effort to prevent it.

“It kind of blindsided us, a little,” Bergman said, adding his supplier “called us as soon as it was going to happen. It was probably the end of April, the first week of May. We got a letter and then my rep called me, too.”

He was already budgeting for higher fertilizer prices in any case, and the price has since gone up to over $1,200. He’s attempted to stretch his existing supply as much as possible for the hay, soybeans and corn at the farm.

He estimated his urea usage at around 40 tonnes this year. “We cut way back. On all of our hay ground, we usually do two passes, but this year we only did one,” he said. Bergman added he cut this year’s urea supply by blending in another, cheaper fertilizer product as well.
Essex cash-cropper Charles McLean said he avoided the charge on his fertilizer supply, after locking in his price last fall.

“Our supplier … didn’t know what the situation was going to be, but they clarified if you had locked in your price beforehand, they weren’t going to” charge the tariff, he said.

“Whatever we bought, we made sure we used, and we weren’t using more than what we bought,” he said. It was a “big time” relief,” he added.
Middlesex County crop farmer Jason O’Neil wasn’t so lucky. “The tariff has 100% been passed off to us,” he said.

O’Neil, who runs a 600-acre farm split between organic and conventional, said he typically buys fertilizer in the spring. His supplier informed him the price includes the tariff but that the Grain Farmers of Ontario was trying to get the government to rebate it back to farmers eventually.

Of his four fertilizers, he figured his cheapest was up 174% over last year. The most expensive was 284% above last year’s price, he said.
“All of the inputs are up. We can’t afford a bad crop, so we’ve got to bite the bullet and hope that it comes down the line. If we had these fertilizer prices and corn was $4 or $5 per bushel and beans were $12 per bushel, then it would be a different story. It would be a lot worse.”

The tariff “is a money grab by the Liberal government. That’s what it is,” said Woodstock-area cash-cropper Gordon Howe, who was back-charged on his pre-booked fertilizer. “It does no good for what they’re trying to do. They should put a tariff on Trudeau’s plane, that’s what they should do.”

The tariff “did not hurt the Russians in any way, shape or form. It only hurt the Canadian farmer,” Howe asserted. Farmers, he added, should be empowered to collect back the charge by adding their own 35% ‘tariff’ on what they produce, “and then we’ll find out what happens.”

Chesterville-area crop grower Marty Derks bought his fertilizer last fall — at a price he thought was locked in — only to find out his supplier intends to back-charge him an additional 35% to cover the tariff.

Derks, who declined to name his supplier, said he learned of the coming retroactive charge in a letter from the company earlier this spring.
“The irony is, how is it my fault? Should it not be the fertilizer company’s problem?” Derks told Farmers Forum. “Why am I supposed to pay the tariff?”

The impending charge applied to his pre-purchased fertilizer “unless I already had it in the ground,” he added. “It’s the way the contracts are written. It’s a loophole for them.”

Inverary-area dairy and hay farmer Gary Gordon said his fertilizer was dropped off, price unknown, because the supplier didn’t know if there was a tariff to be paid. “It was over three weeks before we knew what we were going to pay for it,” he said, adding the final cost was more expensive than he originally envisioned, and more than twice the cost from one year ago. “That tariff had to be worked into it. That’s why they wouldn’t price it, until they found out who was paying the tariff, and I know who paid it now: We did.”

At Oxford Agropro Ltd in Hickson, general manager Jack Aarts confirmed passing the tariff along to clients, including those who pre-booked. A letter went out to all customers to “inform them … about the tariff situation and what products were affected by it, and then we had one-on-one conversations with as many people as possible,” he said. The local business is part of the AgroMart Group, which in turn partners with Sollio, a major supplier of fertilizer in Ontario.

“Ninety-five percent of growers were quite understanding of the situation,” Aarts said. “There’s no great way to deal with it, and it’s just something we’ve got to deal with, and hopefully never have to deal with again.”

Russian fertilizers hit with the tariff include urea, phosphates, mono ammonium phosphate (MAP), and Urea Ammonium Nitrate (UAN). Aarts said that Sollio had to pay the tariff to the Canadian government upfront on material contained in six ocean-going vessels before those ships were even allowed into Canadian waters. He added that a couple of additional loads were cancelled altogether and alternative sources found.

“If we could have cancelled all of them, we would have,” he said. Doing so, however, would have left Ontario short of fertilizer this season.

Going forward, other global sources are available to replace the Russian and Belarusan product in the Canadian marketplace, he said, though “it’s going to mean higher prices.”

While there has been some recent softening of the urea price, the era of soaring fertilizer costs “is going to take a long time to correct itself,” he predicted.

The GFO’s Brendan Byrne agreed. “It looks like the price of fertilizer will be staying high for now,” he said. The GFO, he added, plans on sitting down with industry and government to come to some resolution on fertilizer costs and sources moving forward. Meantime, fertilizer alternatives will be more expensive than imports from Russia.

Byrne’s organization continues to lobby the Trudeau government for relief from the tariffs farmers have paid this spring, though he reported no response as of May 31. However, he said the GFO hoped to meet this month with Agriculture and Agri-food Minister Marie-Claude Bibeau on potential rebates for farmers.

Clare Kinlin, MacEwen Agricentre sales manager in Maxville, noted that his employer hasn’t passed along the tariff to MacEwen customers because, as an independent supplier, the company chose not to buy product from either Russia or Belarus and thus wasn’t charged the tariff by the government in the first place. MacEwen’s paid higher prices from alternative suppliers but did not increase the price on farmers who had locked in a price.

“I get asked lots of questions about how MacEwen is going to (charge the tariff), and I tell them, ‘We promised you a price, and that’s what we’re doing. We’re not back-charging you.”

MacEwen honoured its prices even as it had to find more expensive alternative sources of fertilizer, such as urea shipped in from western Canada by rail, he said. Phosphate — the other major fertilizer that comes from Russia to Eastern Canada — is also available from Morocco, he said. He also pointed out that the alternatives are often still pricier than the Russian stuff, even with the tariff applied.