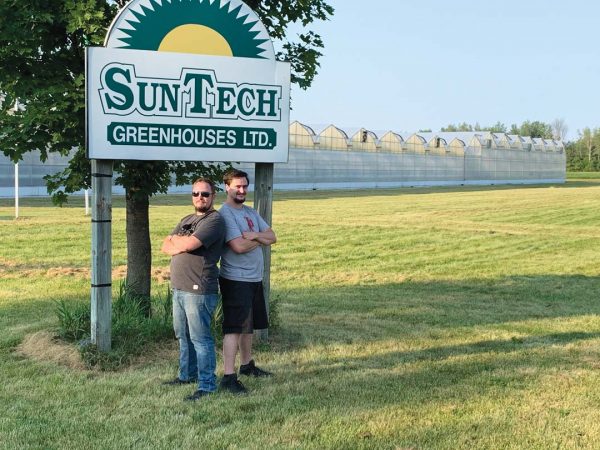 Devon Allin with his brother Benjamin.

MANOTICK — After starting the business from scratch and running it for 22 years, Robert Mitchell and wife Carmen Pérez sold their 23-greenhouse business to a Newcastle farming family.

In April of 2021, Brothers Devon and Benjamin Allin purchased SunTech Greenhouses, a year-round, hydroponic greenhouse spanning four acres of fresh produce, known for their tomatoes. The business had been listed for sale for the last year.

“Having a greenhouse is something we’ve talked about for the last five or six years. My brothers got really interested in it,” said Amy Rivers (Allin), manager and sister of the new owners. Although none of the three siblings has any experience with greenhouses, they all have farming experience under their belts.

The Allin siblings were the sixth generation growing up on their family farm. The family initially had a hog business, but when it became a dying market due to state mass production of pork about a decade ago, they switched to cash cropping corn and soybeans. Recently, the farm was sold and the family started looking for a new business.

“We were looking for something to invest in and came across this lovely greenhouse and decided to make the move. It was a great opportunity because the business was already fully running, we just needed to step in. My brother was like, ‘Hm, maybe we should buy a greenhouse,’ and then all of a sudden we were buying a greenhouse,” Rivers said.

The transition to Ottawa hasn’t been easy, but it’s worth it, Rivers explained. She is now in the process of moving her husband and four children from Newcastle to the capital. “It’s been a little stressful but it’s exciting. It’s a new adventure for everybody,” she said.

Of their 23 greenhouses, 20 grow tomatoes and three grow cucumbers. This year they’ve hired 12 foreign workers from Mexico, some who’ve been working there for already a decade, and six Canadians.

Mitchell and Pérez worked for three months after the sale to train the new owners. “(Pérez) really is trying to see us succeed in every way possible,” Rivers said. “She’s really pushing us to be everything we can and turn this greenhouse into everything it can be. She really wants to see this business soar.”

Mitchell and Pérez have semi-retired and will continue cash cropping.

She also expressed interest in turning to solar energy and branching into micrograins and fresh herbs, as they are trying to find new ways to grow SunTech’s market and add more greenhouses in the near future.

“There’s just a lot happening all at once, but the overall feeling is excitement,” Rivers said.