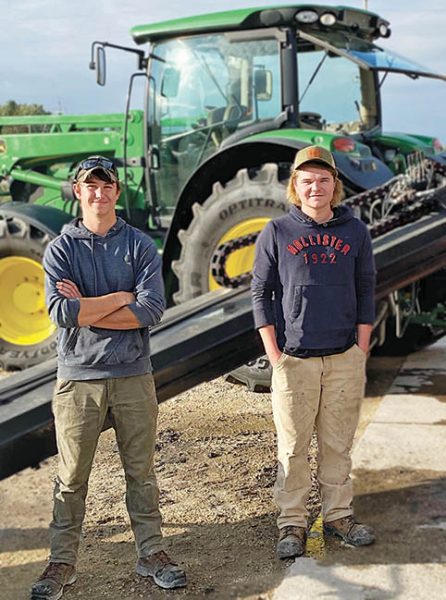 Malcolm ‘Mac’ McRae (left) and Liam Spence had no trouble finding a job on a farm out west. The pair are  working on a 12,000-acre cash-cropping operation in Manitoba, and enjoying the adventure and opportunity.

GLENGARRY — Two 18-year-old Glengarry County farm boys have been living out the classic Canadian call to adventure and opportunity, by heading west.

After almost three days of driving just to get out of Ontario, Malcolm ‘Mac’ McRae and Liam Spence crossed the border into Manitoba and arrived at their destination, a 12,000-acre family cash-cropping operation northwest of Winnipeg in early September.

The Pedersen farm is employing the duo into November for the harvest season. Travelling in Spence’s Toyota Tacoma pickup truck, they intend to move on to jobs in the Alberta oil and gas pipeline sector after Christmas.

They had no trouble lining up work on a western Canadian farm. A couple of well-placed tweets by McRae’s father on the boys’ behalf generated about 20 inquiries from farmers in need of experienced hands.

McRae’s father, Shawn, says there is strong demand for farm workers everywhere, especially those with some experience. He says any farm parent could help their teens get connected with jobs out west through social media.

The successful suitor, Myron Pederson, owner of the huge spread near the small town of Carman, Manitoba, “was very nice and offered a good job, so I took him up on it,” Mac McRae says. “He’s hired some guys in the past who didn’t have any experience, really, so he was glad to have us.”

McRae and Spence graduated last spring from the “agricultural specialist” program at Char-Lan District High School in South Glengarry Township. Mac McRae grew up on his parents’ Bainsville 400-acre crop farm, while Spence, a Martintown resident, has worked summers at nearby Glen Gordon Farms since the age of 12.

“I just kind of wanted to get the experience, just get away from home and make a bit of money and have a year in the working world before I go to college,” explains Mac McRae, who dreams of one day taking over his parents’ farm.

Pay is $20 per hour, he says, and they get free accommodations in a nice, 35-foot camper trailer. Pedersen and his wife have been great hosts, he says. A couple of times a week, the boys enjoy a meal with the family at the farmhouse. “If we’re late in the fields, he always brings us supper,” McRae says.

Otherwise, they buy their own groceries and prepare their own food in the camper. Spence says he considers himself “a pretty decent cook.”

The operation, which takes an hour to drive across, employs three other full-time workers with a couple of others likely to join for harvest.

The farm also has a fleet of three service trucks to bring tools, fuel and supplies to equipment in the fields.

Everything about agriculture in Manitoba is bigger, they say, including the machinery.

Mac McRae says he drove a 600-hp John Deere tractor trailing a 60-foot wide harrow — quite the debut for his first time harrowing — as well as dragging a roller set-up of similar size. They spent 13 hours in the field on one of their first days, and the harvest hadn’t even begun.

The host farm grows thousands of acres of canola, sunflowers, oats, soybeans and corn and owns and rents several combines and tractors that run all at once during harvest.

“I’ve been wanting to do this for a couple years,” says Mac McRae — who plans to enter the agriculture program at McDonald College in Montreal next fall.

“The most interesting thing I’ve done here has been touring around seeing the different crops we would not see in South Glengarry,” says Spence.  “I’m not sure what my future goals are in farming,” Spence says. “I just really enjoy it.”