ONTARIO — Black-legged tick territory appears largely unchanged in Ontario,  but with some observed expansion in the blood-sucking arachnid’s range between Peterborough and Durham counties.

That’s based on newly released mapping data from Public Health Ontario showing specific “risk areas” for Lyme Disease carried by black-legged ticks. The agency nonetheless continues to warn Ontarians about the possibility of encountering black-legged ticks anywhere in the province because the species is known to hitch a ride on birds.

Samples collected in summer 2021 were used to generate the 2022 map. The confirmed tick areas form an almost uninterrupted band hugging the St. Lawrence Seaway and around the heavily populated west end of Lake Ontario. This year’s map also shows the ticks’ habitat in Peterborough County has pushed westward a bit to almost link up with its Durham range and a connecting amalgam of zones leading into the heart of southwestern Ontario. 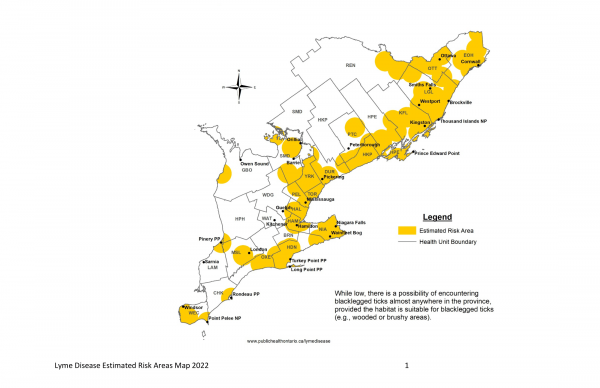 Each zone — or estimated risk area — is calculated as a 20 km radius from the centre of a location where at least one black-legged tick was found through drag sampling between May and October in the previous year.

Black-legged ticks become active as daytime temperatures rise above 4°C. If bitten by the species, you may be at risk of getting Lyme disease, which is caused by a bacteria.

While most tick bites are harmless, contracting Lyme disease can be extremely serious, if untreated, and can attack the heart and nervous system. Ontario health units offer a number of precautions to reduce the risk:

Tick specimens are not used for diagnosis of disease so they are no longer accepted at Ontario health units.