BREAKING NEWS
22:14
Home News Featured News LOVING THE RIDE: Bull rider explains why he does it

LOVING THE RIDE: Bull rider explains why he does it 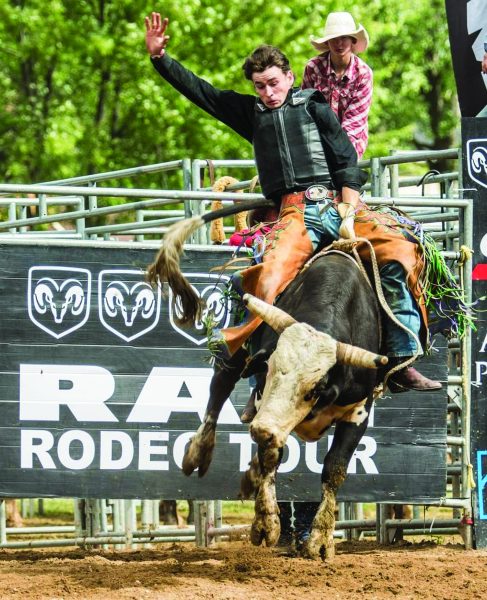 Eastern Ontario bull rider talks about breaking his ankle, getting nervous and loving the adrenaline rush

ATHENS— Emerson Moulton, 28, grew up on a family farm with beef cattle and horses.

He works full-time as an Ottawa Community Housing maintenance worker. But he is also a professional rodeo bull rider and will be competing in Metcalfe on Sept. 24-25. He recently spoke with Farmers Forum’s Irena Vélez.

How did you first get into bull riding?

“I was three or four years old and my aunt found this movie called 8 Seconds. I just happened to be sitting there watching it and from that day on, it’s all I wanted to do. My mom and dad fed into it too. They always thought being a cowboy was a good thing, so they got me cowboy boots and hats and they built me a bucking barrel. I was going to kindergarten with a cowboy hat on and boots. We used to ride sheep. If there was a local rodeo, we’d go do the mutton bust.”

Do you remember your first time riding a bull?

“It was in 2016. I finished playing junior hockey and had nothing else to do after, in the summer. I was done baseball too. One of the guys from Athens said that he was going to a bull riding school. Him and I went to it and I got on my first bull that day and never stopped. I remember I got bucked off in like two seconds, not even. I hit the ground running and it was the best feeling in the world.”

What equipment do you need for this sport?

“I wear cowboy boots, spurs with special rowels on them, and I wear chaps. You have a bull rope, a glove, a vest, and you can wear a helmet too or you can just wear a cowboy hat. I’ve done both, but now I’m sticking with a helmet.” 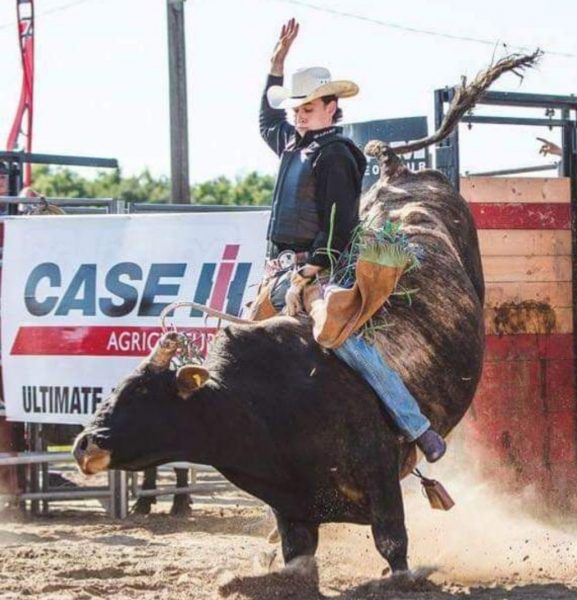 What are the most important techniques you use while bull riding?

“In bull riding, there’s three basic things. Keep your toes out and keep your spurs in, stick your chest out, and try to keep your shoulders, hips, and heels square with the animal.”

Describe those few seconds on top of the bull. Do you have time to think?

“You have to just react with what the animal is doing. Your first jump you don’t remember anything. Then after, your brain just slows everything down a bit and you start thinking about what you have to do. You’ve got lots of time to think. Eight seconds doesn’t seem that long but it’s a long time when you’re on the back of a bull. It’s pretty amazing how fast you can process things. If its front end is coming up, I’m thinking, ‘Drive to the front. Get up there with him. Meet him when he’s kicking and set my hips. Move my feet. Throw my free arm where I need to go.’ Stuff like that.”

Do you get nervous or scared before every bull ride? How do you mentally prepare?

“Yeah. You’re definitely always nervous. For me, once it gets going, my bull’s loaded, my rope’s on, it’s time to go to work. I want to be good, so that makes me nervous. I have to make sure I do everything right and I plan in my head what I have to do. My biggest thing is I try not to think about it until two seconds before I get on. I just try to clear my mind of everything. “

How do you train for your competitions?

“A lot of guys have a bucking dummy. It’s just a barrel with a post on it that bucks up and down. I would get on it almost every night. I run, do pushups and stuff like that, just try to keep myself in physically good shape. You have to be able to run and be flexible. A lot of professionals I know do yoga. As far as the bulls go, you get on maybe one or two a month at the most.”

Have you ever been seriously injured?

“I’ve got a broken ankle, it’s fractured. I broke it two weeks ago in Sainte-Tite, Quebec. I did something to my knee on Saturday in South Mountain. Before, I was out for a while. I got stepped on and broke three or four ribs on my left side, and cracked a couple of others. I’ve been very, very lucky. I’ve been knocked out three or four times. Torn muscles and stuff. Nothing major.” 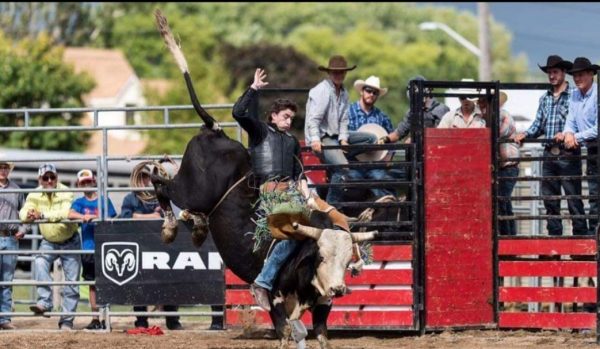 What makes you want to keep bull riding?

“It’s just the adrenaline rush or I don’t know what it is. I could never get that feeling again doing anything else.”

Do family members and friends worry about you? Who’s your biggest support system?

“My mom. When I called her the first time and told her I was going to the school, she had a long pause and said, ‘I guess I can’t really be mad at you because we raised you to love bull riding. I just never thought that this day would come.’ My sisters and my mom have been very, very supportive. My dad comes when he can, he drives trucks so it’s hard for him to always be there. But for my mom, if it’s within an hour or two away, she’s usually there to watch.”

How does the judging system work?

“For the rodeos we do, there’s two judges. They score the bull on how hard he was to ride or how high he’s kicking, how hard he’s bucking. And they’ll also judge you on how well and how in control you are of your body. If you’re riding good, they’ll give you a higher score. The perfect score is 100. Around here, the average would be anywhere from 70 to 85 points.”

Can you make good money from bull riding?

What are your plans for the future?

“I’m not sure. I’m kind of getting old and banged up a little bit, so we’ll see how much longer I go. I’d like to just do the best I can for as long as I can.”