BREAKING NEWS
01:18
Home News Featured News Love at first: they got into the goat business, then get married

Love at first: they got into the goat business, then get married 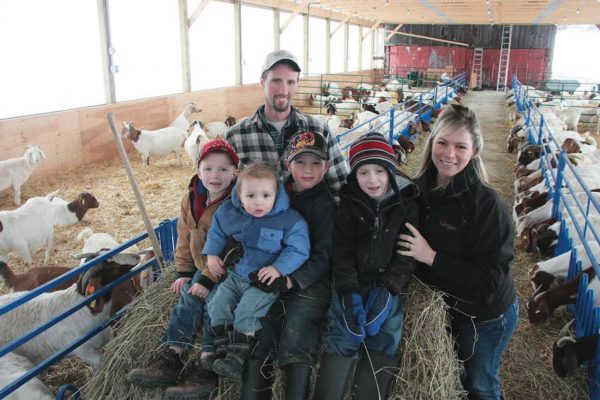 WOOLER — A whirlwind three-week courtship after they first laid eyes on each other, Ryan and Christie Prins were engaged and hatching a plan to pool their savings and set up shop on their own scrap of land: 50 acres of bare ground — with not so much as a fence — earmarked for their first eight meat goats.

They tied the knot the following January and seven years later, they have 200 top-quality Boer breeding does, crop 600 acres, milk 40 cows, and even find time to homeschool their four boys and sell market lamb on the side from their Wooler farm, 30 kilometres west of Belleville. The couple recently picked up one of two Ontario Goat advocate awards and were finalists in this year’s outstanding young farmers’ competition.

“People thought it would never last. Nobody says that now,” says 33-year-old Christie. “We’re not content to wait for things to happen to us.”

With no ready-made farm or fleet of equipment to inherit, goats were the dose of financial realism they needed to hit the ground running. After learning Canada imported as much as 60 per cent of its goat meat — imports grew 14 per cent between 2012 and 2014 to more than 2.2 million kilograms, according to Statistics Canada — the Prins were confident it was worth the $20,000 up-front investment.

They hired out field work at first, slowly expanding their land base and herd. Eight goats became 50, then 75 and 100. In 2013, they upgraded to a 500-acre farm and 200 breeding does, sold as breeding stock and market kids, most often to the livestock exchange in Kitchener and the local sale barn. Every cent went back into the farm as they built equity and trust with their lenders.

“You can start out very modestly and if you’re determined enough, you can turn it into something,” says Christie.

But it wasn’t enough.

Earlier this year, they got wind that dairy cow farmers down the road might sell. They hopped into the truck to introduce themselves.

Ryan, 28, quit his off-farm job as a dairy herdsperson when they took over April 1, doubling their acreage from 300 to 600 acres just ahead of spring planting. “It’s mayhem right now,” says Christie.

Goats were a stepping stone to dairy but won’t fall by the wayside, she says. They made a name for Pryme Farms in goats and want to tap into a growing taste for goat meat among immigrant communities and Canadians as a low-cholesterol alternative to red meat.

From the get-go, they set out to prove themselves.

They don’t leave their breeding program to chance, investing in quality genetics and planning crosses that yield total-package Boer goats that gain quickly and shine in the show ring.

But they wanted to back it up.

Right off the bat, they began in-house performance tracking. In 2013, they were one of the first to manage herd statistics with bioTrack online software. Since 2009, they’ve type evaluated, which is similar to dairy cattle classification. They’ve also put their genetics on display, earning multiple premier breeder, exhibitor, and herdsman banners at the Royal Agricultural Winter Fair.

The Prins sign on to every study that comes calling, including the goat herd improvement program with Kentucky State University and the Ontario goat meat traceability project.

All business, they cull ruthlessly — every goat earns its keep.

“We don’t have any pet goats. If the data isn’t there, that goat goes down the road,” says Christie. “If they’re not growing and getting to market at a reasonable rate, they’re not making us money.”

Confident enough to offer a guarantee on breeding stock, they have repeat sales from buyers coast-to-coast. “We really busted our butts to build respect for our herd,” says Christie.

With 400 to 500 breeding does, she estimates farmers could make a living on goats alone. Ontario Goat, the provincial association, has about 100 meat goat members but an accurate count province-wide is hard to come by.

There is no one-size-fits-all in an industry still in its infancy, she says.

Resources are scarce compared to other livestock and you have to be your own vet, with few proven on-label pharmaceuticals for goats. “I’d love to pick up an agriculture survey and not have to check off the ‘other’ column. We’ve had to figure it out as we go,” she says.

Goats are also labour-intensive, Christie warns, needing top-notch fencing and a creative feeding system. “It’s a myth that goats will eat tin cans. Goats are picky. They will waste a lot of hay.”

They always have goals waiting in the wings and refuse to quit. “If you don’t have that drive and motivation, you’re treading water,” Christie says.

But for now, they’re willing to slow the pace to get the hang of balancing two farms, with an eye to giving their boys — Keagan, Hunter, Russell, and Charlie — the chance to farm.

“We have four little boys and they are counting on us to make sure there is food on the table. That’s pretty motivating.”