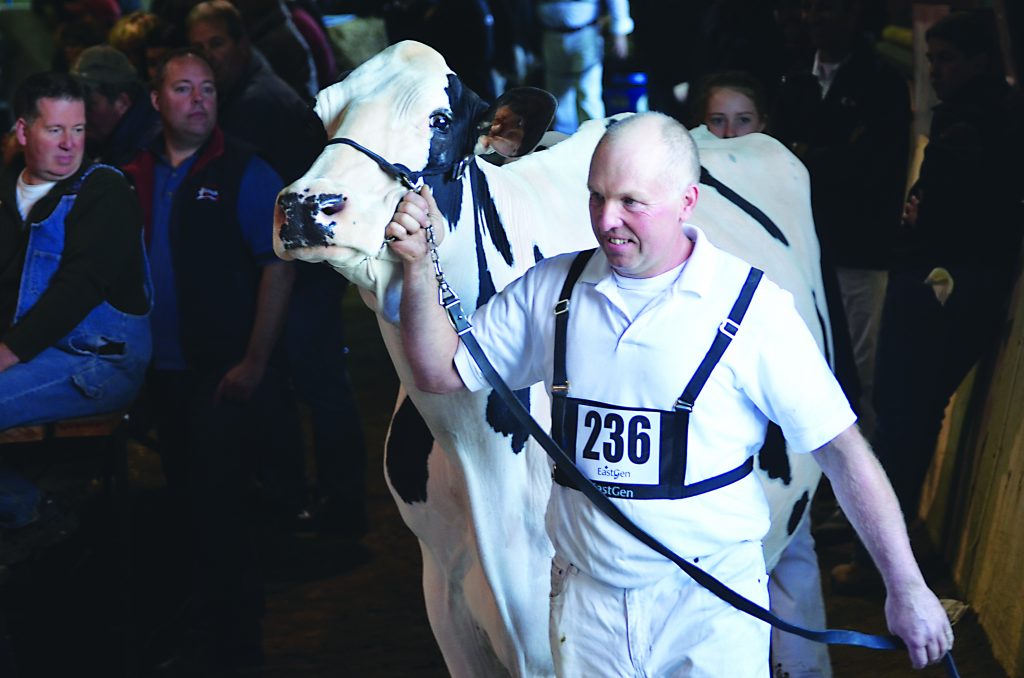 Herb Henderson has a reputation for showing great cows and the Toronto Royal was great for marketing, says Henderson, seen above at the Easterrn Ontario-Western Quebec Holstein Show when held at the former Kemptville College. (File photo)

TORONTO — Depending on your sport, the Royal Winter Fair is the Super Bowl, World Series or Stanley Cup when it comes to showing beef and dairy cattle. And for the second straight year, it has been cancelled due to the pandemic. It’s uncharted territory for the board of directors, which had only once before cancelled the annual November event in Toronto in almost 100 year history. “It was incredibly difficult to cancel an event as iconic as The Royal,” says Charlie Johnstone, CEO of The Royal Winter Fair. “All of our efforts are focused on 2022.”

The economic impact on farmers and breeders is a given, according to Russell Gammon, an almost 30-year Jersey promoter now with the Canadian Guernsey Association. “Some breeders go to the Royal, not expecting to make money but to use it as part of their longer term marketing plan. For other competitors, it’s about selling and getting every penny back from the costs of showing.

Dairy breeders are hopeful for a full return of the Royal next year according to Herb Henderson, Holstein Master Breeder at Hendercroft Farms at Ashton. “From a marketing standpoint you don’t have the ability to promote your animal,” he said. “We rely on the exposure from The Royal to sell our embryos and the cancellation takes that away.”

That is echoed by John Crowley, of Crovalley Holsteins, near Peterborough. “It’s a huge part of our genetic sales,” he said, adding they have been working harder at marketing their products without their annual pilgrimage to the fair. “At the Royal, the market comes to you.”

Without the Royal, breeders are using social media more than ever before. Crowley and his family have ramped up their marketing on Facebook and Snapchat. “You put up a picture and boom all of your followers see it.” Other online options for getting exposure and, in particular, sales is with companies like Unique Design or “tag” sales, where the buyer comes to the farm. “We did very well with it last year.”

Ari Ekstein, of Quality Holsteins in Vaughn, north of Toronto, has been showing with his father for at least 70 years. They know what a win means at The Royal. “It’s one of the best feel good accomplishments you can have as a breeder.”

The win can also translate into serious dollars. He reflects on 2019 and a Royal grand champion. “The sale of one daughter from that champion was $210,000 and a granddaughter sold for $44,000.”

Ekstein is hoping there will be some kind of national Holstein show in Canada, “but you can’t replace The Royal.”

Some breeders may choose to show at the Canadian Western Agribition in Regina this fall, which is planning a full show according to CEO Chris Lane. “We built a plan with a full schedule that will let us adapt to changing conditions.”

Lane is proud to tout Agribition as having all the National breed shows under one roof. “It’s never been done before.” Lane expects more breeders from Ontario this fall.

For beef breeder Billy Elmhirst, of the Indian River Cattle Company and no stranger to the Winner’s Circle, Facebook is now his number one marketing tool, posting photos and video three to four times a day. “You need a marketing program to make people aware of your win at the Royal,” he said.

Peter Frijters, of Premier Livestock, estimates cattle sales were down about 25% from before the pandemic. His farm uses Facebook and Instagram to drive marketing now. “It’s a huge audience, although you have to weed through the “tire kickers.”

Fritijers says Premier Livestock will take cattle to Agribition in Regina and the World Dairy Expo in Wisconsin but The Royal is still king. “We sell a lot of genetics through The Royal. It exposes our products to Canada and around the world.”

With about 300 000 people strolling through the doors of The Royal Winter Fair, it’s easy to see the marketing potential. And a win? “It really validates what we do as a breeding program”, said beef farmer, Brad Gilchrist, of Gilchrist Farms at Lucknow. “Our success depends on our results from The Royal. We do lean on it as a marketing tool. Before COVID, we used a lot of photos on Facebook, but since COVID, we use more videos, which are reaching more people. Gilchrist also uses Snapchat, to reach a younger audience.

Some breeders will make the trip to Regina for the Canadian Western Agribition or to Wisconsin for the World Dairy Expo to try and make up for the loss. The one thing they all agree on. They can’t wait for a return to the Royal in 2022.