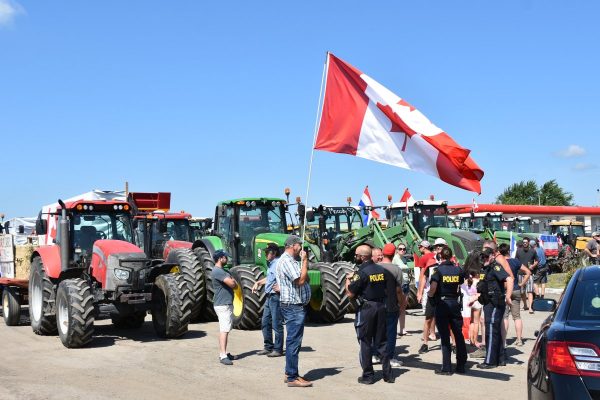 CASSELMAN — Eastern Ontario farmers rolled tractors and pickup trucks in a day-long show of solidarity with Dutch farmers who have for weeks protested onerous impending fertilizer restrictions and herd cuts in the Netherlands.

In the Nation’s Capital, a reported 200 people rallied in front of the Dutch embassy before marching to Parliament Hill.

In Casselman, upwards of 50 vehicles and tractors gathered at a gas station outside of town before forming a convoy that travelled east along Route 700 toward St. Isidore.

The Dutch government triggered mass protests by farmers after the June release of a plan to cut nitrogen fertilizer emissions 50% by 2030. The plan would also require some livestock farmers to reduce their herd size by that much or more. 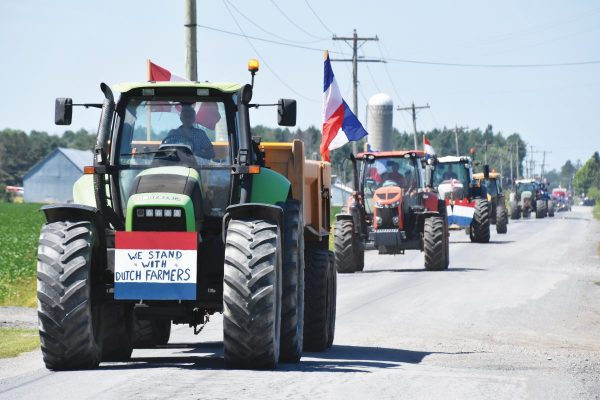 Farmers drove more than 40 tractors and other vehicles from Casselman to St. Isidore and on to a Dunvegan Farm to support their farmer cousins in the Netherlands, who oppose new restrictions on greenhouse gas emissions. (Nelson Zandbergen photo)

Freedom Fighters Canada promoted the show of support for the Dutch protesters in this country. And there was more than sympathy at play. Participants feared that Holland’s enforced nitrogen fertilizer cuts would come to Canada, too. It won’t be long before the Trudeau government’s “voluntary” 30% nitrogen reduction goal turned into a hard rule, they suggested.

“If they get away with it in one place, they’re going to try it somewhere else,” said St. Isidore custom operator Garth Franklin, who brought two massive Claas tractors to the Casselman event. “They’re almost certain to try it here. This is sort of firing a warning shot across their bows to say, don’t try that here. Just don’t go there.”

Below: Watch Farmers Forum footage of the parade rolling out of Casselman.

Franklin added that many of his farmer customers are of Dutch ancestry, and that his father was a soldier in the Netherlands during the Second World War. “I’m doing it for the Dutch,” he said.

St. Bernardin dairy farmer Andy Senn said he was concerned that Canadian authorities might get the same notion to unilaterally impose cuts in herd size. “And if you’ve got to reduce your nitrogen use 50 to 90%,” he added, referring to the plight of some Dutch operations, “you might as well quit.”

Senn was among a number of farmers of Swiss background showing solidarity with the Dutch at the event. Another was Josef Odermatt, a dairy farmer from Dunvegan. Odermatt briefly grew emotional when he expressed the need to preserve the farm for his grandchildren. “Today’s a really important day,” he said, noting that similar protests were also taking place in Germany, Switzerland, Austria, France, New Zealand and Australia.