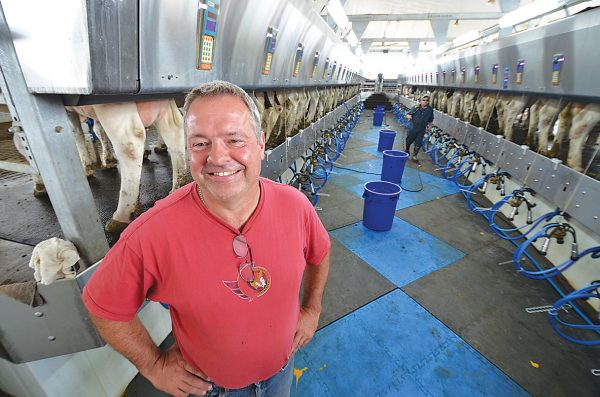 RICHMOND — When time ran out for their clapped-out double-14 parlour, the Schoutens went big: upgrading to a double-25, BouMatic’s largest parallel parlour in Ontario.

“We’ve worked hard, but you can’t do that forever. We’re all getting older. Did we want to work in a run-down facility for the last few years or did we want to build a beautiful setup that we don’t have to bust our rears in? We felt we could pull off one more barn,” says Rick Schouten, 52, who runs Schouten Corner View Farms Ltd. near Richmond with his brother Ed, 65, and his nephew, Chris, 40.

Two employees can milk 170 cows an hour in the double-25, which has a front bridge to exit all cows through one sorting gate that can redirect cows to a new management area with palpation rails and a vet room.

It’s not quite the largest parlour in Ontario, but it’s close. One of GEA Farm Technologies Inc.’s latest projects is a double-30 parlour near London.

Rotary parlours piqued their interest but seemed to need three dedicated milkers and Schouten says robots, like the nine Lely units used by their cousins next door, weren’t an option.

While they built a third freestall barn to stem overcrowding, robots would have required a too-costly revamp of their existing two barns, each housing about 250 cows.

“Our buildings were too good to walk away from. The dollars and cents would have been hard to justify,” says

Schouten, who also has 10 full-time employees with low turnover. “We didn’t want to lay a bunch of guys off.”

The Schoutens were also looking to the future.

“I’m not saying we want to milk 1,000 cows but the writing may be on the wall someday and if it is, this parlour is ready,” says Schouten.

Cows started milking in the new digs last December and time in the parlour dropped from 18 hours to milk 600 cows three times a day to just 12 hours. With extra stall, bunk and parlour space, production also edged up from 33 to about 38 kilograms per cow per day in no time.

Investing about $6,000 per cow for the new milking facility and extra space, the Schoutens also converted the 25-year-old double-14 to a single-14 to milk cows with non-shippable milk and installed a water flush system that saved an hour per milking. They bought two of everything, including two 7,000-gallon bulk tanks to allow milk pickups any time, day or night. There is even an office, boardroom, and staff room complete with lockers and showers.

“Maybe we went overboard but we were thinking for Ed and I, it’s our last barn. It’s our last 25-year shot at it. The years are going against us,” says Schouten.

It’s a good way to cap off 60 years. Their father, Bill Schouten, emigrated from Holland in 1952, buying the farm three years later.

“Our father would say ‘when you don’t move forward, you’re going backwards’ and I think he was probably right. It’s quite a facility and it’s something to be proud of.”