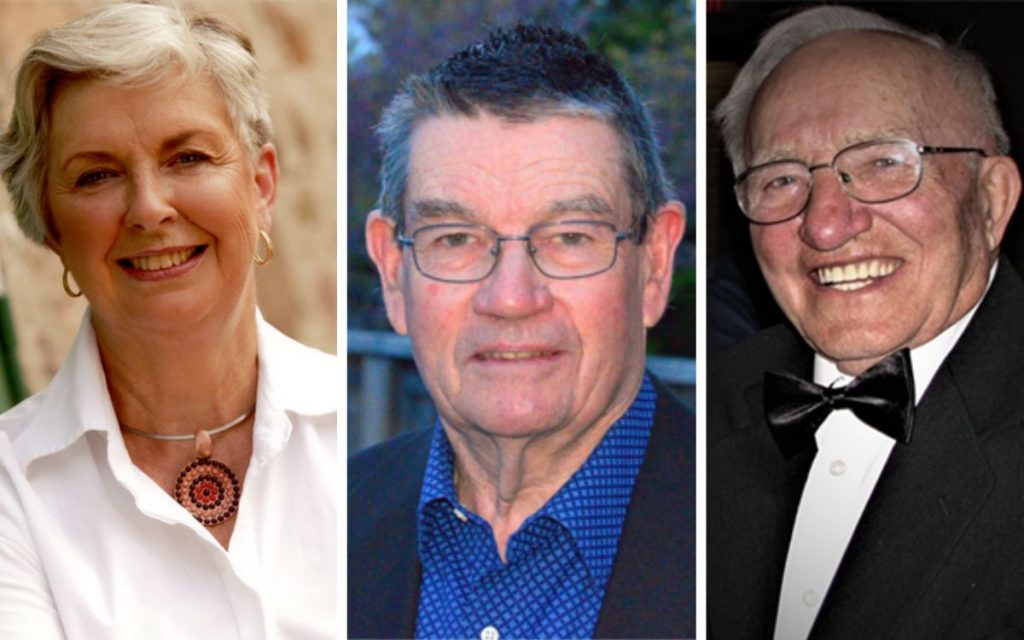 LAMBTON COUNTY — The Lambton Agricultural Hall of Fame has three new members: Carolynne Griffith, Mac Parker and the late Charlie Srokosz were inducted June 12 by the Lambton Federation of Agriculture.

The Hall is housed at the Lambton Heritage Museum.

Carolynne Griffith and husband — a 2016 inductee — grew an egg business together over the decades. Starting in 1965, their farm went from 50 to 1,500 acres and from 5,000 to 27,000 hens. Her son and grandson now care for 31,000 laying hens and 50,000 broilers.
Griffith was involved for years with the Egg Farmers of Ontario, becoming a councillor for her local zone in 1975 and a director in 1992. She was vice chair for 15 years after her election to that position in 2002. She also represented farmers in the five supply-managed sectors more broadly when elected chair of the ‘Farmgate5’ effort in 2008. In that capacity, she attended WTO meetings and trade negotiations in Geneva, Hong Kong and Brussels. She’s cited for 60 years of contributions as a leader, role model, and ambassador in the Lambton agricultural community and beyond.

Living by the motto of the Watford 4-H Club — “Learn to do by doing” — beef farmer Mac Parker bought his first farm at the age of 16, across the street from the family farm where he grew up. Parker graduated from Ridgetown Agricultural College in 1960 and began farming with his father.
A cow-calf operator, Parker adopted a cross-breeding system to ensure hybrid vigour. With a high-quality herd that enjoyed strong demand, he pursued new beef products like breeding bulls, 4-H Club steers, replacement heifers and consumer freezer beef. As president of the Lambton Federation of Agriculture, Parker advocated for stable farm funding, which led to the Ontario Farm Registry Program.

In 1955, Charlie Srokosz bought 120 acres in Lambton Shores and became one of the first people to farm the Thedford Bog. Only 20 acres of the rich soil had been cleared when he acquired it, but within a few years, Srokosz added another 90 acres to that total. A decade later, he was one of Canada’s premier onion growers, also producing other vegetables.
All of the celery used to make V8 juice at the Chatham plant came from Srokosz’s farm in the 1970s and 1980s.
The Ontario Fruit and Vegetable Growers’ Association recognized him with a lifetime achievement award in 2002. Also serving as his local township’s reeve for many years, starting in 1978, he’s remembered for his instrumental role in the founding of the Lambton Heritage Museum. Srokosz died in 2018.