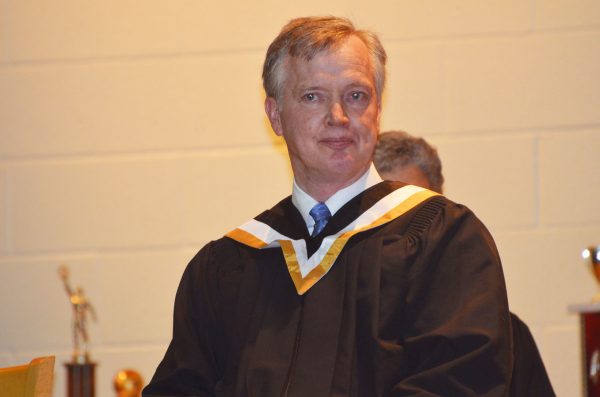 KEMPTVILLE — It would likely seem fitting to many Eastern Ontario farmers that the last Kemptville College graduation ceremony would include a swipe at the government that allowed its closure.

But the address didn’t focus on the fate of the 98-year-old institution but on the province’s weakness for politics over science leading to a ban on the most popular corn and soybean seeds in North America.

Saying that insecticide-treated corn and soybean seeds — known as neonicotinoids — are killing honeybees, the province is proposing an 80 % reduction in neonic-use by 2017. The Grain Farmers of Ontario calls this emotions over science.

“The competition agriculture faces today is far different from that which my father faced in 1940 or what I faced in 1980 after graduating from Kemptville,” said Howard Mains, who went on to get a master of business administration and is now the co-president of TACTIX, an Ottawa-based consultancy group for clients dealing with government decision makers. “Agriculture faces a battle for political understanding and support.”

“We are seeing this competition for political support play out here in Ontario in the debate over pollinators and the use of neonicotinoid seed treatments. Ontario’s regulatory decision is based on the weight of political evidence — the 50,000 Ontario residents who petitioned for the ban — not the scientific evidence.”

“Those of us in farm and industry groups called on the government to base its decision on the weight of scientific evidence,” Mains said. “But our voices were lost to the clashing of cymbals by a politically valuable constituency.”

In Mains’ “call to action” he told the graduating students to rethink how agriculture can gain broader community support amidst many competing interests.