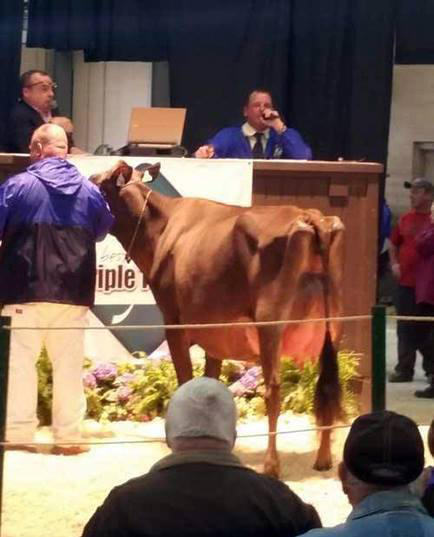 But even the Finch dairy farmer’s eyes bulged as he watched the senior two-year-old he bred sell for $267,000 US via a live Internet feed — a world record for a Jersey at a live auction.

“We just couldn’t believe it. Words can’t describe it,” says Robinson, who sold Mac N Cheese as a calf. “One of my customers tried to buy her at two days of age. He’s probably kicking himself in the butt now.”

In the lead up to last month’s sale in Columbus, Ohio, Robinson fielded a dozen calls from serious buyers, including a buyer from New York with $80,000 burning a hole in his pocket.

“I said ‘I don’t think that’ll be enough,’” says Robinson, who already has interest in embryos from her dam and semen from her brother.

Extremely long with a tall and wide front end, Mac N Cheese’s pedigree includes the two best cows Robinson has ever had, the great-granddaughter of an outstanding cow from the 1970s and 1980s, Elmvale Master’s Kate, and the Cecelia family, whose progeny have shone at the World Dairy Expo in Madison, Wis.

“Mac N Cheese isn’t a fly-by-night. You’re almost guaranteed to get a good cow out of that family,” says Robinson, who runs Payneside Farms Inc. with his wife, Jill. “Since the day she was born, you could feed her anything and she just wanted to eat and grow. She never looked back. No cow is perfect, but she’s the closest thing to it.”

Mac N Cheese attracted attention as a 4-H calf shown by neighbour Aimee Vanloon, but her udder is the show-stopper, says Dalkeith dairy farmer Donald McCrimmon, who owned a cow that won best udder at the Royal Agricultural Winter Fair in Toronto. Her udder is well attached with a rare deep crease, he says. “In the cow business, a good udder is one in thousands.”

Robinson had a hunch Mac N Cheese could go far in the right hands and didn’t hesitate to sell her to Hamilton-area dairy farmer Jeff Stephens in November 2013.

They put her on the auction block at the Best of Triple T & Heath Sale on April 2. After a fierce bidding war, George Malkemus and Anthony Yurgaitis of Arethusa Farm in Litchfield, Conn. took her home.

Despite the fanfare, 45-year-old Robinson says he’s still a student of the game. Raised in the city, reading every cow magazine he could get his hands on, Robinson started farming with his grandfather Ralph Mackenzie as a teenager, buying the farm when he was 25. “I wish my grandfather could see this,” he says.

It may just be the beginning for Mac N Cheese, a show-ring addict that Robinson is keen to see come up big at the Royal and the Expo.

“She always had her head up, looking around as if to say ‘bring me to the fair.’ I hope the best is yet to come.”