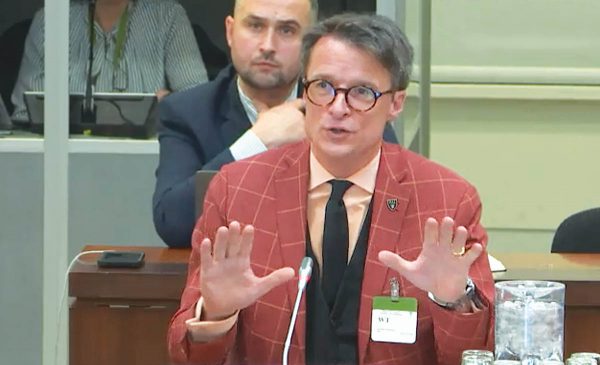 Sylvain Charlebois at the House of Commons Standing Committee on Agriculture Dec. 5.

OTTAWA — The House of Commons Standing Committee on Agriculture learned on Dec. 5 that the federal government has wiped out years of food data. While that hampers research and analysis, one critic argues it’s a political ploy to tamp down criticism of the government.

Here is the exchange in the standing committee:

John Barlow (CON- Foothills, Alberta): “You wrote in April that the government was deleting its food inflation data base maybe as many as 25 years of food data. Can you tell me if the government followed through and did wipe out that data from its database?”

Sylvain Charlebois (director, Agri-Food Analytics and Professor, Dalhousie University, Agri-Food Analytics Lab): “It did, actually. As a lab it has been extremely difficult and frankly frustrating to utilize StatCan’s data over the last several months. It has been very difficult to know exactly whether or not if the food inflation data is actually accurate. We have partners at the lab allowing us to better appreciate what is going on. We’ve had meetings with StatCan but the meetings have been challenging to say the least.”

Barlow: “Could they not have maintained that database somehow? What was the reason given? Was this a political decision, with record inflation? It just seems with today’s technology that is an odd decision to make – to wipe out 25 years worth of food inflation prices, which for you’re certainly as a researcher would be critical information to have available?”

Charlebois: “It would. There are lots of reporting practices at Statcan that I think are questionable.”

Spencer Fernando, who runs a Canadian political analysis newsletter, argued that a democracy needs easily available data to understand the past and make better decisions going forward. So, why delete this information? he asked. “History shows inflation is one of the things that brings down a government.”

The federal government is trying to rewrite the narrative, he argued, noting that the government is already massaging food price increases by swapping out higher quality foods for less expensive products to make inflation look better than it is.

However, the CPI is the “more precise” method of measuring price increases over time, he said, “because it accounts for variations in package size, brand name, consumer preference, as well as quality. In other words, a price can look the same but if the package is smaller, or the quality of a product declines, then the cost to the shopper has changed.”

While StatCan didn’t erase 25 years’ worth of data “for some things,” Professor Charlebois conceded, he told Farmers Forum that the Monthly Average Retail Prices for Selected Products table now goes back only to 2017.

“The reporting is also not consistent,” he complained in an email. “It’s been more difficult to get to the data we need than before. We won’t have December data until mid-February. Those are the kinds of things we are seeing.”

Charlebois noted that he wasn’t expecting the question about StatCan data during his December testimony at the committee and only had one minute to answer at the time.