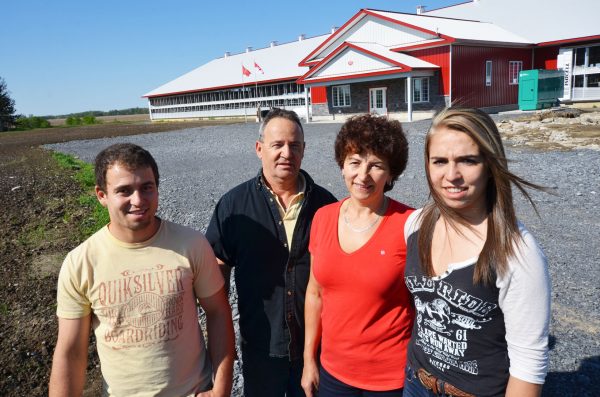 EMBRUN — Pierre Pasquier’s cows took to robots in no time, hitting nearly three milkings per day by the two-week mark and padding the bulk tank with an extra four litres per cow per day by month three.

“We were warned before start-up about buyer’s remorse. We never got that feeling. It was almost too easy,” says the 25-year-old Embrun dairy farmer, who runs Ferme Troitrefles with his parents, Jacques and Noelle, and his sister, Caroline.

Their old freestall barn was state-of-the-art when his grandfather Albert snapped it up after emigrating from Switzerland with two young boys in 1979. But three years ago they realized it was filled to the max. “Staying the same size wasn’t an option,” he says.

Pasquier was sold on robots in his first year at McDonald College but with the family still getting quotes on parlours, it took a few years and seeing them in other barns for his father to come around. Two Lely Astronaut A4 milkers are just the right balance of happy cows and family time, says Pasquier.

Here’s what farmers may want to check out at the Pasquiers’ June 20 open house.

Since the mid-November move-in, Pasquier only culled one first-lactation cow and his older cows — 35 to 40 per cent of the herd are third-lactation or older — are the robots’ best customers.

Within two weeks, the herd averaged 2.8 to 2.9 milkings per day and now holds steady at 3.1 or 3.2. In the old barn, 32 kilograms per cow per day was the best Pasquier could hope for. The cows hit a 36-kilogram average in three months.

“Now if it’s not over 35.5 or 36 kilos, I’m not happy,” he says, adding that he’s had to sell heifers. “It’s a good problem to have. If we hadn’t made the move, I think we would be biting our fingers off because we wouldn’t be able to fill our incentives.”

They’re now revelling in the flexibility and the added one-on-one time with the cows.

“I was never a big fan of being stuck in a parlour for hours. You’re like a machine, putting on milkers as fast as you can,” says Pasquier, who now notices cows in heat more quickly. “If a cow has to show me something, it’s a lot easier to see.”

Mastitis cases have dropped and they now average 80 per cent at the vet’s preg check.

When it came to barn layout, Pasquier wanted simplicity. “Design-wise, it all started with me playing with Google Sketch.”

From there, he worked with an engineer to minimize cow stress and farmer hassle. Dry, far-off, and close-up cows are all near the calving pen, which isn’t far from temporary fresh cow stalls. Moving cows is a one-person job.

A barn with four rows of stalls was as wide as Pasquier was willing to go: three rows for milking cows and one for heifers across the off-centre feed alley. “I can walk around the barn and see every single cow.”

With just one row of stalls, his heifers are immaculate — they never lie in the alley, he says.

Cattle six months and older are all under one roof to upgrade feeding to a drive-through TMR. Pasquier also tinkered with his Juno 100’s route to push bedding back into heifer stalls and push feed every half hour for two hours after feeding. “A lot more shy cows come to the bunk when feed is pushed more often,” he says.

Rubber on the manure alleys was a no-brainer for traction. Even Pasquier noticed the difference before it was installed. “After a full day of standing on your feet on concrete, you’re exhausted. An 1,800-lb. cow is comfy standing on rubber.”

To get rid of the manure bath ahead of the scrapers, Pasquier opted for a beneath-the-alley manure system: a two-foot-square concrete tube below a thin channel at the alley’s centre to quickly drain liquid. V-scrapers equipped with a paddle empty it into the collection pit.

Cows’ feet are cleaner and drier, with less foot rot. He has up to 75 per cent fewer lame cows.

But with six Big Ass fans, the Pasquiers were warned the alleys might be too dry, with a slimy film of manure when the scrapers go by. “It was almost like ice,” says Pasquier.

Jacques put his head together with the plumber and they came up with a flush system that sprays water twice a day from nozzles embedded in the stall curb every 10 ft.

Like the old barn, stalls have two-inch thick car foam mattresses and Pasquier doesn’t cheap out on bedding, with one-half inch deep of chopped straw and extra bedding two feet deep in front of the milking cows. “We stuck to what we knew and what was working.”

Even the calving pen has a mattress bedded with shavings. It’s sanitary and it’s only a 10-minute job to clean morning and night, says Pasquier.

They also stuck with air-inflated membranes from Secco for better side-wall insulation and ventilation. Even in the dead of winter, they go up and down, keeping air fresh and circulating in the barn, says Pasquier.

“There is no overcrowding. Cows express themselves in a more natural way. They lie like they would on pasture, with their front legs out and heads into the straw.”