BREAKING NEWS
13:42
Home News How flooding affects corn growth and how nitrogen comes to the rescue 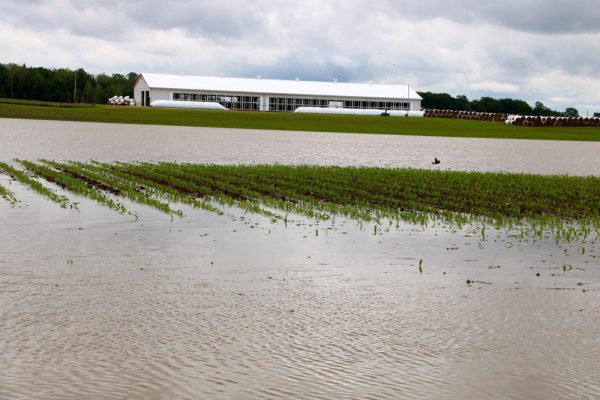 When flooding occurs, growers are concerned about corn growth and development and possible yield effects. The extent to which flooding injures corn is determined by several factors including:

1) timing of flooding during the life cycle of corn,
2) frequency and duration of flooding, and
3) air-soil temperatures during flooding.

Respiration is the plant physiological process most sensitive to flooding. Flooding reduces the exchange of air (oxygen) between soil and atmosphere eventually leading to decreased total root volume, less transport of water and nutrients through the roots to the shoot, and formation of sulfides and butyric acid that are toxic compounds to plants.

Measurable short term reductions for root and leaf growth rates begin immediately within one to 12 hours, but tend to recover quickly within two to three days. Almost immediately leaf elongation ceases and N, P, and K concentration in leaves decrease, but in roots N, P and K concentrations increase. Flooding restricts root growth in the upper 18-inches of soil, but root elongation continues in deeper horizons. Soil compaction and flooding will restrict root growth more severely than either factor separately.

All biological processes are influenced by temperature. Wet soils have a large heat capacity and considerable amounts of heat are required to raise their temperature. Thus, usually wet soils are cold and corn growth is slower. Drainage lowers the moisture content of the upper soil layers so air can penetrate more easily to roots, and transport carbon dioxide produced by roots, microbes and chemical reactions to the atmosphere. Lowering soil moisture content also leads to higher soil temperatures and faster growth.

The growing point of corn is metabolically active and is near or below the soil surface prior to V6 (six visible leaf collars). Within about 48 hours the oxygen supply in a flooded soil is depleted. Without oxygen, the growing point cannot respire and critical functions are impaired. If temperatures are warm during flooding (greater than 25 C) plants may not survive 24-hours. Cooler temperatures prolong survival. If flooding in corn is less than 48 hours, crop injury should be limited.

To confirm plant survival, check the colour of the growing point. It should be white to cream coloured, while a darening and/or softening usually precedes plant death.

Also look for new leaf growth three to five days after water drains from the field. Once the growing point is above the water level, the chances of survival improve greatly.

Even if flooding doesn’t kill plants, it may have a long-term negative impact on crop performance. Excess moisture during the early vegetative stages retards root development. As a result, plants may be subject to greater injury later during a dry summer because root systems are not sufficiently developed to contact available subsoil water.

A considerable amount of oxygen is required in the soil for mineralization of nutrient elements from organic matter by microbes. Oxygen deficiencies reduce microbe activity, decreasing the rate at which ammonium and nitrate are supplied to plants resulting in nitrogen deficiency in waterlogged soils. Additionally, flooding can reduce the activity of mycorrhizae essential for symbiotic phosphorus uptake.

Flooding can also result in losses of nitrogen through denitrification and leaching. Where estimated nitrogen loss is significant in fields not yet tasseling and yield potential is reasonable, corn may respond to additional applied fertilizer.

Flooding causes greater crop yield losses when it occurs early in the season. When six-inch corn was flooded for 24, 48 and 72 hours, corn yields were reduced 18%, 22%, and 32% at a low N fertilizer level. At a high N level, these reductions ranged from 19% to 14% one year and less than 5% in another year. When 30-inch high corn was flooded for 24 to 96 hours, yields were reduced 14% to 30%. But with a high level of N in the soil, very little yield reduction occurred even after 96 hours of flooding. When flooded near silking, no reduction in yield occurred at a high N level, but yield reductions up to 16% occurred after 96 hours of flooding at the low level of N.

Due to early season stress the plant may be predisposed to root and stalk rots later and harvest timing of fields may need to be adjusted accordingly.